The release of Naval War Arctic Circle makes a big splash in a relatively small pond. The genre of naval war games set on a tactical / operational scale is comprised of a very small handful of titles, namely Harpoon, Fleet Command, Global Conflict Blue, and the soon-to-be-releasedCommand. In a niche genre where many of these titles have gathered a small but loyal and passionate following, is Naval War destined to sink or swim? 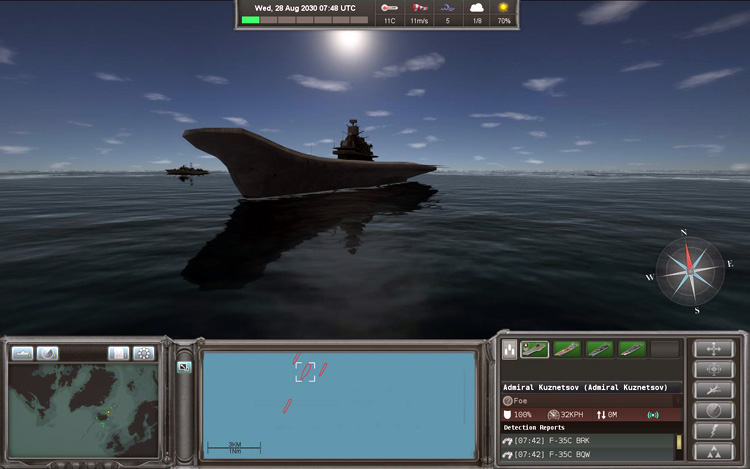 To be upfront with it, Naval War is a Steamworks game, which as far as I know means that you must be running Steam to play the game. Good news to some, bad for others. I purchased my copy directly through Steam and received a complimentary copy ofCommander: Conquest of the Americas. I haven’t tried Commander yet, but two games for the price of one is never a bad thing. The small package (under 800MB) downloaded and installed over the course of half an hour on my fairly fast cable connection. The game ran okay first go.

Once in-game and poking around in the settings, you’ll find the usual area of graphics quality settings and volume sliders.

The game puts you in command of ships, submarines, and aircraft at a theatre level. This means that you’re not zooming around in F-35s from the cockpit, or torpedoing ships through the periscope: it’s a top-down, RTS-style of a game.

The general game interface is divided into four different segments that are always present on-screen at any given moment. The map view is where you’ll typically spend most your time, as this is where you track the engagements, select units, and give move and attack orders. A 3D viewer is also present at all times, offering you a graphical representation of whatever unit you have selected. All platforms are fully animated in the 3D viewer: you’ll see your ships firing guns and missiles, your airplanes maneuvering, the works. The other segments include the typical mini-map and a status panel offering detailed info about selected units, along with quick order functions like turning sensors on and off and changing formations. 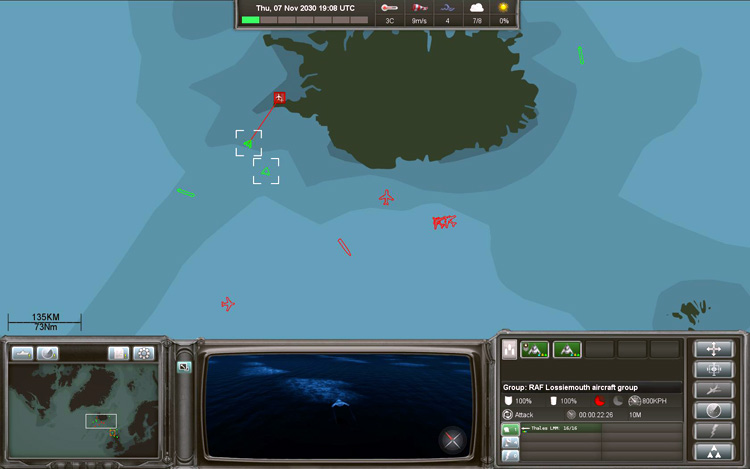 Now is probably a good place to mention my first major gripe with Naval War: ineffective use of screen real estate. Although the map view is perhaps the most important segment in terms of giving orders and knowing what’s going on, it only takes up about two thirds of the screen space at a maximum. 3D view is simply eye candy: you can’t use it to issue orders, and even the graphics aren’t all that spectacular. While you can disable it in the graphics settings, all that really does is replace the view with a blackened screen. The mini-map is also a bit useless, since you can zip around the map quite quickly with your mouse. There really should be more extensive customizability for hiding or rearranging the interface windows. 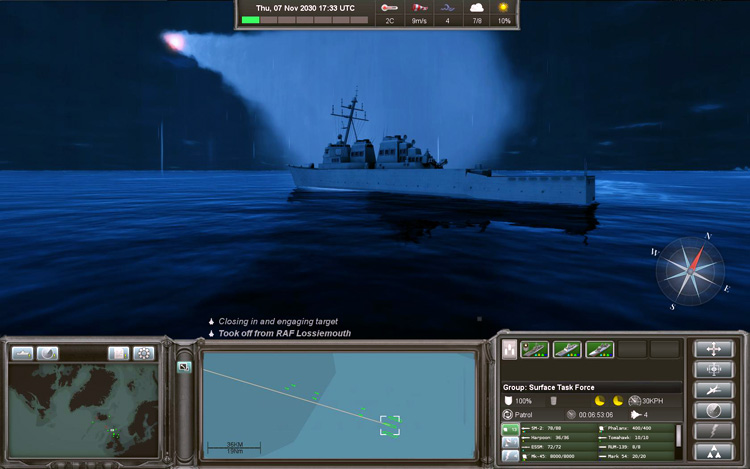 Ultimately, Naval War is about sinking the enemy before he sinks you. But at the heart of this is a nuance balancing act of managing defense and offence, sensors and stealth. Many of your units will come equipped with radar or active sonar that can sweep for contacts across miles upon miles of ocean. But, as in real life, use of these sensors also lights you up for counter-detection by opponents… So, succeeding in Naval War requires you to walk a delicate line: eschew your active sensors completely, and you’ll move along stealthily but almost entirely blind to the world. Bang away with your radars and active sonar’s and you’ll light up the whole world, including yourself. And this is a game of modern naval warfare, where long-range missiles are king: if you can see a target, more often than not, you can kill it. It’s a fun balance that adds a lot of tension and forces you to come up with clever ways to find your enemy, like employing cheap scouting units or fragile AWACS.

Overall, the game works pretty well. The AI is generally quite good in managing enemy fleets — it’ll hand your ass to you if you’re not careful — but could be better for smaller scale things like unit pathfinding. On one mission, I gave one of my small coastal corvettes a waypoint order to move into a narrow fjord for concealment. He began moving in a direct course to the waypoint, which resulted in him running aground. The game allows you to make chain of waypoints for delicate maneuvers like that, but I’d have appreciated if the AI would stop units from making suicidal moves like that. In other cases, patrol aircraft would drop a torpedo on an enemy submarine and proceed to fly off into the sunset as the sub evaded the torpedo, rather than press the attack. They’re annoyances rather than game breakers, but units do require a little bit of babysitting at times. 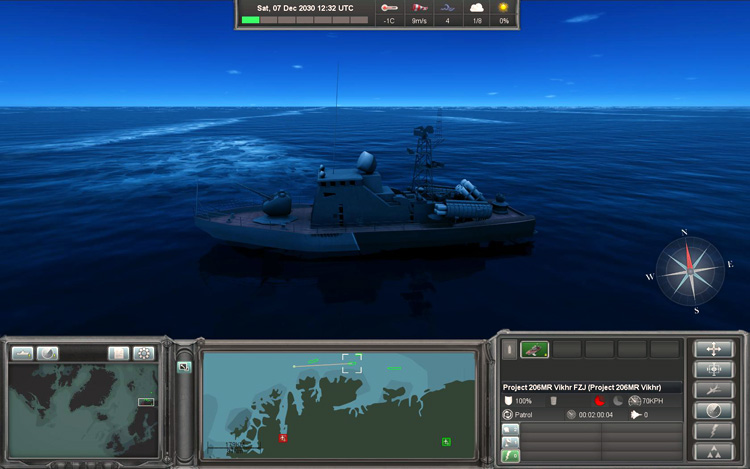 There’s also an interesting balance between Russian and NATO units. NATO units are typically newer and stealthier with precise, reliable weapons, but their air units have terribly short range. Russian units, on the other hand, are older and easier to detect, but their air units have long range and massive payloads. In one multiplayer scenario I attempted, the opponent and I had to guard our own airfields while attempting to destroy the enemy’s. He was able to keep a steady number of Backfire bombers in the air sending wave after wave of long-range cruise missiles at me. My Aegis destroyers were able to shoot them down fairly easily, but my own attack plan was comprised of an elaborate network of in-flight refueling planes and whiz-bang stealthy short-legged strike UAVs. There’s no in-game reference guide to help you understand the differences between platforms, so unless you’re a naval buff, stand by for a bit of confusion. Nevertheless, subtle differences in tactics and platforms add a twist by playing different sides.