Welcome to our newest CPU launch! AMD is today announcing their newest member of the XP family, Barton. While introducing Barton, AMD has also launched their newest and fastest CPU. AMD’s new flagship CPU today is the Athlon XP 3000+.

You might have noticed AMD’s new logo! I enjoyed the old logo but I must say the new logo looks very professional and I have been admiring it since I first saw it. Very nice AMD! We are including the family of new logo’s later in the article so be sure to look for it.

Seems like just the other day AMD was moving to .13m with Thoroughbred and suddenly, we are now looking at our last core (Barton) until ‘Hammer arrives. Barton is nothing to sneeze at and has some impressive new features along with some new issues so let’s discuss them!

As we discussed in our previous AMD Athlon XP review, Athlons are now running on a 333MHz FSB! This increased FSB speed is important to keep the Northbridge and Southbridge busy. As you can imagine, a slow FSB just means all the information your CPU is crunching is being bottlenecked while waiting to be transferred through the system. AMD has mentioned that they are reviewing the notion of a 400MHz FSB. Customer feedback can go a long way!

Remember that with Thoroughbred, we moved to a lower die size. I keep mentioning this because it is so critical to have a chip that runs cooler. We all know that heat is a computers biggest enemy so by reducing the pathways (die size drop), we have a cooler running chip. Barton carries forward with this new .13m die size, which has allowed it to increase in CPU speed to 2.17GHz.

You might have noticed that the XP 2700+ (Thoroughbred) part also had a core clock of 2.17GHz. This is somewhat confusing because you have two parts that are clocked the same speed but don’t seem to be performing on the same level (if you follow the PR ratings). It would follow that this is what AMD has been arguing all along. We have two CPUs that should (for all intensive purposes) perform differently but that are clocked, in MHz terms, the same. So the increased cache alone takes the PR rating from 2700+ to 3000+.

The packaging looks relatively unchanged aside from the actual die, which is now bigger to accommodate the new increase in cache. Yes, I said it had an increase in cache!! Barton is going to bring 512k of L2 cache that is equal to the L2 cache size of the Pentium 4 Northwood! YES!

Actually given that AMD has 128k of L1 cache, the new Athlon XP has retaken the cache crown from Intel. All Barton cores sport 640K of total cache. Very nice!

AMD has been long popular with gamers especially because of the popular socket A format. AMD has made a long term commitment to the Socket A format and Barton continues this tradition. If your interested in upgrading your CPU to a Barton, check with your motherboard manufacturer for a new BIOS that will support the Barton core.

Finally, let’s talk about availability. Typically, I would discuss this at the end of the article but I think availability is critical to a launch. What good does it do to talk about it if you can’t get it? Nothing!

In our previous CPU launch, AMD had trouble getting the 2700+ and 2800+ chips to the public. In fact, for the 2800+ CPU, it took months to get it out to the public. AMD was very careful this time around to ensure that they have chips on the street. A quick check on price watch shows that the CPUs are already being offered as availability of the 2800+ and 3000+ (both Barton cores) are immediate. You can buy them today! We will show prices in our conclusion but the best news is that you can own your very own Mr. Barton today!

We should point out that there will be a Barton core of 2500+ available soon. We agree with AMD that getting the higher-end parts out first should be a priority so do not expect to see a 2500+ Barton core XP for a few weeks.

Just about this time one year ago (ok, we are a month off) AMD and Intel both announced new chips. Intel introduced their new Northwood part at 2GHz while AMD introduced their XP 2000+ on the Palomino core. Before Northwood was announced, it was clear that AMD had a substantial lead on Intel in performance when the two parts were benchmarked head-to-head.

Intel’s new Northwood part was a .13m die drop from .18m and introduced 512k of L2 cache. The increase in L2 cache made this chip simply take off. Intel’s new parts suddenly went from slower to equal or faster in many benchmarks. Never underestimate the impact of increased cache. Typically, the difference is substantial. In other words, we were very excited to have a good look at our new Athlon XP 3000+!

Let us take a quick peek at the new specs for AMD’s new Barton before we get to our benchmarks:

Along with our shiny new AMD Athlon XP 3000+ processor, we received a new motherboard to use in our testing. NVIDIA’s nForce 2 chipset has been long awaited. With dual channel DDR and AGP 8X, it is one powerful product. Not to mention USB 2.0, IEEE1394 (Firewire), and 10/100 LAN the board is packed with features. 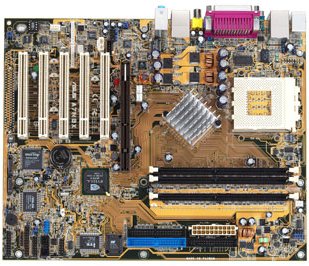 The biggest advantage the board offers is dual channel for the memory. With the memory not fighting for the same bandwidth, the system performance should take a nice boost in speed. Of course AGP 8X is nothing to sneeze at either!

To make use of the dual channel DDR, we were able to obtain some Corsair PC2700. A couple of sticks made our ASUS nForce2 board very happy. We installed one stick in DIMM0 and the second stick on DIMM2, which is offset to the side to make installing it on the second channel easy.

FRAPS 1.9 used for most benchmarks and all Direct3D benchmarks. Frame rates are an estimate of performance since none of these games have an exact frame rate utility.