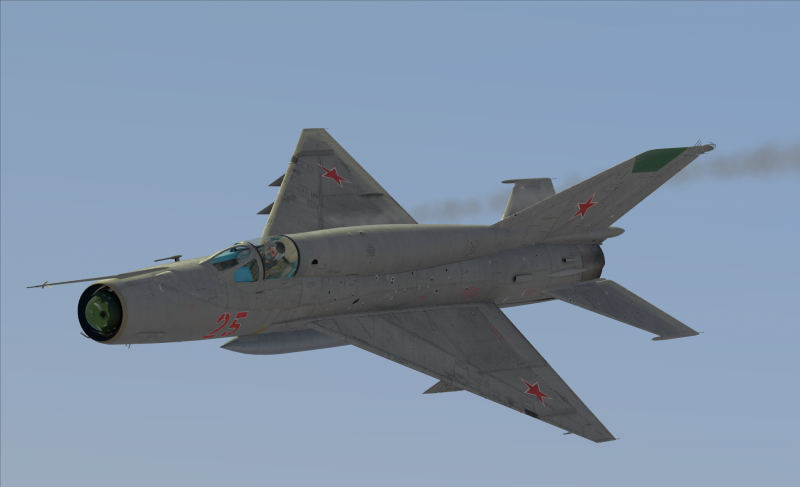 That’s probably not going to buff out.

The MiG-21bis has a sufficiently detailed damage model – in the screenshot above, I took a 23mm shot to the nose which fragmented the cone, resulting in catastrophic engine failure and a long walk home. Landing gear can be damaged on landing, bullet holes appear along the fuselage, etc. etc. etc. Although I was pleased with the level of detail presented, Leatherneck Simulations actually plans on implementing an even more detailed damage model. I’m very intrigued. 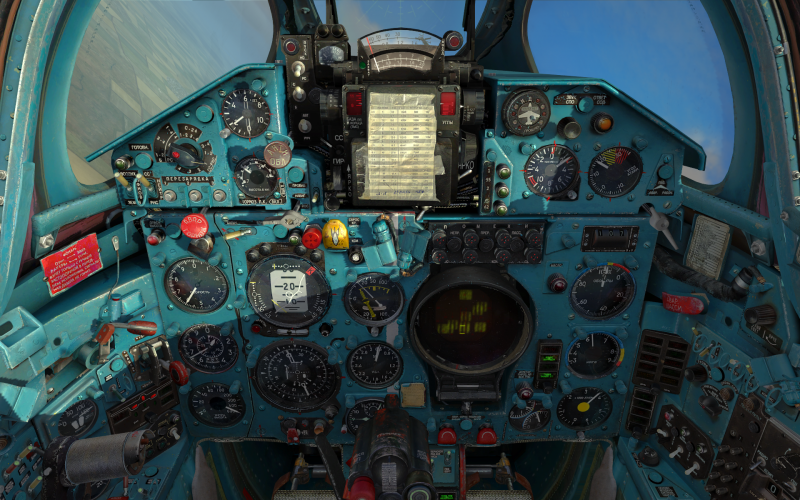 The new office is a bit cramped, but has a great view.

The interior of the MiG-21bis cockpit is chock-full of delicious buttons, switches, dials, gauges, lights, levers, knobs, and displays. Designed before human interface engineering was a thing, the MiG-21bis cockpit is workload-intensive, especially for the young nugget. The graphic designers at Leatherneck Simulations went all out on the appearance – finer details like scratches and scuff marks make the cockpit feel alive and real. The radar scope has a depth to it that is difficult to explain and impossible to capture in screenshots (I’ve tried). Scratches in the glass canopy catch the light at the right angles. Shadows from the cockpit play across the different surfaces. There are a few pieces of paper in the cockpit, each looking crinkly and with the yellowed and turned edges of aged paper. Even outside the cockpit, the air data probe bounces and shakes with aircraft motion – a seemingly minor feature that greatly adds to immersion. 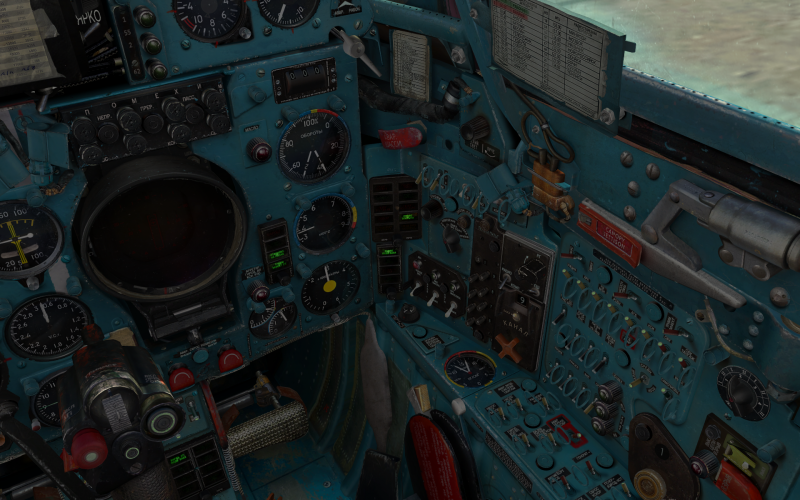 Will you LOOK at all those buttons! <drool>

Entering the MiG-21bis cockpit for the first time brought back heady memories of my first sit in the Ka-50 Black Shark’s cockpit. The almost overwhelming number of inputs and outputs with opportunities to learn interesting things about how this aircraft was designed and operated fills me with candy-shop delight and anticipation. I will be spending hours in this cockpit and enjoying every minute of it. What am I saying, I have already spent hours in it and I love it and am looking forward to hours more of playing with every clickable item in here. 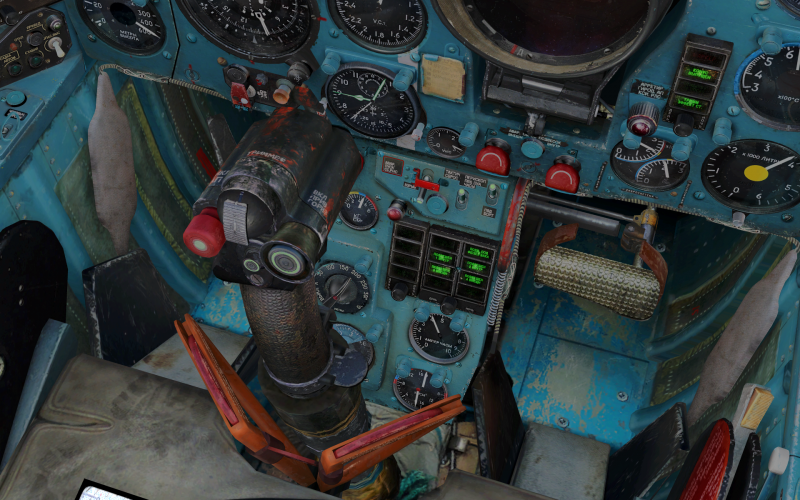 True to the standard we’ve come to expect in DCS World practically every switch, button, and lever is operable and almost every light and dial works, even the battery voltmeter. The few that aren’t implemented don’t have significant impact on using the aircraft and shouldn’t be missed by most folks.

DCS: MiG-21bis includes a realistic representation of the radio navigation equipment onboard the real MiG-21bis, the RSBN navigation system (similar to Western VOR/DME systems) and the PRMG precision landing system (similiar to Western ILS). The channel selection is performed through a device on the left cockpit wall and the needles on the KPP (an attitude direction indicator) and NPP (horizontal situation indicator) all operate as expected. The system works similar to their Western equivalents, enabling long-range navigation, instrument landings, and even instrument traffic patterns. The navigation tutorials that come with the module cover these systems and how to use them in satisfying depth. 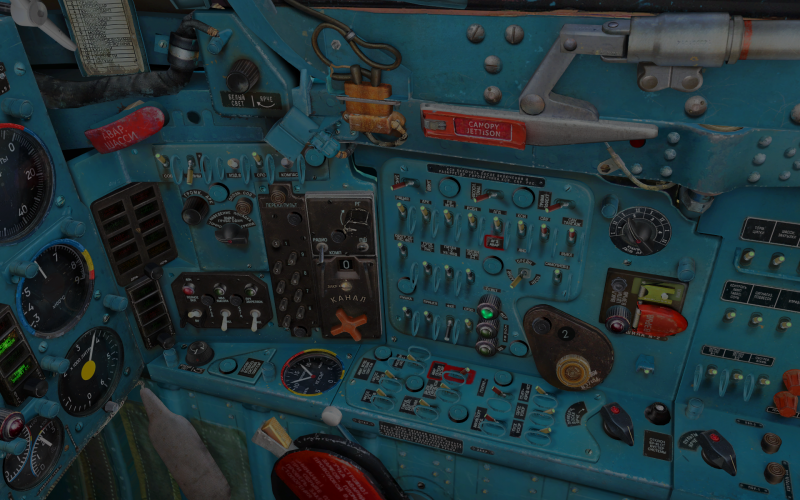 SO MANY SWITCHES! BUTTONS! AAAAUUUGHHhhh…

Even with the sea of cockpit controls jutting up at every angle, the MiG-21bis is relatively straight forward to start up. With no inertial navigation system, there’s no GPS signals to track or gyros to align and warm up. The engine start is the longest single process and a quick pilot can have their MiG ready to taxi in under a minute. Forgetting items like the pitot heat, weapons pylon power, and setting the radar to stand-by will bite the overeager pilot, so stick to your checklist and use practice and routine to speed up your scramble time. 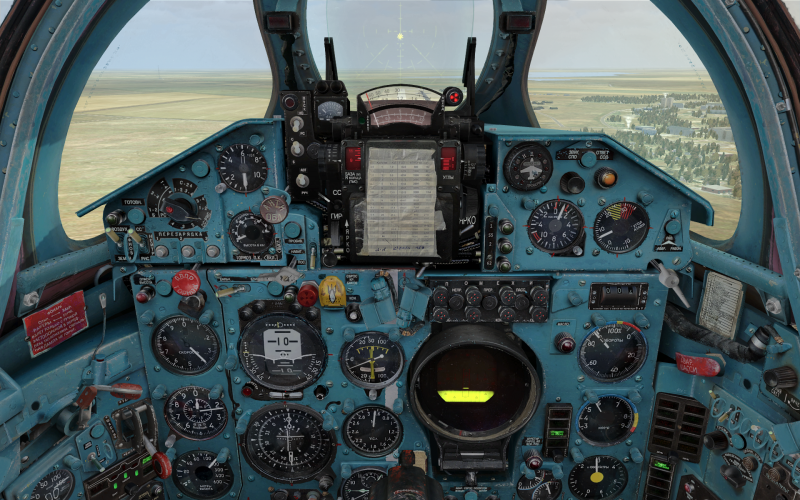 During flight, needles on the steam gauges jiggle and jostle to realistic effect, even demonstrating realistic behavior during the transonic flight regime.

The lack of key information on the HUD, such as altitude and airspeed, means that the pilot will be glancing down frequently to check these all important values on the gauges, so you will quickly learn where each gauge is and how to read it at a glance. The altitude gauge with its two rows of numbers still throws me off from time to time. 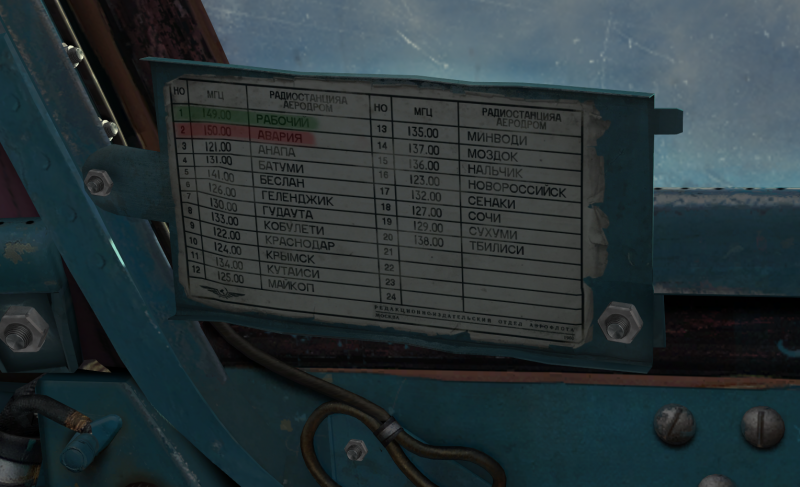 Did I mention the amazing attention to detail? It’s amazing. 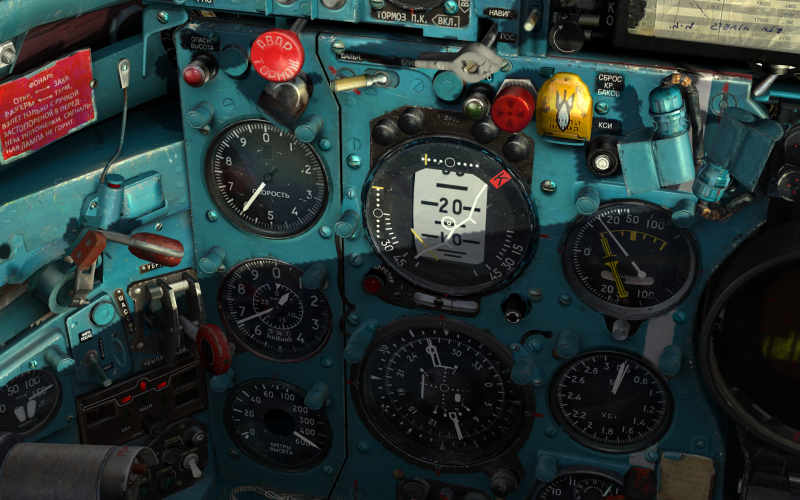 Cockpit shadows working over the turquoise (or is it cyan?) interior makes for nice contrast.

The MiG-21bis cockpit feels authentic – tight but not really cramped, steampunk but fully functional. The canopy gives you great visibility above and out the sides, but with practically no downward or rearward visibility and forward struts obstructing your forward view, I sometimes feel like I’m driving a tank. The limited view behind brings on episodes of claustrophobia, especially when I’ve lost sight of my enemy in a turning fight. And say what you will about that Russian blue on the cockpit walls, I’ve found it has quite a pleasing effect – I couldn’t imagine flying the Fishbed in any other color. 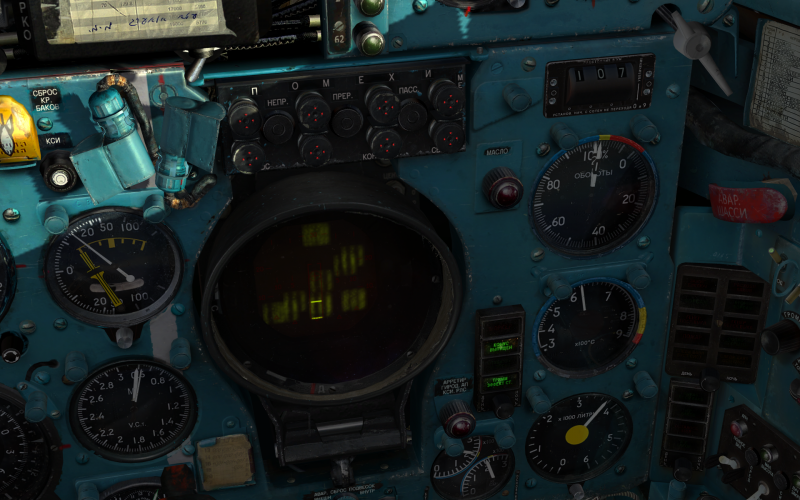 The radar display is nestled in the center of the instrument panel and has a very realistic CRT feel to it. 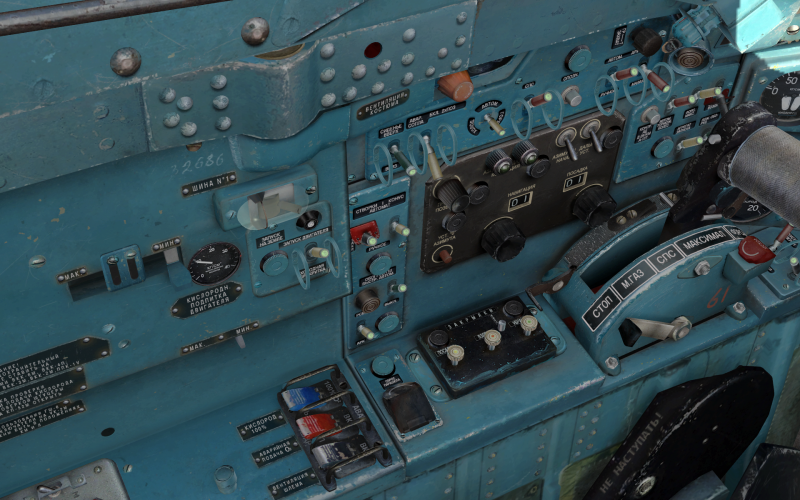 While not as clean or rigidly arranged as in some modern aircraft, the MiG-21bis cockpit controls are grouped together by function and it’s relatively quick to find the control you want, once you get the hang of the layout.

I am a fan of flying aircraft in their original language, even if that language is the strange hieroglyphics that we call Cyrillic, but an English cockpit is available for those not familiar with the script. At pre-release, the tooltips were in Cyrillic as well, which made hunting for the right switch a little more difficult than usual. In the meantime, I’m brushing up on my Cyrillic. Моё судно на воздушной подушке полно угрей! 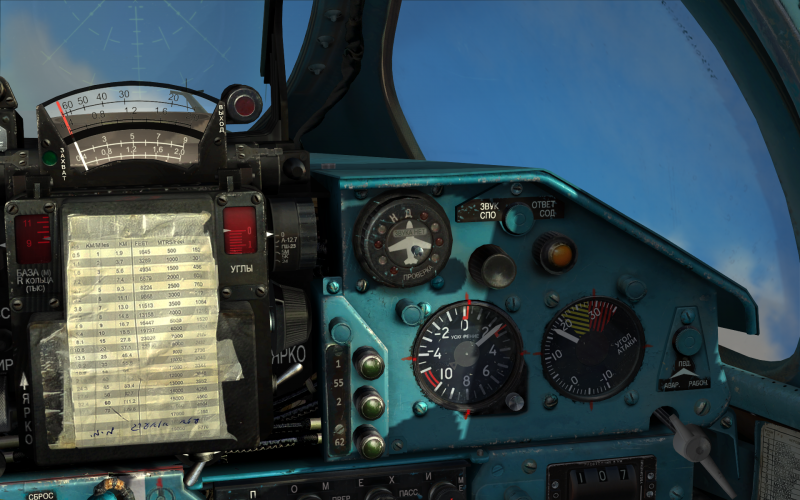 You can almost reach out and brush the dust of the top of the instrument panel. 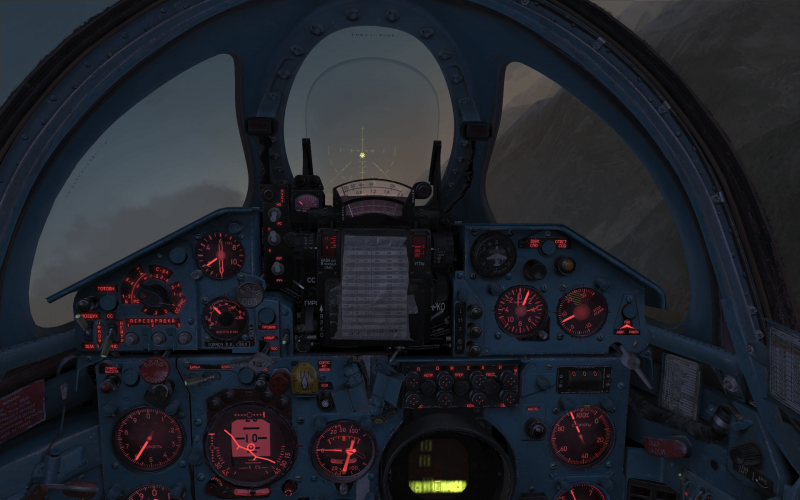 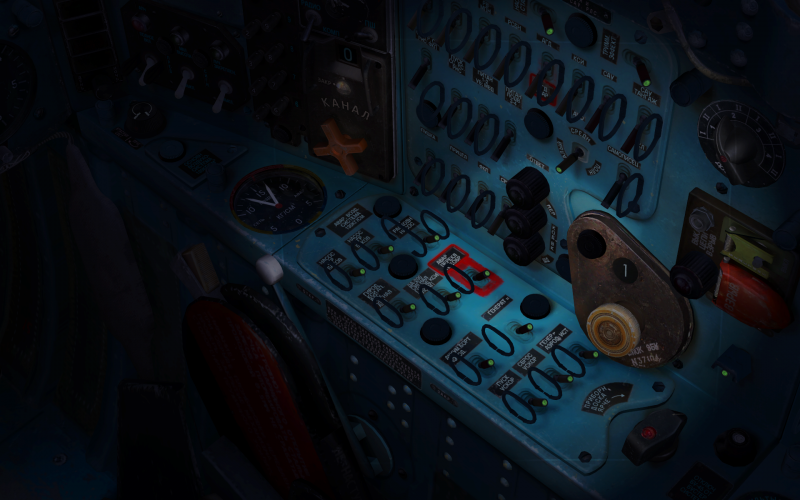 For a cold start in the dark you can pull out your flashlight (aka “pilot torch”) to find the right switches.

Cockpit icing and de-icing are expected to be functioning in the release version which should further increase the level of immersion.

DCS: MiG-21bis makes good use of the DCS World kneeboard feature by including sheets with all the radio channels, ARC sector/beacon numbers, and navigation radio channels that are easily accessible through a series of keyboard shortcuts. No more flipping through those reference cards you printed out for your real kneeboard. Unless you’re into that sort of thing.

An interesting note – some of the key combinations in DCS: MiG-21bis differ from the convention used in other modules. The refueling/rearming window is the period key (“.”) instead of Lalt+’, canopy close is the familiar Rctrl+C but Ralt+Rctrl+C opens the canopy while Lalt+C jettisons it, and I am still unable to find the keyboard command for the controls indicator. While these aren’t show-stopper items, I predict some confusion as folks get used to the change in convention. If maintaining the convention is important to you, check the keyboard bindings before you go up.