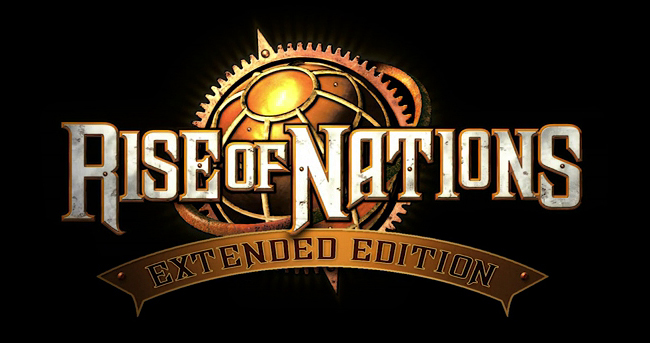 Hello dear readers! I am a new writer here at SimHQ and you are likely expecting a very simple, journalistic article as my first foray into writing on this site. Sadly, that is not what you are about to get. You are about to get a sales pitch, (an informative and honest one though) but you should read this all the way through anyways. I understand that Rise of Nations is not a traditional strategy-sim in the same vein of games like Europa Universalis but it is worth your time to say the least. My friends constantly chide me as a drifter in the video game world. I can’t count on one hand the number of games that I have completed, or played for more than a few weeks. I float from game to game, reveling in the initial experience, then move on before really digging into the juicy part of the game. There are too many experiences out there for my short attention span to stick to one or two titles for long periods of time. Rise of Nations changed all of that. It is the one game that I have played since launch, and still have installed on my computer. In general, it is the first thing I install on a new hard drive or a new computer and it never leaves its comfortable spot on my desktop.

Long winded introductions out of the way, let me tell you about this gem that time almost forgot. Rise of Nations launched May 20th of 2003. I was working at GameStop at the time and my store manager and I decided to buy it. It looked good enough — we enjoyed strategy titles — but we knew very little about it. That night, we played it for an hour or so, then another hour, then we looked at the clock and realized that the store was opening in just a few hours. For the better part of the next few years, this was 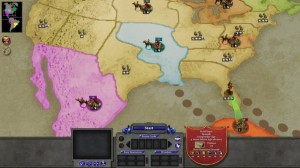 our go to game. This is what we did instead of hitting bars, or clubs, or seeing the outside world after work. We talked about it at the shop, we talked about it on the phone, we talked about it to people that came into the store. We both like to joke that we kept Big Huge Games (the developer of the game) in business based on the number of units we moved just from our store. Fast forward about a year, April 28th of 2004 to be exact, and the expansion Rise of Nations: Thrones and Patriots released. We were like kids on Christmas morning, and we had no real idea what was coming in the expansion. The important part was that the “stuff” was more, and who doesn’t love more “stuff”. We installed it that night, and again, almost caused a major incident by forgetting to open the store the next day. After all, when you are overrunning camels in your T-80 tanks, there isn’t much time for other business.

Before I break down how the game plays, and why it is such a shining example of what a RTS can be, know that this article is being written because the Rise of Nations: Extended Edition launches this month on Steam (June 2014). I am not a representative of the developers or publishers, simply a fan trying to spread the good word. I will write much more here, this is simply my debut article.

The basic focus in RoN is territory control. Think Civilization borders, in real time. You can build a number of structures that help expand your borders, and each town that you erect has an area of influence. This allows you to build cities not connected to your nation (depending on your choice of nation), all over the map, and control sections before your opponents can. Each nation has a set of unique units and advantages. Some gain huge advantages early in the game, others find power in the late game. Russia, for example, lets you build spies (more on that in a moment) cheaper and earlier, and gives you free attrition damage from the start of the game. Attrition damage, as the name suggests, is damage any unit takes when not properly supported on a conquest. Units, nations and wonders can negate the damage, but it is a major part of the strategy of the game. Borders are constantly shifting, and territory control is the main concern in the early parts of the game. It allows you to harvest resources, or deny l 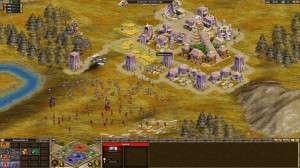 arge resource areas, all depending on your strategy and your nations needs.

There is a careful balancing act going on in every single real time skirmish. My friend, the one that bought the game on day one with me, often curses my existence because he is a macro-manager and I am a micro-manager in battle. He will select his entire force, send them at my town, then go back to building in his cities, preparing for the next attack. I send in a much smaller group, take out supply wagons, then run and hide. This gives me the ability to garrison units, do damage from the protection of my buildings, and survive until attrition wipes him out. He often tries to build a wonder that negates attrition, but I will race him to build it first. Strategy abounds!

The course of a game is customizable but the default options start you in the ancient era and ends (if you aren’t playing some jerk like me) in the modern age. Upon researching every tech upgrade at your library, you have four additional options, all game changers, to research. Instant assimilation timers when you take a town, instantly built troops, and a complete view of the map are the three most popular. The game, much like Age of Mythology doesn’t force all players to advance at the same time; instead you move to the next age at your own speed. In one game, my buddy came over a hill to take one of my (seemingly) vulnerable towns, his troops triumphantly riding on camels, sure of an inevitable victory. Just as the battle started, I jumped to the next age (now two ages ahead of him) and overran his army with a force of tanks that numbered his camels one to one. You see, he spent his resources on building a large army, while I focused on technology, research and territory. We still joke about the battle to this day. 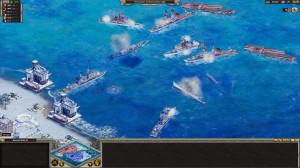 That is what makes RoN so special. Those memorable moments that can happen, all because so many different strategies are available. Scouts and spies play a big part of the game as well. Scouts, early on, simply map out the battlefield. Later ages give them more of a commando role, sniping key units or setting off bombs to deal heavy damage to structures. Spies (my favorite unit in the game) are invisible to all but a few units in later ages. They are generally expensive, but can infiltrate buildings (giving constant vision without fog), assassinate other spies, and (most importantly) bribe troops to fight for your side. Once a troop is bought, the color changes, so there is no confusion on who owns the unit now.

As another example of the depth of strategy this game brings to the table, I will again, begrudgingly, toot my own horn. One of the players in our nightly group was frustrated with my constant aircraft carrier victories. Every night, I would race to the monster unit, and just let the fighters bomb his cities into oblivion. A few ground troops kept him honest, and my fighters safe enough to not break the bank. Anyways, I told him one night I would not build any of the main military structures (barracks, auto plants and the like), but would still crush him. He laughed, said I couldn’t win through wonder or territory victories — there are three victory conditions, wonder points, territory control, and decimation — because I would not be able to defend my borders. I chose Russia, quickly built a fortress and pumped out about 15 spies. Those 15 spies, bless them, are all heroes. They stood outside of each of his unit producing structures and bribed every unit he built. As I bribed a knight, it would turn and start pounding away at the same building it had just emerged from. He would build more. I would continue to bribe the new troops. By the time his city was destroyed (and probably 50 spies later) I overtook the rest of the players with his army. Other victories, some in four or five player games, came from the least expected places. One of the regulars in our playgroup destroyed us when she built wonders the entire time as we fought each other. She simply sat back, defended her nation, and let us be cavemen. Once she had her wonder victory timer flashing on our screen, we all turned to burn her nation to the ground, but it was too late, we had weakened ourselves over the course of the game. In a team game, my friend and I built very few units and simply rushed cities along the sides of the map. By the third age, we controlled the 70% of the map that we needed for a territory victory.

Most games are a gentle game of tug and war. A little firefight here, a sword fight there, all done to test the waters and try to throw off your opponents rhythm. Late game is where things go crazy. Bombers, fighters, stealth bombers, tanks, artillery, flamethrowers, marines, rocket launcher equipped infantry, subs, aircraft carriers, snipers, generals and spies are all at work, trying to overcome the other nations defenses. While it may sound like a great deal to manage on paper, the design, UI and flow of the game makes it second nature. You are never stumbling around to figure out how to move forward in the game, you simply set out a strategy and adapt on the fly. 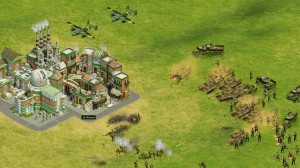 There is even more to talk about in the game, (single player is a mix of Risk and RTS) but for now I will leave you with this small, albeit long written, taste of what Rise of Nations has to offer. I have played it frequently for over a decade, and with the relaunch, Steam supported online play, achievements, Steam trading cards (a few cents in your pocket) and Steam Workshop, what is arguably the greatest, and most overshadowed RTS has a chance to live on again. The graphics hold up today, and with the touches being added to this new edition, I would imagine it will be easy enough on the eyes to take up weeks, months, or years of your life. With luck, I will face off against, or beside many of you online once it launches this month. Feel free to comment your questions, and I will answer the best I can. I look forward to getting to know all of you and hope my first little article on the site kept you entertained.