The views are from the cockpit, to the sides, outside, flyby and fixed ground views. The cockpit is rendered in 3D except for the instruments which are 2D and follow your view angle. Vital information about the flight, such as speed, altitude, heading and power is displayed as numbers in the lower left corner. A bit unrealistic, I know, but a compromise due to the fact that you would have more sensory input when flying the real thing. You just can’t feel the wind on your face when sitting in front of a PC monitor, If you see what I mean. 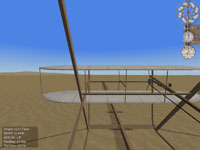 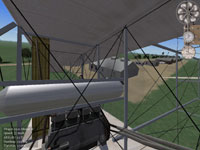 The graphics in “First Flight” are very nice! They are not, by any means, industry leading, but they do the job! Ground detail is good enough to give a good sense of speed over the terrain which is essential for landings. 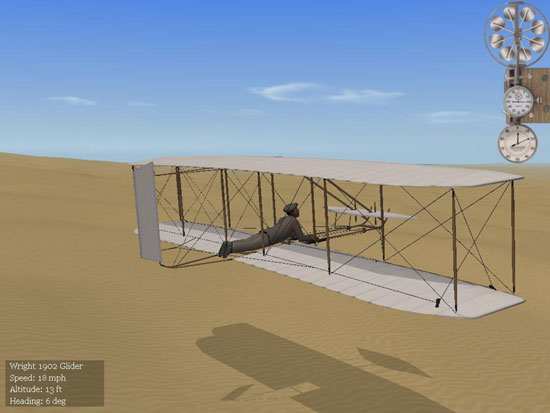 Nothing very special here. Engine sounds, wing buffeting rumble sounds and wind. An occasional seagull is heard, but not seen.

The feeling of flight is most definitely there! Flying these old crates was, and is, challenging. Just read about the centennial flyers on the web (follow links below) to see what I’m talking about.

“First Flight” captures the thrill of early aviation. Being able to take off in the 1903 Flyer is a challenging task! To succeed with this task in real life must have been awesome! To succeed in the simulator may not be as gratifying, but is never the less very awarding.

$50 is pricey for a niche flight simulator like this. To the aviation enthusiast it is a collectors item and as such isn’t more than what we normally would pay for other aviation articles.

For the Simulation enthusiast $50 represent the normal price for a flight simulator these days. Granted we normally would expect a little bit more than 3 aircraft and 4 locations. But it is “the” flight simulator for the reenactment of the first powered flight on our PC:s. And it’s, as far as I know, bug free…

I for one, will use this simulator on the 17th of December, to honor the legacy of two of aviation’s greatest pioneers. I would’ve wanted to go to Kitty Hawk to watch the re-enactment of the flight for real. But going virtually will have to do… 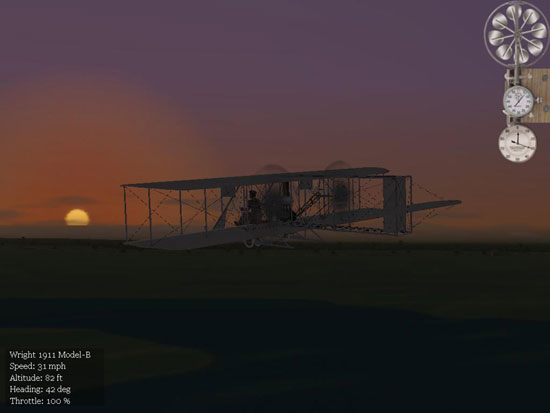