There Is No Up Or Down

This was the hardest concept for me to grasp:

There is no maneuver that can be done horizontally
that can’t be done vertically, and vice versa.*

The horizontal turn and the loop are really the same maneuver; the only difference is where energy is traded off in each. Vertical scissors and horizontal scissors are the same thing. I used to think the hammerhead was an exception, but it’s not. Pull the nose up too much in a turn and one will produce an angle-of-attack stall (regardless of speed), but without the advantage of being able to trade off the potential energy of climbing the plane tends to depart controlled flight and spin.

Let’s take one of my favorite maneuvers, the Split-S: 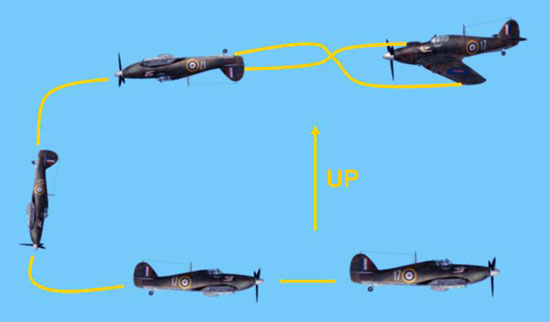 Performing it is easy, as from level flight one just inverts the aircraft, pulls the stick back, and when level to the horizon, stops pulling back on the stick. The advantages are that one does a U-turn in the sky while converting potential energy (altitude) to kinetic energy (airspeed).

One can also do this maneuver two other ways. One could pull the stick up, wait until the plane is parallel to the ground, and roll the plane from the inverted position at the top, trading kinetic energy for potential energy — a half loop.

Or one can do the invert-and-pull-back while the plane isn’t parallel to the ground. Half roll and pull back on the stick. This is the basic maneuver of the scissors — but with another half roll on the end in the opposite direction.

Why call the same series of control inputs that result in the same maneuver different things? Because it’s handy. Half-loop tells one that the direction was up, Split-S down, and scissor (usually) horizontal. When scissors are done vertically, they’re called “Vertical Scissors” simply to let folks understand the aspect of the aircraft to the ground.

There’s a neat little movie I made of a great scissor fight between myself and our resident Real Life Pilot, SpotC, that has both horizontal and vertical scissors:

It’s a big 43MB or so, .wmv format, zipped. It wasn’t made for this article; I make little movies to entertain myself when funny things happen.

For those who have the IL-2: Forgotten Battles series, the .ntrk file that the movie was made from:

* The exceptions are, of course, take offs and landings.