by Joe Keefe
commentary by “vertical”

If you’ve ever wanted to operate the Space Shuttle, then Exciting Simulations’ Space Shuttle Mission 2007 is your sim. Note that I didn’t say fly the Space Shuttle, because in this sim you do so much more than that. The only time you truly fly the Shuttle is when you land it. Sometimes you maneuver it while it is in orbit, and often the computers fly it for you. Most of the time, you operate the Shuttle — press buttons, flick switches, follow checklists… all the while with the Earth sliding past outside your window. Sometimes you even go outside on an EVA (extra-vehicular activity, or “spacewalk”). It looks neat, the audio is immersive, and it’s fun. On this review I’m assisted by long-time Space Shuttle Mission and SimHQ member “vertical”, a NASA enthusiast. 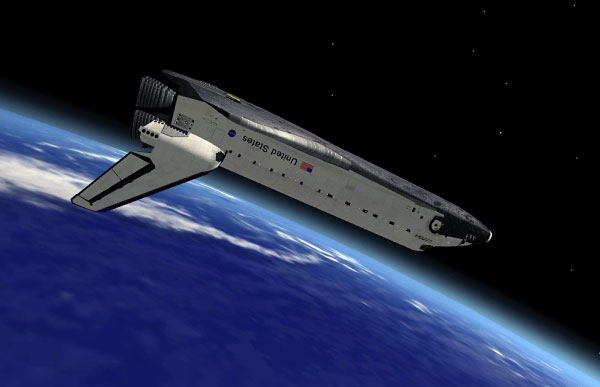 For a concise description of Space Shuttle Mission 2007 (SSM2007), I defer to the language presented in the Quick Start Manual:

SSM2007™ simulator has been developed by a group of space exploration enthusiasts with the purpose of bringing the Space Shuttle program within the reach of those who have dreamt of flying the Shuttle, watching the Earth from above and performing the various tasks real Space Shuttle Astronauts have been performing in space for the last 25 years.

During these phases, the Astronaut (you) performs various tasks as dictated by the technical and operational aspects of the mission. The tasks require an active involvement by interacting with the Shuttle interface — buttons, knobs, joystick, computers and communications.

Some of the more demanding missions require the Astronaut to exit the Space Shuttle and perform Extravehicular Activities (EVA). That means that you have to don your (virtual) Astronaut Helmet and Spacesuit and use the Manned Maneuvering Unit (MMU) to spacewalk in and around the Space Shuttle, the Hubble and the ISS.

Yes, being an Astronaut is a tough job. Real Space Shuttle Astronauts perform scientific experiments (not covered in this simulator of course) and also act as construction and maintenance workers fixing and improving satellites and building the biggest man-made structure in Space to date — the International Space Station (ISS).

SSM2007™ comes with a basic set of some of the most exciting Space Shuttle historical missions. Exciting Simulations™ plans to release additional free missions with the intention of eventually covering all historical Space Shuttle missions.

In fact, some of these missions have already been released. There are 21 missions included in the latest version of SSM2007.