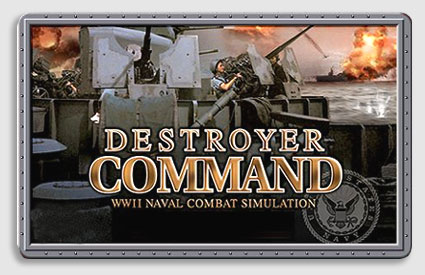 I recently bought Destroyer Command (DC) and I must admit I find it addicting. Having once served as a Surface Warfare Officer (SWO) in the US Navy, it is very interesting to compare how one operated a real warship as opposed to operating a virtual destroyer.

This is by no means a complete review. I’ve only had the game for two weeks. From the number of suggestions I have for improvement, one may think I am really flame spraying the game. Not so! I really like DC and I highly recommend it to anyone with even the slightest interest in naval surface ship operations. It’s just that, like each edition of Flight Simulator, it can always be made better.

My system is quite antiquated, but DC seems to perform very well on it. My system (please don’t laugh… 🙂

OK, here are my comments. In some cases I indicate in italics the questions a naval officer is likely to ask.

This game is something like a flight simulator for a multi-crew aircraft. The player can assume the role of Commanding Officer (CO) or a subordinate crew member. This is a very good architecture as it allows the player to experience surface ship operations from the standpoint of various crew members. Some of the subordinate roles are a little unfocussed as to just which level of responsibility the sim is taking the players. However, in a confused night action in the Solomons, the players will soon learn why we do not have one man ships. To fight, survive and win, the player must take on the CO’s role and let the (virtual) crew do their jobs. In order to take full advantage of the subordinate stations available, the game needs to allow team play on the same ship — I don’t think the game can do this.

Overall very well done, but there are a few commands left out (such as a description of X Target Lock). One needs to read the ReadMe file. There are also a few things that grate on me, such as calling the ship a boat.

The training missions are quite useful to get the hang of the game. There are several historical missions, which can be extremely challenging. Unfortunately the “Custom” mission generator is really a “Random” mission generator. The player can only select general guidelines for the mission, the class of destroyer he’s on (not the individual ship) and which ocean he’s in. The mission builder then sets the player on a randomly selected destroyer in a random portion of the selected ocean. This game really needs a much more powerful mission builder!

OK, I admit it, I opened every file I could with a text editor as well as reading up from other sources how to make any ship player controllable. With a text editor you can make just about any ship in the data base player controllable, and that means literally hundreds of ships. In addition, you can script your own scenarios (at your own risk). This game has enormous potential under the hood. If a full up mission builder will not be forthcoming, then I respectfully request Ultimation to provide us with guidelines as to how to script our own scenarios.

The worst complaint I have with DC is that I can not easily and precisely order the ship’s course and speed the way I actually can aboard a real vessel.