The G940 comes nicely packaged in a compact box with three main components: the stick, throttle, and rudder pedals. Both the throttle and rudder pedals have cables that plug into the back of the stick, from which a single USB cable is then plugged into your computer. That is a nice feature since my previous setup required two USB connections (one for the HOTAS, one for the separate CH rudder pedals). Also included is a small power transformer that also plugs into the back of the stick, a software installation CD, and a small setup instruction booklet (it’s all pictorials 20mm… even you can manage it!). 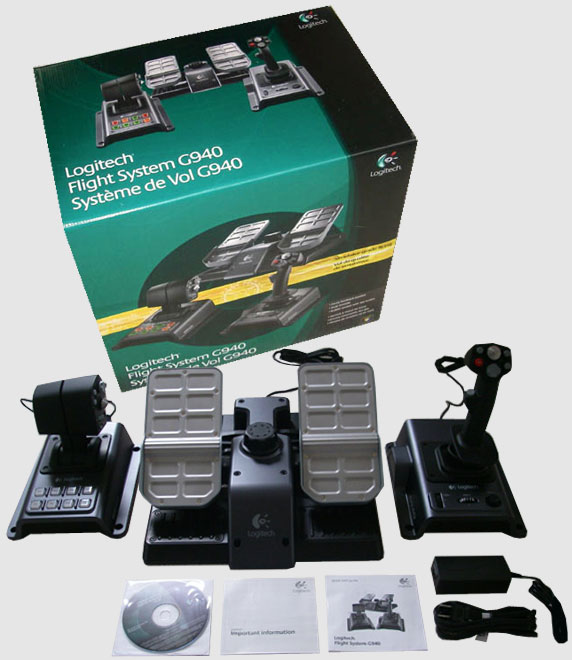 Installation is quick and simple. I did not attempt to use the stick with a Vista based system but the box indicates that both Windows XP and Vista are supported. The software on the CD has already been superseded by a new version, so Logitech is already in full-on support mode. The HOTAS features are programmed via the intuitive Logitech Profiler software that uses the standard graphical representation of the hardware to program the buttons, hats, and axis.

Building your own profile to custom suit your particular style is the best way to go. The software shipped with only one pre-made profile (for Microsoft FSX) and I did not find it particularly well suited to the way I prefer my controls to be setup. I’d expect as more G940s hit the market we’ll see an explosion of custom profiles for all kinds of games. The profiler software hints at the massive functionality the G940 allows with a 3-mode switch and an additional shifted-state switch under the stick. The 3-mode switch is nice for allowing the controller to be configurable for different phases of flight (navigation, air-to-air, air-to-ground).

Should you use the Logitech GUI or the in-game GUI to assign functions? It depends on the user really. In X-Plane and FSX I find it easier to just go into the in-game settings and wiggle the axis or press the button to assign functions, but you could just keep the default settings and map the functions to the default keys using the profiler software. It’s a situation of six or half a dozen..the results are the same. One advantage to doing mapping with the profiler would be for more advanced setups for things like setting bands for the trimmers and doing multiple key press macro recordings that allow you to map multiple keystrokes to a single press of the button.