“Let’s see,” he pondered a minute, looking at where I was standing, and then moved me an inch over. “Right there.” Goodlett and Gentile laughed. “Just stay behind the leading edge, Chuck.” Burke offered. I took position near the tail of the Warhawk and began snapping pictures while Scott made last-minute checks of the audio recording equipment and the microphone and camera placements. Burke got into his flight suit, carefully made a preflight walkaround of the aircraft, and clambered into the warbird’s tiny front office. 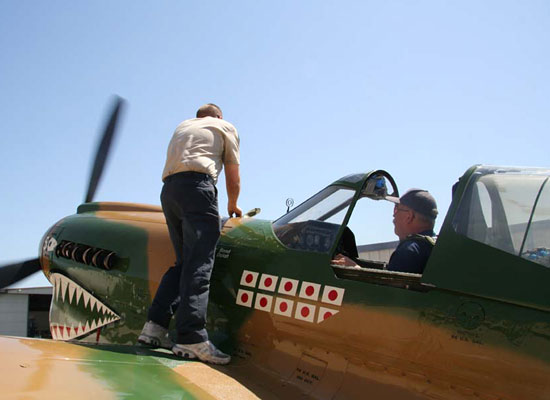 The Allison engine almost immediately caught, a testament to the maintenance it got. Goodlett was on the wing walkway, checking the coolant as Burke let the engine idle. I was still standing behind the airplane, noticing the crowd gathering from some of the other aviation firms’ buildings. It didn’t matter what was going on, when you have the chance to see something like this, you take it.

I was nearly blown over when Mike advanced the throttle and then killed the engine. “I was not ready for that, Mike!” I shouted, my earplugs still in my ears. The prop wash and the roar of the Allison were awe-inspiring, thundering even through the ear protection, drowning out any chance of me calling for help had I been blown across the tarmac. 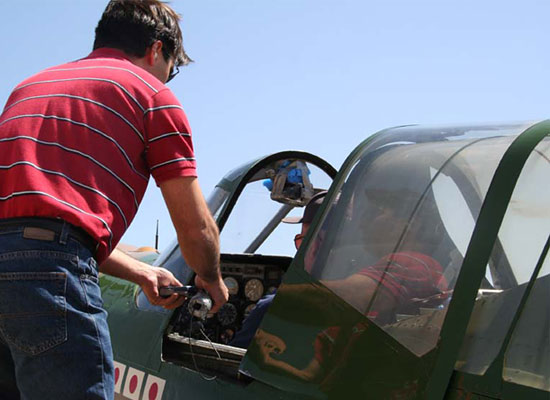 Goodlett chuckled, laugh lines creasing his tanned face behind his Oakleys, “That’s nothing, man. When you’re at full takeoff, this thing’ll blow your butt right through that RV parked behind you,” he pointed at the museum’s motor coach in the Cavanaugh’s lot.

I asked Scott how the audio was. “Some of the initial audio was not good,” he grimaced, “but we are recording the entire 45 minute flight which will give us plenty of source to work with.”

“What about the cameras?”

“Let’s hope he keeps a shoulder down.”