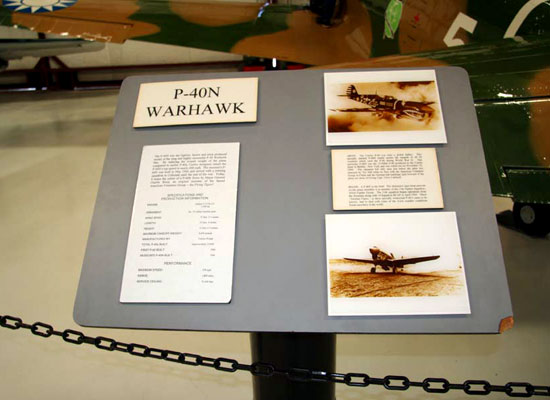 This particular Warhawk is an N-model that has been repainted to look like the B-model that the Tigers were originally equipped with. The B-model didn’t even ship with the optical sights that the RAF ‘Hawks had, AVG aircrews had to fashion their own sights for the guns. The fuselage door to a stowage compartment bears the autograph of Gen. Charles Bond USAF (Ret.), one of the last surviving members of the AVG, and a resident of Dallas, Texas.

One of the first impressions you get of the Warhawk is that it’s tiny. Seriously. This was a small cockpit. How anyone bailed out of these things without getting a parachute strap hung on something is a mystery to me. I’m not a big guy and it was a cozy fit.

We’d been using foam cores and duct tape to mount the cameras. Gentile wanted two shots. One of instrument panel over the shoulder of the pilot and one directly through the front windscreen, right down the nose of the bird. We’d tried several shots, several angles and at least three camera placements from over the left and right shoulder, and every time, we’d been foiled by a errant shoulder obscuring the crucial view of the instrument panel.

Scott had a complete flight plan laid out for Mike, including a lot of familiar maneuvers used in combat as well as configurations for take off and landing, dirty and cleaned-up flight. The maneuvers would be performed in relatively empty airspace somewhere over Sulphur Springs, north and east of Dallas. The view of the panel was to confirm the instrument readout of what the pilot was doing and to make sure that what was in the sim matched what was really happening in an actual P-40. Finally, we’d found a configuration over the right shoulder that we were satisfied with, which was good, because time was running short.

“There’s still one thing that could throw a wrench in this.” Scott remarked after using me for a test dummy for a final check of the camera angle.

“Mike’s a hell of a lot bigger than you.”