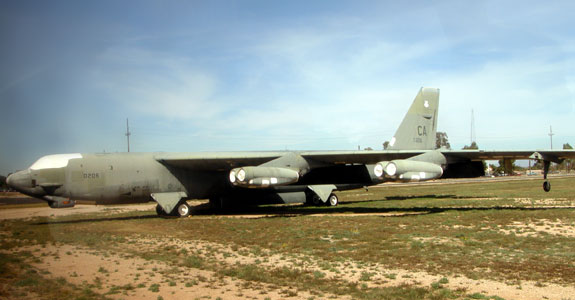 The bus passes a lone B-52 G. Beginning their operational service in 1954, Boeing now estimates that the airframes of these aircraft will last past the year 2040, and it is very possible they will remain in service nearly 100 years. Already the sons of B-52 pilots have the flown the same aircraft as their fathers. It is conceivable that their sons will be Buff pilots as well.

I heard a story about a B1-B Lancer bomber crew who had flown their aircraft to Davis Monthan Air Force base for the last time, because it was being retired. A reserved spot in the Boneyard. As they turned to walk away from the aircraft for the last time, emotion got the better of them and there were no dry eyes. “That’s a beautiful aircraft.” they were heard to say. 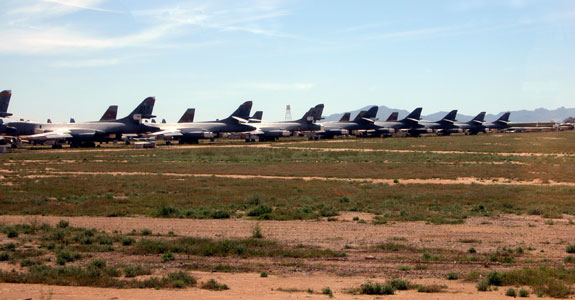 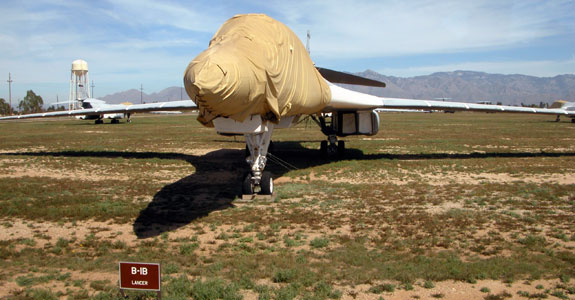 I know I am not alone in this passion. I recently spent some time talking with men who flew B-24 Liberator bombers, B-17 Flying Fortress bombers, and B-29 Super Fortress bombers, and it was clear how they felt personally about the aircraft they flew into combat as young men. One lamented the fact that there was currently only one operational B-24 in the entire world. Witness the extraordinary attempts at recovery of WW II era fighters and bombers. Thousands were mass produced for the war effort, but now only a handful remain.

I have seen documentaries on some of the efforts. People have invested their time, their fortunes, and their lives, in order to recover machines made of aluminum, rubber, steel, and glass. In 1992, a recovery team went to Greenland and was able to extract an aircraft from the “Lost Squadron”, a P-38 Lightning, named “Glacier Gal” from beneath a covering of almost 300 feet of ice. In 1993, another team attempted the recovery of a B-29 bomber, the “Kee Bird” from a frozen lake in the northwest portion of Greenland, actually above the artic circle. Unfortunately, one man died during the recovery effort, and as they were attempting to fly the aircraft out, an auxiliary power generator in the rear of the aircraft broke loose and created a fire which destroyed the great bomber just moments away from what could have been her final flight home. A neighbor of mine was a member of that team.

Still, I am not sure why I feel as I do. Perhaps it’s because I have “flown” some of these aircraft on a personal computer with flight simulators. Today’s computer flight simulations are of a very high fidelity and with amazing graphics. Some have been compared favorably with military simulators. I have performed the engine startup sequence in an F-16, and flown carrier landings, or “traps”, in an F/A-18 Hornet and hit the “three wire”. I instantly recognize the cockpits of F-15 Eagles, A-10 Thunderbolt II’s, F-4 Phantoms, A-6 Intruders, F-14 Tomcats and more. I have spent hours going through complicated radar, defensive, and weapons systems routines. The missions can be quite complicated and demanding, but once completed, you definitely feel a sense of accomplishment. And maybe a sense of attachment to the simulated aircraft that got you there and back.

“Boneyard. That’s what this place used to be called.” The voice of Larry, our tour guide for the one hour and ten minute bus ride through AMARC. “But the Air Force prefers the acronym AMARC, for Aerospace Maintenance And Regeneration Center. This is not just a place where aircraft go to be chopped up into pieces. Virtually all the aircraft here flew in on their power and over twenty percent will be refitted and will fly again. Some will be sold to other countries, some will go the Mojave range and be used as drones.”

I know he’s right and yet…

Although I have lived in Tucson much of my life, I hadn’t learned much about the Boneyard. As a boy I spent many a morning on a dirt road with a barbed wire fence alongside it, searching for aircraft parts and hoping to find something interesting to take home. My intentions, if I recall, were to build my own jet aircraft cockpit at home. Gauges and switches were especially prized. I dreamed of finding a joystick by the side of that road, but never did. When I was ten I bought an old military surplus helmet and oxygen mask and swaggered around the house pretending to be a fighter ace returning from a harrowing combat mission.

Education is a wonderful thing, even for someone of my advanced age, and taking the AMARC tour was worthwhile. Actually seeing what is happening, the process and procedures, and having it explained opened my eyes considerably. Plus, I did some research on my own. What I found was that far from being a “Boneyard”, AMARC is a joint-use refitting and reclamation facility with all types of aircraft from all branches of the military. Heavy bombers, tactical bombers, fighters, fighter/bombers, refueling tankers, transports, search and rescue, electronic surveillance/command and control, electronic warfare, anti-submarine, helicopters, they’re all here. 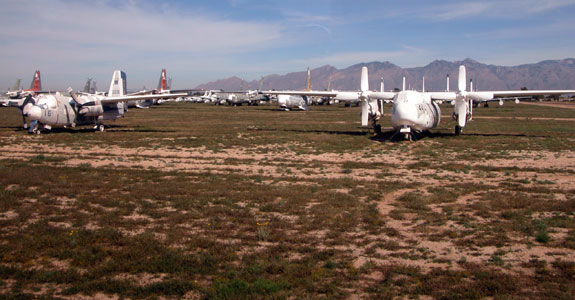 Touring the base and seeing aircraft in various stages of dismantling does lends credence to the “Boneyard” description at first glance. There are portions that look like an aircraft junkyard with parts littered around, airframes sitting in wooden cradles with the tail assemblies and wings removed. But it actually is a very effective and efficient process, with the goal in mind of maximizing the value of every single component part on each aircraft. While it may look haphazard to the untrained eye, everything here is done in a very deliberate and controlled manner. Parts are removed as needed while protecting the rest of the aircraft for future use until literally there is nothing left but scrap.