I like to think of this as the “where is everyone?” mode of play in Rise of Flight.

Sunday, late afternoon Central USA time, and there are seven players in the air. Seven. And this is a simulation that was touted by the development team as having an online focus!

First off, there were probably more than seven in the servers, as it only shows those actively flying in a mission and not those in the server waiting for the next mission as observers; but not many more than that. Second, the server list is notoriously slow for updating player numbers. 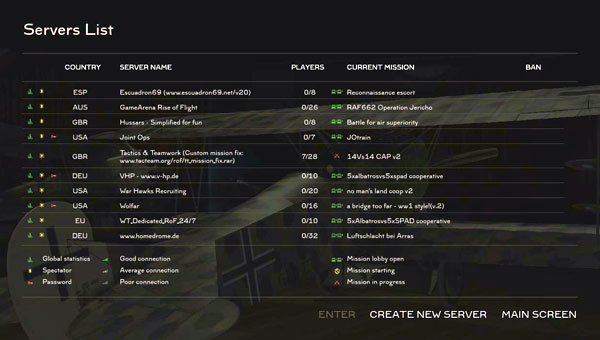 However, there are problems in Rise of Flight multiplayer land, and they are threefold.

First, every mission is a cooperative mission, meaning that one can’t join into an ongoing session and fly. There isn’t a “dogfight” mode of play where one can select an active aerodrome, pick an available plane type, and join in the fun. If one cracks up on take-off, there’s no way to quickly grab another plane and get back in the action. There is far more waiting around for the next mission to start for a chance to fly than there is actually flying. The reason kids don’t say “let’s play ‘airport!’” to each other is that hanging around until one gets into an airplane just isn’t fun.

The missions available for hosts are of the “instant action” type, with aerodromes either very close together or one or the other side starting in the air within a very short distance of each other. This is great for testing a simulation in a beta but bad for simulating WWI air combat. Until better missions start rolling out from the community its Instant Action Melee Hour.

Finally, there is no real information in the lobby screen. No player lists, no difficulty settings listing, and no real description of what’s going on. In this screenshot, the Hussar’s have been kind enough to say “simplified for fun,” which is a nice wave-off for me, but then again they may have the same notion of “simplified” that I do (engine pre-warmed).

I realize that I’ve been completely spoiled by Hyperfighter, but often enough who’s online will determine if I fly IL-2 on any given night, and which server I fly in is based on difficulty settings and aircraft choices. In RoF’s defense on the matter, DCS: Black Shark’s multiplayer GUI doesn’t have the things Hyperfighter has, either; which is one of the reasons I only fly DCS: Black Shark in multiplayer when it’s been pre-coordinated with my squadron. 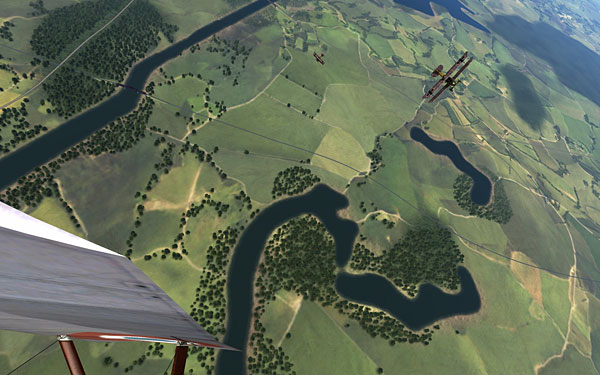 A minor gripe I have is the weird “OPPOSITE – ORDER” way of choosing which side one is going to fly for. It’s not Entente – Central Powers, as one would think, but actually “OFFENSE – DEFENSE.” So if one is attacking an aerodrome in one mission and defending it in another, one has switched sides. And, possibly, nationalities! Or not! It depends how the mission was written!

When community made missions start hitting the servers, there’s going to be yet another problem — payplanes. Right now the “stock” missions all have at least one of the four flyables that come with the simulation as a selection option, so one is able to buy the sim, log on, and fly in any server. In the near future, we should start seeing Camel versus Fokker Dr.I missions (for examples), which will both be pay-to-fly models. If one hasn’t purchased the planes, one is forced into spectator mode.

It’s a shame, really, as the net code is rock solid, and both setting up and joining servers is very easy. I have yet to see a lot of warping or other signals of lag issues. neoqb is working on the dogfight mode for an upcoming update, and with the English Mission Builder’s Guide nearing completion, we should hopefully see a lot more servers that will be attractive for multiplayer hounds like myself.

Create and delete pilots. Determine who you will fly for and when. Standard fare in this section.

Rise of Flight loves to give one awards. There are awards in the form of data plates for planes one has purchased as flyables. There are ribbons for completing the training sessions. There are awards from campaigns, and even awards for multiplayer. All, thankfully, can be selected to not show floating over the main menu GUI. If you leave them on the screen, though, one can click on them for closer inspection.

One can find out all sorts of fun facts about one’s progress both in single and multiplayer mode here, from campaign statistics to online survival-versus-kills ratios. It’s like the opposite of self-esteem building, or, possibly, a glance into that Permanent Record they said they kept at school on you. If you stink at combat flight sims as much as I do, that is.

Part and parcel to neoqb’s business model is the release of pay-to-play flyable planes. Every player will see the new planes as they are released as AI, but it will cost $7.62 USD to open up a cockpit to one of the new models. The upside is that one can cherry pick the planes they want to fly and pass up the ones they aren’t interested in; the downside I’ve already alluded to: if a mission builder makes a mission that requires pay-to-play plane, one can’t participate in them.

Personally I don’t mind the system at all. I’d much rather pay a little extra to get high fidelity models of aircraft in fewer numbers than a huge assortment that are mediocre or incorrect.

Purchasing planes is straightforward. Log into their web site, select a plane one wants to purchase, enter a credit card number, and it’s released. I did a test with the RoF sim ready to start, purchased a plane, and then fired up the sim as soon as the confirmation of sale was on my web browser. The plane was available immediately.

This is either a feature or a “bug,” depending on one’s viewpoint. Personally, I like the fact that the simulation looks to see if there is a software update and automatically downloads them. Patch / update hunting and installation is a pet peeve of mine, and while the larger downloads can mean that flying is delayed or even pushed off for another night, I’ll accept that over finding out that I can’t fly online or get a new plane that’s been released due to version incompatibility.

There isn’t one. It’s a glaring oversight, and one I hope that neoqb puts at their top of implementation features. The simulation begs for the ability for the player to go back and review what happened in the air from multiple angles in order to relive epic battles and for the movie making community to put together machina.

Load times are too long for my system. It can take up to two minutes for a mission to load, which is frustrating to the point of distraction.

This falls in the “oddness” category, as when trucks are on fire they continue to drive forward. I realize that the soldiers in World War One were tough, brave souls, but nobody continues to drive a truck that is on fire and under attack by aircraft. Likewise, they seem to be too tough.