Doug: Any interest in branching-out to other simulation genres like naval, racing, or land combat?

Cato: Actually, yes. I wouldn’t mind trying to, say, make a movie using ArmA 2. When it comes to PC games — while they may not be “sims” — I love action and arcade games as well. I played all the Battlefield games, Aliens vs Predator, DOOM 3, Far Cry 2, Crysis, etc., etc. I also enjoy racing sims though I hardly play any currently.

Doug: What is the video project you really want to do next?

Cato: Honestly? A DCS movie with a fighter jet! But since we have no idea when we might see a fighter in the DCS series, I guess I could venture on to something I have never done before — making a movie with a story. “GGTharos” from the Eagle Dynamics forums and myself have actually been discussing making a movie using DCS: A-10C Warthog. He has the knowledge to provide the project accuracy and authenticity. Also, it helps to be more than one person when trying to make a good story. If I am going to do it, I am going to do it right!

Doug: The age old question. Is it time or money holding you back from doing even more beautiful work than you’ve already produced?

Cato: The biggest problem that I am facing, at least when I was creating “Project 10”, is that I try to make every shot unique in one way or another, and that takes time. I always think to myself “What can I do now with this scene? How can THIS scene look better?” It’s really frustrating at times as well, because the last thing I want to end up with is a movie where I think “This is a boring scene. Oh no, that could’ve been done better…” and so on. I don’t want to make a movie that looks “rushed” out the door. The key is to make shots and scenes that “stand out from the crowd” so to speak. Another thing I try to avoid is being too repetitive with scenes and shots. It wouldn’t look good if I had 3-4 shots in a row where all you see is a flyby. Variation is also quite important. 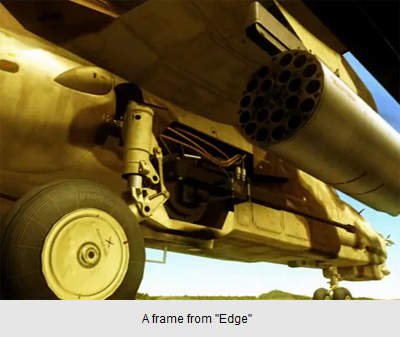 Doug: Do you record “live” or do you use the track recorder function to playback and choose camera angles?

Cato: It’s a combination of both actually. Sometimes, when it’s just the AI in the mission, I just fire up the mission and go havoc with the camera just looking for cool shots. When I am part of the mission in my plane, I fly and do what I do, and save the track, and then i go over it looking for good camera angles.

Doug: What software do you use to capture the video?

Doug: Do you shoot any “live” video to merge into your finished projects?

Cato: No, I have never filmed anything myself and used it for a project. But I have used some still images of real clouds and used them in a movie. This is really evident in the movie “Edge”.

In my “Speed 2 Final Trailer” there is also a shot where I used real clouds footage to breath more life into the sky instead of just a static still shot.

Doug: Looking at your credits at the end of the videos, the pilots you work with are listed.

Cato: Yeah, it’s the names of those who have done some scenes online for me, sent me their track file, a mission, or helped me out in one way or another. Thanks to all of them!

Doug: Do you use any “canned” audio files such as bangs, or explosions?

Cato: I have been collecting sound effects since 2003, so I have a huge library.

Doug: Do you ever have a narrator in a project?

Cato: So far, it has not been needed, but that might change of course.

Doug: Are your scenes shot with mostly your own flying, AI, then the pilots “fill in specific shots”, or do you use them exclusively?

Cato: It’s mostly me doing the flying, because i can hardly get the AI to do *exactly* what I want them to! Other times it’s a nice mix.

Doug: How are the air segments choreographed? Do you do a traditional video storyboard, a script with camera calls and angles, or do you shoot a bunch then edit it down on-the-fly?

Cato: When I begin a project, and if it’s not a story based one, I first set up the music the way I want it so I can get a feel for how the movie *might* look. And here’s the thing… up until “Project 10”, I have never used a script. For “Project 10”, I wrote down some scenes that I really wanted to do, but I ended up not getting even one-third of them done. I listened to the music multiple times and as I am doing that, I am picturing scenes in my head that would fit to the music. For the intro segments of “Project 10”, I knew that I wanted to have some sort of “take off” sequence, and to me, it really went very well together with the music. For the really hectic ending of “Project 10” when the A-10C flies through a burning wreck that has just exploded, that was something I planned. So I just created 2 tanks, destroyed it, and flew through the fire. One take, one scene. It’s pretty much the music that “decides” how the movie is built up — for me at least — and what scenes that goes with it. When I don’t have anything specific planned out, I just go “Okay, I need more action scenes here”, so I just go about some random scenes, doing some shooting and flying, and record the shots from multiple angles and pick the best shots during editing. Sometimes, this is a very time consuming process. Again in “Project 10”, when we first see the A-10C firing a Maverick missile, I wanted a shot of the plane “rolling in”, firing, and then I wanted the camera to follow the missile as it travels. So to sum up, many of the shots are planned and thought out, while others may be completely random.

Doug: Do you utilize multiplayer to coordinate the shots or do the pilots submit tracks to you?

Cato: Well, I actually wrote a small script with scenes that I wanted to do online for “Project 10”. Scenes that would have been very hard to do using the AI. Sadly, I didn’t get to do any shots online at all. Basically 99.9% of the footage I have recorded in my movies has been done offline.

How to Make Your Own Simulation Movies Page 6

How to Make Your Own Simulation Movies Page 7