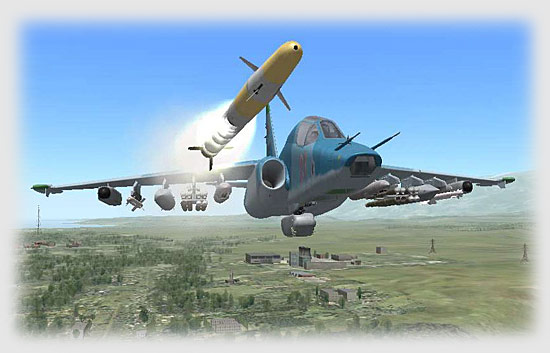 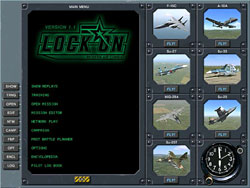 Flaming Cliffs adds the Tank Killer, the Su-25T and it is built around this aircraft. In fact, Flaming Cliffs is almost an old-fashioned study sim for the Su-25T, one that in the late 1990s we’d have paid fifty bucks for a single flyable aircraft to get our hands on it. This is the penultimate Russian air support aircraft, outdone only by the Su-25TM (the modernized version, exported as the Su-39), its tertiary development and an aircraft being looked at for subsequent add-ons to the game. Eagle has taken the opportunity to use Lock On and the community as sort of a proving ground for new technology. This gives US the chance to get enhancements to current software, and allows Eagle to see what works and what doesn’t work, in a real-world environment. They’ve put an aircraft model in the game that reaches new standards of verisimilitude in looks and in the flight experience. As I said, a couple of years ago I’d have put down fifty bucks JUST for the Su-25T! Let’s take a look at the changes.

The 3D model for the Su-25T is new and highly detailed. Check out these screenshots of the exterior model. 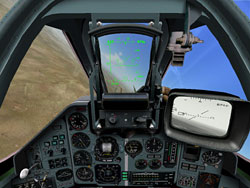 Every strut has been looked at. Loads of polygons went into this one. They’ve taken pains to recreate a photo realistic aircraft. Obscure details are here, like the Sukhogruz IR jammer, mounted in the tail, and the optics for the Shkval laser designator for optically launched weapons in the nose. This is the same system used on the MiG-27 fast mover for air to ground work, and we get to see it in action in game.

In the cockpit, the beauty continues. Eagle has carefully modeled the cockpit from the actual aircraft, in all respects save one: the radar warning gear. This is classified in Russia and documentation for it was impossible to get. The team therefore installed the SPO-15LM warning system that is ubiquitous for Russian aircraft. It is a good compromise, because modernized versions of the Su-25 produced by firms as technologically advanced as the Elbit firm in Israel retain the SPO-15 in real world applications. 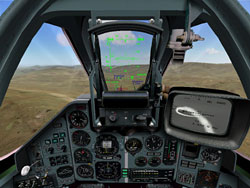 The IT-3M television monitor is present and operational in its place in the upper right-hand eyebrow panel. Turn it on, and it looks for all the world like an old black & white television, flashing for a second as it warms up and flickering on to give you a Day Television look at the world in shades of gray, and in steps up to 25 power. Its symbology is well-researched and reminds me very strongly of a Russian version of the displays we see every day on the news on American aircraft engaged in air to ground combat operations. It works very much like the TVM in the A-10, and is based on similar technology, although with the IT-3M you’re looking at the target from the aircraft camera and not from the missile itself.

With the TV, you have access to optical weapons including the Kh-29T, Russia’s larger and clumsier version of the Maverick, which makes up in brute force for its lack of finesse. All the laser weapons that the Su-25 in the original Lock On could use are here, and now, you can target them accurately from stand-off ranges. A new weapon for us fixed-wing aviators, the AT-16 “Vikhr” antitank missile, is also present. The Su-25T can carry sixteen, slung from two eight-round APU-8 launchers. The team has exhaustively researched the Vikhr, which is Russia’s answer to the American AGM-114 “Hellfire” laser-guided antitank missile. They’ve modeled things as obscure as the Vikhr’s weird seeker that causes the missile to take a wacky spiral trajectory to its target, a simming first. And they’ve looked at the launch rails that the larger missiles use, the AKU-58. In game, you can see it operate with large air-to-ground missiles. It kicks the missile off with two large feet, and the missile drops away before igniting. 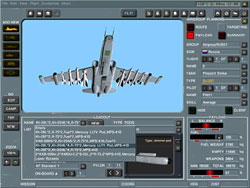 Eagle has also revamped the use of anti-radiation weapons, and given the Su-25T alone the ability to employ two of them: the Kh-58, a modern weapon analogous to the HARM, and the Kh-25MPU, an older weapon with a far more limited onboard threat library. Both of these weapons require a dedicated targeting pod to be useful. This is Fantasmagoriya, a useful emitter tracking system. It is slung under the aircraft’s belly and I have found it most interesting. Let’s talk about SEAD in FC for a minute.

Eagle has introduced some technology to the anti-SAM fight we’ve not seen since Falcon 4.0’s adaptation of the U.S. HARM Targeting System. Fantasmagoriya places a square cursor on the screen that looks just like a square version of the CCIP bomb pipper. Press “tab” and it will lock on the most intense ground emitter being received. If the threat is in the weapon’s library and you’re in range, you’ll get the “launch authorized” firing cue. If you’ve got the Kh-25MPU aboard and it doesn’t know your target-such as a ZSU-23/4 radar gun, which the Kh-25MPU doesn’t have in its library-you’ve got to think fast. 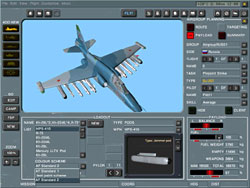 I had that happen to me and here is how I resolved it: by using a Kh-29T.

You see, you activate Fantasmagoriya by using the same key as you would use in a radar-equipped aircraft, the ‘i’ key, to turn on the radar. Which means that it can be used in conjunction with ANY weapon to show you where the offending radar IS, once it’s in your HUD field of view.

Once you have done, that, simply place your optical or laser weapon’s HUD cursor over Fantasmagoriya’s displayed HUD cursor that is pointing you to the threat, and take a look at the IT-3M to see who is causing you the heartburn. Then launch on his butt and eliminate the threat. It’s really useful even when you don’t have anti-radiation weapons!