Very recently, I was doing a quick google search to see who had linkedwww.airaceonline.com in their websites. Sadly there weren’t many links (please do so, it makes our lives a lot easier! but I digress).

So I decided to see if there were any mentions of the url within the pages themselves. Strangely enough, it took me to a page on this very site! A forum post which linked us in a discussion on Red Baron 2. This particular forum post was incredibly interesting to me, as it linked to a new entry on wikipedia which talks about the history of what I consider to be one of Air Ace’s ancestors in many ways. 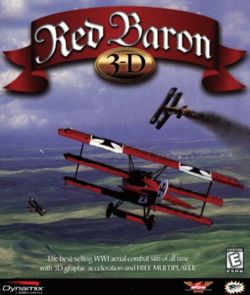 What interested me most though, as I was reading the entry on wikipedia, it really struck me how much love that people had put into “modding” this ageing old flight sim.

And it’s not just Red Baron that gets this kind of attention. It’s EAW and a few other out of date and unsupported sims too.

Which kind of brings me to the subject of this article.

The essential notion is this:

Why would you spend all of your time modding what is essentially a “dead” sim, when for a little more time and effort, you can develop (and sell) your *OWN* flight sim?

One of the things I always intended for Air Ace, which has been in my planning from day one. is to make sure that it is not a “fire and forget” development model. We aren’t just going to release it and move on. We have planned from the beginning to have it as a continuous development project. Partly because we simply dont have the resources to make it have all the features we want from day one, but also because we want to take feedback on it’s direction.

Now here’s the important part. We also wanted to make it open to user modification.

When I say “open” I mean really fundamentally open. As in you can pretty much rework the whole thing, flight model parameters, 3d models, textures, scripts, everything.

So coming back to the central point, I have always kept in my mind the notion that we can never cater to every style of gameplay, nor should we, as we have a very specific product in mind. However it has always been my intention that not only should we allow our users and players to contribute and mod the game, but further to that, we should actually allow those users and teams, to actually make their *OWN* flight sims.

So the intention is that, once we finish up the actual game we intended to make, at that point, we then make our codebase available to others in order for them to create their own flight sims.

Let me make that clear, right now, our focus is on shipping the game, but further down the line, we intend on cleaning up the code, adding some features which are likely to be generally required. Incorporate some more leading-edge technology and functionality. Then look at licensing out the codebase to other indie teams, so that they can create their own sims, with their own focus, at a price they can easily afford.

I’m hoping this will inspire some of those people who really get into keeping an old dead commercial game alive and will allow them to actually turn that love and effort into a product of their own. I know some of them are capable of doing it and I intend on making it as easy and as fun as possible. Imagine creating your own EAW successor? Or your own Red Baron 3?

Not that we are there quite yet. There are some technical and legal issues we will have to address. But our fundamental position is that we want to nurture the notion of indie developed flight sims and if it means we have to show the way, so be it.

I think it is an article on SimHQ that points out that this may be the only viable future for flight sims in general (to use a common codebase) and I think that unless Oleg decides to release the source to his new flight sim for a reasonable indie license fee, it is the only way we are going to see any new developments in this area actually make it to sale.

I hope the SimHQ readers appreciate that the cost of commercially developing flight sims is fast coming to the point where flight sims will cease to be developed. Unless we actively promote and nurture development of flight sims by indies, it is unclear whether in another 5 or 10 years time you will be able to actually find a flight sim to play.

We have some exciting new news to come on the Air Ace front within the next few weeks. I look forward to showing the game off some more, but for now I just want to show my appreciation for the author of that wikipedia article and all of the modders of those old flight sims. Hopefully some of you will join us in the indie flight sim revolution in the years to come!

Until next time, you can visit us online here at our web site.