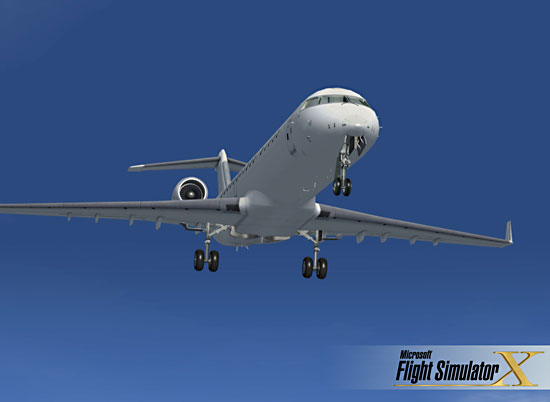 Day one will for now remain confidential. If I told you what went on, I’d have to kill you. Either that, or I’m sure Brett Shnepf would string me up by my ba… well, you know. Brett is currently Microsoft FSX Community Development Team Lead (read marketing guru extraordinaire) and his job is an important element of what Microsoft sees for the future of FS. Brett shared his multi point management style carved from Ronnie Van Zandt’s band (Lynyrd Skynyrd) philosophy. It was interesting and actually quite useable, but that’s the subject of another article! Free Bird Baby! Hal Bryan sat in with us also and lent his expertise and thoughts about what the future holds for Microsoft, ACES, and the Flight Simulator community.

I can say one thing though, and I want everyone reading this to really ponder this thought.  Microsoft is committed to full cooperation with the growing universe that has evolved around Flight Simulator. They want to expand and grow the fan base well beyond what it is today. When I say cooperation, I mean real commitment to third party free and pay ware elements. It’s a refreshing attitude and one that is in my opinion long overdue. I’ll touch a bit more on this later. For now, rest assured, I think some very good things are coming for the community in the not too distant future. Microsoft wants things to be different this time around and in my mind they mean it.

Day two was basically a recap of a lot of what we saw at E3Expo 2006. Of course, the program is a good bit farther along and it’s evident that progress is being made. It was pointed out frequently that this is still very much beta and as with any software at this stage we saw some problems. I saw nothing which concerned me and was impressed with the stability at this point. Overall it was running fairly well and appeared to have most of the features complete. Our schedule included several nice presentations covering all aspects of the sim. Much of this was old news for me as I had seen it at E3, but a good portion of the audience had not. If you head over and skim through our E3 coverage you can read about the details. 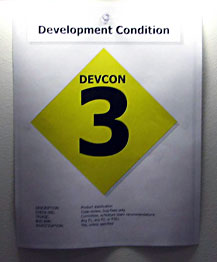 The remainder of the day was spent in several fairly informal play sessions showcasing the program in a lab environment. Overall I learned a few new facts but for the most part this was a “press” event with few new details from what went on at E3. But the “new details” were well worth the trip.

We also got a tour of the ACES Studios and it was evident that the dev team is rapidly approaching crunch time. First Beta is in the hands of testers and already many things have been addressed and worked on. The hallways were busy, folks looked enthusiastic and the overall atmosphere was very positive.

I saw an interesting sign on the wall which referenced stages of the software and program development. It was a scale based on development condition, or Devcon. The sign currently displayed “DEVCON 3” and a yellow alert. They have two more stages to go until release. All around were constant reminders that the pace has quickened and the office was alive.

I noticed a lot of model aircraft and aviation related stuff littering the cubicles. These guys really do live and breathe this stuff and it was really nice to chat with kindred aviation nuts!  During the tour it became evident to me the myriad improvements to the sim. Basically the world is going to be more detailed overall. It will be more accurate as far as cultural and geographical features go, and it will look more realistic in color and variation. It was evident how much improved the airports themselves will be. 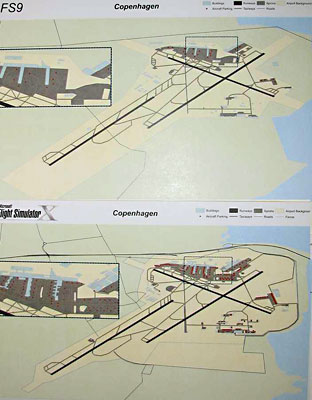 Copenhagen – in FS9 and FSX
(click image for enlargement)

Fencing, realistic looking buildings, hangars, and terminals are a nice improvement to current generic airports. Road data is much improved and things like autogen and tree count per square mile are vastly improved. The weather also is getting some decent improvements. I asked specifically about the overcast problem with FS9. Currently you just can’t get a real layer to look solid enough from above, and you see the ground right through it. I was told this will be improved but may not go away altogether with the DX9 release this holiday season. Things may change with DX10 but we will have to wait for that hardware to arrive to know for sure. I was told that there will be separate visibility layers and this will improve the situation a lot from where we are now. Weather transitions are also getting smoothed. Going from one weather system to the next should work better now with little or no abrupt visibility changes. 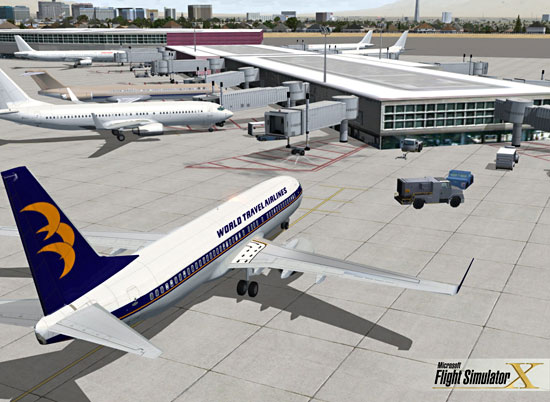 Airport detail is way up

Sky colors and textures seemed a bit more real to me also, and things like HDR lighting, bump mapping, and light bloom will enhance the visuals.

All of the things we have to pay for now will be convincingly displayed right off the DVDs. I know what your all wondering about now. How can I run this with any decent frame rate with all of this eye candy turned on? Here is my guess and I had one or two of the team members confirm this unofficially for me. If you can run FS9 now with several enhanced add-ons for roads, land class, coastlines and mesh, with high detail airports and lots of AI traffic, you should be able to run the default sim pretty well right out of the box. I guess the proof will be in the pudding and we all know the story where hardware is concerned. Flight simulators have always pushed the boundaries and likely this one won’t be much different.