These weapons are classed as ‘forward firing ordnance.’ Let’s start by recognizing that we are talking about A2G rockets…not A2G missiles! What’s the difference, you ask? Simple…a missile is guided by some system (IR, laser, radar, etc)…a rocket is unguided. It goes more or less where you point it. It’s the ‘pointing’ that is the tough part, and that is what this article is really all about.

Forward Firing Ordnance Ballistics
When we release a bomb or shoot a rocket or fire the gun, these weapons share common characteristics. They are all unguided, they freefall under the effect of gravity, and they have a release vector.

Forward firing ordnance also has a release vector with a velocity and direction. Think of the direction as the aircraft flight vector (that’s close enough for our purposes). Unlike the bomb that has the velocity of the aircraft, the rocket and gun projectile gets an additional increase in velocity when they are fired. How does this increase in release velocity change things?

By changing the ‘bomb range’ value…that’s all. The rocket and gun projectile is still affected by gravity during its time of flight…not as much as a bomb (since the bomb time of flight is so much greater), but gravity drop is still a factor. As a result, rocket and gun projectiles usually impact the ground short of the AOP, just as in the case of a bomb delivery. In fact, when looking at the ballistics of rockets and guns, it simplifies matters to think of them as ‘high speed bombs.’ This figure explains this. 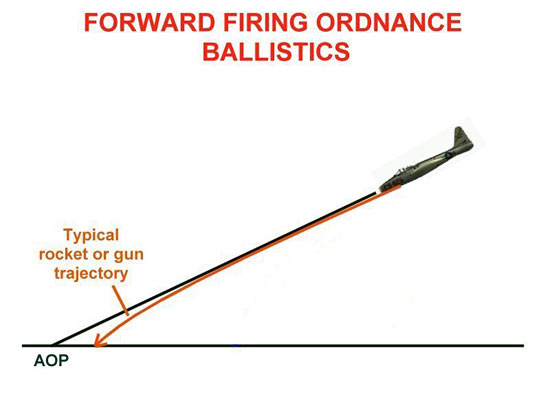 Note that the term ‘bomb range’ is universally used to depict the distance the weapons travels from release to impact. This figure is essentially the same as the figure for bombs (Figure 3). The main difference is that the target is much closer to the AOP since the rocket and gun bomb range value is greater.

Forward Firing Ordnance Sight Depression
Since the AOP is still past the target, the reticle has to be depressed much as it was for a bomb release. The only difference is that the mil value is smaller, often much smaller. The next figure combines the bomb and forward firing ordnance bomb range figures to show this. 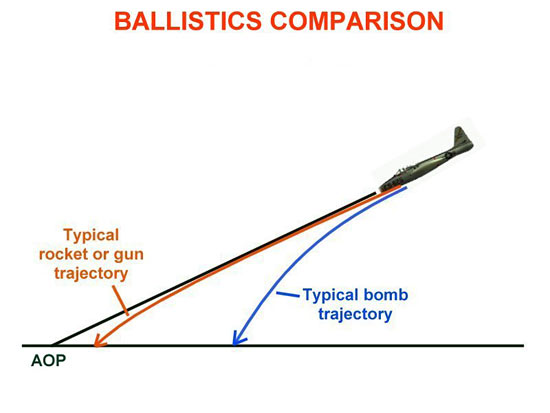 The result is a sight setting that is near the top of the HUD and is on or close to the gun line for both rockets and guns…the sight setting for rockets tending to be the further down in the HUD. Both rocket and gun projectiles tend to lose their velocity after being fired (the rocket begins to slow after the motor has burned out…the gun projectile begins to slow almost immediately). This loss of velocity has the greatest effect when the weapon is fired at longer ranges. As the projectile slows, gravity drop begins to be more evident. Because of this, the sight depression settings tend to increase. The next table shows representative sight settings for a typical free fall bomb, rocket and gun attack using the same release parameters. 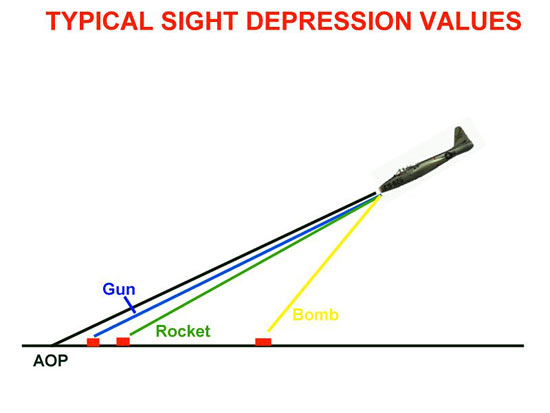 While it is not a completely correct analogy, you can think of the longer range rocket and gun sight depression settings as being similar to the increased elevation needed when shooting a rifle at a distant target.