I’ve probably been to 7 or 8 E3Expo’s over the years. This year’s event has to rank as one of the top 2 or 3 I’ve attended. Not because of any one factor, but just the overall “pulse” of the show. It clicked.

Now it’s no secret that the governing body of E3-land came forth with the proclamation that “though shall clean-up thy act”. Well guess what? It worked. When the “general” news media wants to highlight the computer game industry, they send Susie Reporter to La-La-land and E3 to see what is happening in the world of game pixels. E3 is the benchmark, rightfully so or not. So kudos to the leadership team at E3 for making the show a respectable event… again. Of course there was that one thorn about the “not” early media on Wednesday, but excepting that circus, the week moved along rather nicely, thank you. While it was still crowded as a nickel beer night, it did seem to be better than last year. And the attendees seemed more business minded. There were still some less than professional “characters”, but they were fewer. At least seemingly so.

Last year’s event was disheartening for friends of the PC. It looked like the world was caving in on the desktop PC enthusiast. Not this year. While the lime green of Xbox 360 was prominent along with the other consoles, the PC reestablished itself as a viable platform for new titles. Now don’t get me wrong — the console contingent was significant. But it was a nice melting pot of the two worlds. Definitely didn’t leave an “us or them” feeling. One disconcerting observation. The Microsoft booth was 75-80% lime green with the “Games for Windows” section on the far right side. Defiantly a minimal role. In that section was 4 (count ’em) kiosks hawking the oldest product in the Microsoft stable (drum roll please) …Microsoft Flight Simulator and specifically FSX. The old gal is 25 years old. Would have been nice for MS to respect her a bit more with some additional fanfare. Regardless, our resident FS team member expert, Hornit, found the right corner and got some hands on time. Word has it he’s quite quick through the Red Bull pylon course. At least quicker than some of the MS development team members (yeah, it’s an inside joke — don’t ask). 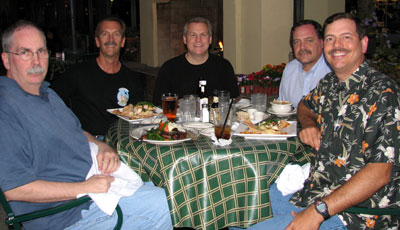 So our team was pleasantly surprised by all the unexpected new titles that our site members would enjoy. In other words, the death of sims has been greatly exaggerated. Again. Matter-of-fact, at least a couple of significant industry leaders told us it seems there may be a new spark to flight sims. Remember everything goes in cycles, and that goes for the simulation market. The retail days are gone, but the future seems brighter thanks to download distribution, mail order and fast broadband.

Trends in sims? Look for more storylines and involvement in the character. You’ll start to care if your co-driver gets hurt or your element gets picked-off by a SAM. That is a reoccurring theme we heard over-and-over from multiple devs. Also, you think you have nice graphics now? Bluntly, we got nothin’ compared to the “next gen”. Of course, that next gen comes at a price. See “Technology” below.

My favorite moment at this year’s E3? Well it wasn’t actually at E3. It was having a nice steak dinner while listening to three fighter pilots (Beer Camel, Chunx and Hornit) “talk”. All non-classified stuff, of course. I’ve never heard so many TLA’s* in one sitting.

A big thanks to Chunx, 20mm and Hornit for throwing themselves into the fray know as E3Expo 2006 and producing such excellent commentary and observations. You guys are the best.

Below are some “sounds bytes” from the show. All IMO of course: