Set up is fairly straight forward. You’ll be issued one serial number to use for both the installation and patching. Other than that, it’s a standard install (i.e., no issues or hidden idiosyncrasies) which shouldn’t take more than a few minutes.

The documentation is digital only, even with the physical shipment (i.e., it’s on the CD). I understand that Matrix are currently working on a Print On Demand system, which should be ready soon). For now, it’s digital only.

In any event, the documentation is more than ample. Here’s what you get:

I’m sure you’ll agree this is pretty impressive. The manual itself is great — for someone like me, who’s never really played many wargames. It’s been a huge help in learning how to command my virtual troops and not get them killed. Here’s an illustration of the kind of things covered in the manual: 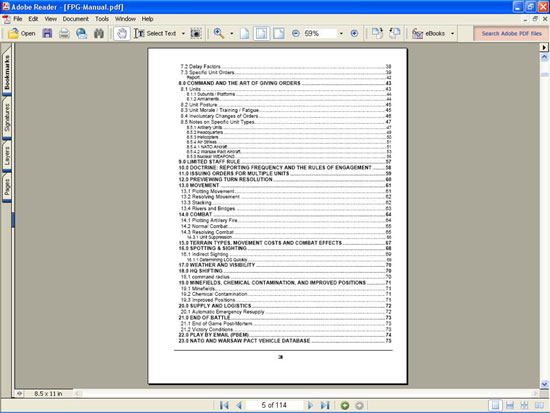 Pretty impressive, at least from my FNG perspective:

There are also two tutorial missions included within the game, and these are covered in the manual. They’ll teach you the basics — how to move your units or change their posture, etc.

Overall, the documentation is superb. Like I said before, I can’t voice for any hard copy documents, but what is provided with the digital download is great.

Okay, so now we’re getting to the meaty stuff — the stuff we can mess around with.

Now for the realism options:

“All enemy units spotted automatically”— pretty obvious what this means, and I keep it unchecked.

“Individual sighting required for combat”- your units must be able to see the other side to shoot at them. I always have this checked. Obviously, with artillery units you will simply give them map coordinates, so this rule doesn’t affect them, other than whether or not other units can somehow shoot at them without seeing them! They wouldn’t thank me.

“Automatic emergency resupply”— when a unit runs out of supplies, it automatically receives a small amount to keep it going. Again, I keep this off.

“Unit doctrine editable at any time”— basically, this allows you to change the SOP (standard operating procedures) of any given unit. This is one I keep enabled, and do actually sometimes change. More on the various SOPs later.

“Limited staff rule in effect”— this is my favorite. As a command, you would have certain limitations in real life – your C3 (command, control and communications) would only be able to handle a certain amount of information, and that’s reflected here if this option is active. You will only be able to issue a certain amount of orders per turn, meaning you’ll need to prioritize — which is half the fun. In addition, the amount of orders you can issue will depend on the extent to which your communications are being jammed by the other side.

(Now I have an image in my head of enemy troops sneaking up to your transmitters and smearing them in jam. I guess it’s not that kind of jam. Maybe it’s marmalade? Shut up, Fran) Moving swiftly on…

“Use stealth movement by default”— in other words, unless you change it’s SOP, then a unit will as much as possible try to take advantage of any cover or concealment offered when moving. Having said that, it seems to slow them down a bit and, for this reason, I keep it unchecked.

“Allow staff to request FSCC missions”— if this is ticked, then the computer will plan artillery and air strike missions itself.

You can also set the electronic warfare level between low, medium or high — this will influence the number of orders you can give in one turn if your limited staff rule (detailed above) is in effect.

Lastly, it’s worth pointing out that all these options can be applied to both sides, neither side, or just one. So you could, for example, have the Soviet side with a limited staff rule in effect while you, as Nato, don’t. But that’d be cheating, right?