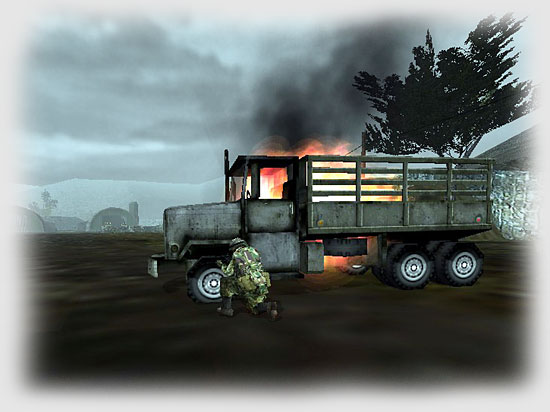 One of the best and longest lasting Ghost Recon fan sites is Ghost Recon.net. They still keep the public informed on the latest happenings of the Ghost Recon world, and even today as I type this, have just uploaded a new mission pack collection. I will download and check it out as soon as I’m done here. From what I can see on their download page, they offer 41 new campaigns, 35 total conversions, 10 unofficial expansions packs, 23 missions, and plenty more of weapons, maps, and packs.

I played the WW2 total conversion mod and it was incredibly done with all new WW2 style maps, WW2 weapons and uniforms, and the game play is spot on.

I’m currently playing the “No Easy Day” mod from DTD, a longtime Ghost Recon gaming/mod group. They have added a bunch of realism features, weapons and uniforms of today’s Special Forces type soldier. Here’s the brief on the mod which you can also get from Ghost Recon.net:

“New in this version 1.5 you will find -48 selectable MP characters, known bugs fixed, over a dozen new selectable enemy weapons added such as the AK74SU-Squad wep, AK47 W-GL, SCAR assault wep, RPG-7, M4 Taskforce, M4 Samco, and many more. Also added were more claymore and C4 kits for each category. Truthfully, too much to list. Even if you had the previous version, get the latest and probably last version of No Easy Day!”

What is the future of Ghost Recon? Here is my opinion. All or some of you may not agree with me on this. From what I’ve seen, the Ghost Recon that the PC gamer made so great is history — history due to the popularity of console systems like the Xbox.

Ghost Recon 2 was in development for a long time. Near the end of it’s completion, the PC version was cancelled and the console versions were released. They sold well and got great reviews. But it was obvious that they dumbed-it-down, turned it into more of an arcade squad tactical shooter than the Ghost Recon that made the game famous. I was more than disappointed that the PC gamer was left behind.