The Leopard I and II

In contrast to the American entrant in the SB Pro PE user-tank competition, Germany’s Leopard series has a far more established pedigree, though it does not have the Abrams tank’s combat record. The original Leopard specification grew out of a 1956 requirement for a replacement to the West German Bundeswehr’s M-47 and early M-48 tanks, identical to those being fielded at that time by the U.S. Army. A nearly ten year development program culminated in Leopard C1, first fielded in numbers by West Germany in late 1965. Nine nations signed onto the Leopard program, including NATO partners Turkey, Canada, Belgium, Denmark, Greece, Italy, Norway, and the Netherlands. In addition, Australia became a major user of the type. In SB Pro PE three Leopard variants take the field; first, the Leopard 1A5, then its cousins, the 2A4 and 2A5. 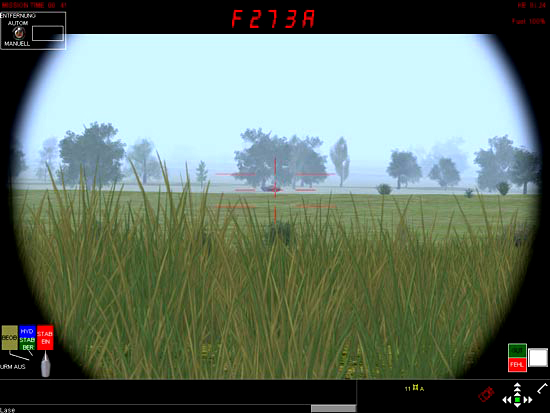 Leopard 1A5 derived from a 1980 requirement to supplement the West German Leopard 2 force then just reaching initial operational capability. With the advent of the later T-72 and early T-80 tanks across the Iron Curtain, West Germany began an upgrade program to stored early Leopard 1A1-A1 tanks that had entered service in the early 1970s, to supplement its arsenal of later Leopard 2 tanks. Leopard 1A1-A1 entered service in 1970. It had a gun stabilization system developed by the Cadillac Gage Corp. that gave the early Leopard fire-on-the-move capability, additional armor protection, added track skirts to protect the upper tracks, a better cooling system for the main gun, and PZB-200 low-light-level television image intensification systems. West Germany had over a thousand of these either in service or in storage by 1981, and a combat upgrade would get them in service fast.

A crucial part of this Leopard 1 upgrade program centered on the armament. Earlier Leopard marks equipped a 105mm gun, similar to the American M-68A1 piece, both of which were developed from the British L7A3 105mm gun. German designers wanted more firepower, and Rheinmetall AG answered the call with the L44, described above. In the end, the new Leopard 1 upgrade, Leopard 1A5, retained the 105mm gun, but its redesigned and enlarged turret had capability to mount the larger weapon if desired. The Germand had the benefit of the same type of improved 105mm ammunition available to U.S. M1 crews of the same time period. The 1A5’s fire control system was upgraded, comprising the Krupp-Atlas Electronik EMES 18 fire control system, developed from the system used on early Leopard 2 marks. Leopard 1A5 reached initial operational capability with its first deliveries in 1987.

Leopard 2 began development in 1967, while the Leopard 1 was just reaching service. It found its genesis in the fiasco that was the joint US-West German MBT-70 project. The original Leopard 2 prototype was called “Gilded Leopard,” an upgraded version of the Leopard 1A1 that itself had features from the MBT-70 project. Since its development, Leopard 2 has seen six distinct subvariants, and the later 2A4 and 2A5 are present in SB Pro PE . Like the M1 program in America, the Leopard 2 program dragged its feet until the mid 1970s, being spurred forward by the Allied powers’ analysis of Western tank performance in the Yom Kippur War. This revived U.S./German cooperation in tank development, on a model different from the MBT-70 project. Revised specifications for common components to the M1 program and the Leopard 2 program emerged. In fact, during 1976, the XM1 prototype met its German Leopard 2 counterpart head on in a set of trials at the Aberdeen Proving Grounds. There, the improved Leopard matched its American cousin in every category save armor protection, and for this reason alone America now has 4,000 M1 tanks in its Army rather than Americanized Leopards today.

West Germany learned from its tanks’ performance in the Aberdeen trials, and by 1979, when Leopard 2 reached IOC it was one of the most advanced tanks in the world. It carries the same type of steel/ceramic composite “Chobham” armor that American and British tanks carry. But from the beginning, unlike Leopard 1 and the early M1, Leopard 2 was equipped with the superb L44 120mm gun. It is stabilized, as is the 105mm gun on the 1A5, and carries a total 42 rounds. The MG3 machine gun, today’s 7.62x51mm version of the World War II MG42, is mounted both as coaxial and on a pintle for the commander, providing good anti-infantry support for this tank. Over 4700 rounds of ammunition for the machine guns are available to the Leopard crew. The Krupp-Atlas EMES-15 fire control system includes a passive thermal imaging system comparable to that used on the American M1 series tanks. Beginning with Leopard 2A4 in late 1985, a digital processing system comparable to U.S. tanks became standard production equipment. In addition, the gunner has access to a telescope as an auxiliary aiming device, that has 8x magnification. The commander has a special R-17 panoramic sight, that can be traversed through 360 degrees.