If you have heavy armor, like a MBT, then fight from a distance. Use the terrain for a hull down position, engage targets of priority and clear areas destroy buildings so the infantry can go in and capture. As a MBT or an IFV, you’re to provide support for the infantry. Let an infantry squad capture, while your squad of 4, can be in 2 vehicles providing cover. Co-ax gunner on top, ID those targets seen for the team. 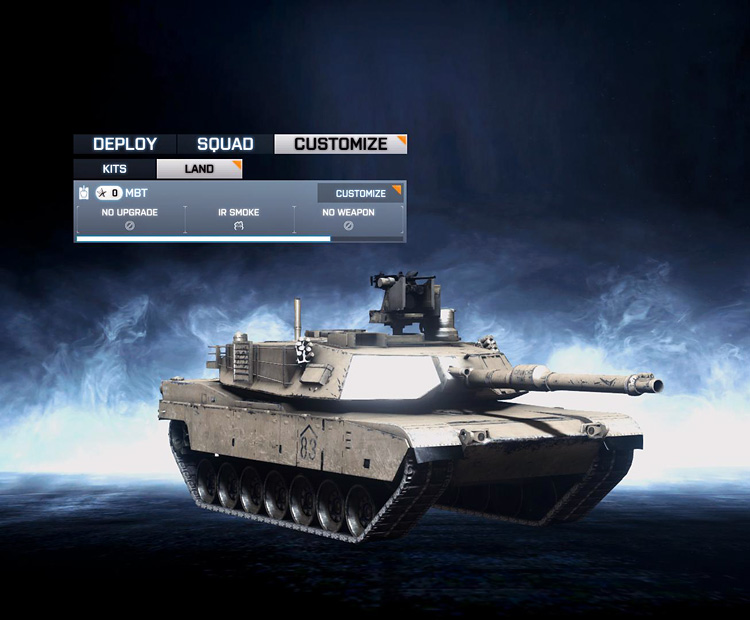 If you get damaged below 50%… pop smoke, back up, and repair, then re-enter the battle. Fellow infantry should keep an eye out for enemies sneaking up on vehicles. Use comms and ID to notify vehicles of impeding doom, and try to eliminate the enemy.

As for helicopters, the most important thing is, know how to fly the damn things. It isn’t easy. Learn how to keep it out of trouble using the terrain with pop-up and engage techniques. Do not use the helicopters as your personal transport to the front line only to airborne out of the copter. The helicopter, as with the other vehicles, should be back and engage from a distance. They should be covering the infantry squads as they assault. If you get damaged below 50%… get the hell out, go to a nice safe landing zone, land, repair, and then rejoin. Again, always have an engineer in any land or air vehicle.

Jets… Well, good luck! You tell me! The maps are too small for jets in my opinion, but just remember, a jet’s priority is other jets, helicopters, and heavy vehicles. Kill what you can to help the team.

There are a number of modes of play, but in this TAC guide we won’t cover the squad and team death match modes. Instead, we will discuss the two main modes played on most servers, including our own SimHQ server: Conquest and Rush.

In conquest you must capture then defend a number of points spread out around the map. You must be within a certain radius of a flag to first neutralize then capture it. The more teammates in that radius the faster it is captured. Unless you have a squad mate providing cover or doing something more important it is my belief that squads should always be together, and should definitely be capturing objectives together.

The key to conquest is controlling the most points longer than the other team, but also not die as much either. Each team starts with a number of “tickets”. Every time you die your team loses a ticket, so, do not die! Hopefully you have a medic or two (assault role) within your squad reviving and healing you. The key is to capture and hold the most points and not die.

What I like to do being an over bearing, bossy gamer, is take charge without permission and order people what to do. My idea for conquest is to have a squad assigned to each capture point. For example, Alpha squad is responsible for Alpha control point, Bravo for Bravo, Charlie for Charlie…etc. Then any left over squads are the reinforcements or specialties like armor or air. With a full server a side can dominate and win conquest mode pretty quickly when they use teamwork, basic tactics, and common sense. In the comms options you can choose to either have VOIP with your squad or the team. If you know the whole team, then I’d recommend everyone using that, just keep the chatter down. But it doesn’t look like you can change to one or the other without going into your game options, which could be deadly while in battle.

Rush is where one team is the attacker and the other team the defenders. You start with 2 position points up front in the map with the rest of the map closed. The attackers spawn in and try to set charges to 2 M-COM bank ATM’s. Once both M-COM’s are blown up the map opens up to the next 2 M-COMS. The attackers want to push and blow up the M-COMS till their all gone. While the defenders of course want to stop the attackers from blowing up their M-COMS.

The key to this mode is, ATTACK IN FORCE. Say it with me out loud: ATTACK IN FORCE. That doesn’t mean that you parachute in, HALO jump in, or whatever then go run off on your own to get kills. That means at least as a squad and preferably as a team, you should spawn in, meet up and ATTACK IN FORCE.

What I like to do is use one squad as a guinea pig, get them attacking in one direction, pulling all the “I just want kills” defenders away from the objectives, then send in another squad or two to assault a position. Use smoke to cross dangerous areas. Get as many people to the objective, and someone sets the charges while everyone else sets up defensive positions. Also, don’t forget the use of a recon guy up high identifying enemy targets and / or the support guy laying down suppressive fire. When assaulting a location, timing is everything. Lead with grenades, and assault in force. If you die, spawn back in with your squad. If you’re the last man in your squad, go prone and take cover somewhere. Because your teammates will spawn in behind you in the same position you are: prone. ATTACK IN FORCE

When defending, use the tools you have how they’re intended — landmines for vehicles and claymores for infantry. Each squad should be defending an objective while the other squads thin out the assault force. If an enemy has planted explosives on an M-COM, all available units should be making a B-line to disarm it. The enemy is probably hiding somewhere near by, or thrown some C4 near by, so lead with grenades, clear that area and disarm the damn thing. If 2 squads of 4, that’s 8 people… go to an M-COM, 1 guy has a pretty good chance at disarming. If we lose an M-COM, you’ve seriously hurt your team. Play the objectives. You are not playing Rush mode or Conquest mode for the kill count. If you want that, go play the death match games. When defending, use those ID skills because if you ID a few enemy moving up to an objective, the whole team see’s them on the map, knows what direction they’re coming from, and can counter attack. Communications is the key.

Like I said in the introduction, these are just basic tactical ideas to get you going, and not meant to be some hardcore “you must do this” tactics (well, except for ATTACK IN FORCE). I’m sure there are better ways, but the point is to work as a team and use some basic tactics when playing, and always play the objectives.

What to do, and what not do

Now that said, as the administrator for our SimHQ Battlefield 3 server, If you play on the SimHQ server then you agree to play as a team, with the objective in mind. If you’re seen blatantly violating good play rules you’ll be kicked from the server for the event. A repeat will get you banned from the server. Now we’re not going to let that happen unless there’s no other choice.

…then you’ll be gone from the server. Play the objectives. Play as a team, or don’t play on our server.

See you on the virtual battlefield. Better bring that “A” game!