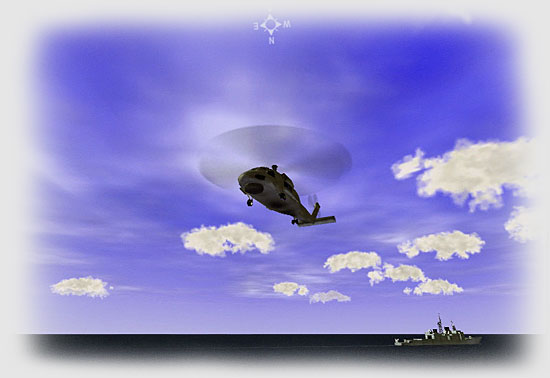 Q. How will we play the air assets?

A. The MH-60 and P-3 are independent entities. Of course, all platforms are working together and share data over the Link (so in that sense, they are always working together) but the player has total control over the two aircraft in SCS-DW. The MH-60 always has a tie to its FFG; there is an automatic transmission of data to the FFG (transmits sensor data — sonar or radar data) and, therefore, allows for increased sensor coverage.

The flight model takes into account all variables of flight (thrust, air density, lift, etc.) and is highly competent and believable. Full joystick support will be available for the P-3 and MH-60 — so those who want to take full control of their platforms can do so.

Q. Will the player be able to fly the air unit, or just instruct the pilot on a course?

A. Both… one of the primary features of SCS – “Dangerous Waters” is its scalability. Dependent upon the player’s preferences, the game can play as a point-and-click military strategy game or a full-fledged simulation (with flight model and joystick control). The autopilot will follow ordered waypoints and maintain altitude and course if enabled, but if the player chooses to disable autopilot and take control of a landing for himself (as an example) — he is able to do so.

Q. If you can’t “pilot” the air unit, how will you control it?

A. Well the player can pilot it, if he’d like to. In addition to that, the player has control over the playable platform from the Ship Control / Pilot station through a mouse-driven interface, by entering waypoints on the NAV map, or simply by entering new altitudes/depths, speeds and course in the taskbar along the bottom of the screen.

Q. How do I change stations — is it the same for online or offline?

A. Every station (or group of stations) has a corresponding icon on the pop-up station panel. However, after a few days of playing, I think most people use the function keys (F1 – F12) to get where they need to go. Everyone plays differently, so we try to provide redundant inputs wherever possible (keyboard shortcuts especially).

Q. Can we perform missions other than patrols and sub-hunts?

A. The diversity and versatility of the platforms enables dozens of potential mission types. The fact that there are 19 quick mission types (so far) is a testament to that. The submarines are still as flexible as ever — performing land attacks, Special Forces deployment, ASW, ASUW, and reconnaissance/threat assessment (to list a few). The addition of a guided missile frigate and its accompanying helicopter expands the list even further with gunfire support, helo as a forward sensor, rescue operations and surface-to-surface engagements. Lastly, the P-3 is obviously very capable at ASW and reconnaissance but can also assist in ASUW operations.

We certainly are not at a loss for mission possibilities… the seven platforms are highly capable in many situations.

Q. Can I search for survivors in my Orion, or pick them up with my Seahawk?

A. The P-3 can only request to land at allied airports, but visually identifying downed pilots and sending out an MH-60 to retrieve them is certainly within the realm of possibility. Many missions are centered on those sorts of activities and serve as a nice change of pace from the usual “detect, classify and destroy” core game play.

Q. Will there be clickable cockpits / panels, or will I have to use my keyboard?

A. All cockpits are rendered and interactive. There are some shortcut keys to certain operations but for the most part the interaction is done in the stations themselves with tangible, visual feedback. The cockpits can be hidden to see a full-screen 3D view if the player chooses to fly the aircraft, but that’s provided just as an option for the sake of player preference.

A. Ship (and sub) pitch and roll is now physically modeled, and is affected by waves in our new ocean surface model, as well as by wind and currents. In very shallow water it should be possible to bounce off the bottom in a severe sea-state. Subs risk unintended broaching or submerging, and the sail can even induce a rolling moment in submerged high-speed turns, potentially causing some dangerous unintended changes in depth.