This is the hardest thing for a game of this complexity to do well. You’ve got a tremendous amount of horsepower under the hood in terms of raw data, a gigantic playing field and a whole lotta toys out there to play with. This could get out of hand real fast, and we’ve all seen ambitious wargames fall apart because of a clumsy interface. Fortunately CMANO does an excellent job of building on games of the past, while adding some refinements of its own. The end result is a largely intuitive and easy to use system.

Interface feature: Select a group & also see the individuals in the group (and in their current formation) 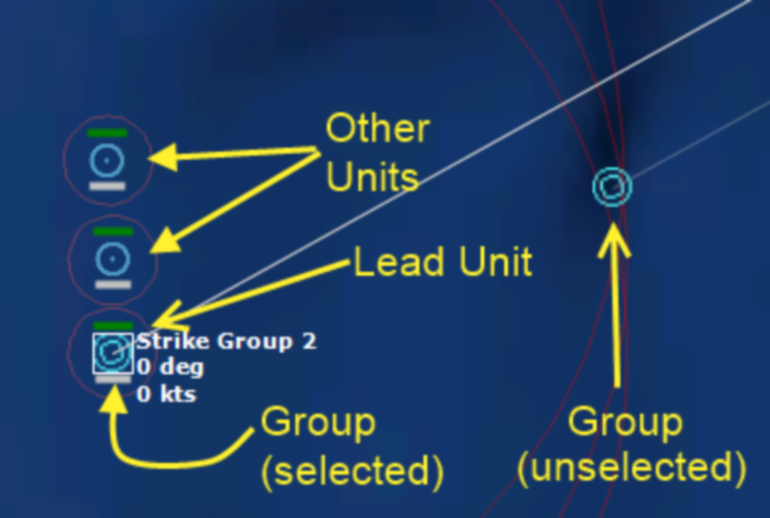 Multi-select and giving orders to all units… 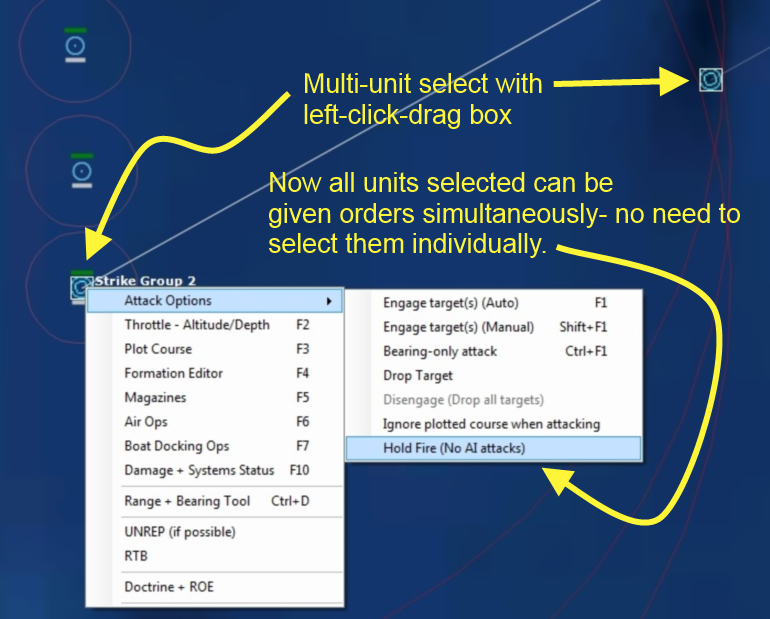 Maybe it’s because I’ve played a lot of Harpoon, but I felt very competent with the interface within a short period of time. The designers chose to keep a lot of the same UI conventions that Harpoon used, and even the same hotkeys. This was a clever design decision, as many people who are “into” this genre will have played Harpoon and so the UI can build off their experience, thus easing the transition. They also avoided the pitfall of “making things different just to be different”.

The UI is also quite flexible and there’s usually multiple ways to get something done, which is a big improvement over what’s gone before. The team’s decision to use the standard Windows©- UI also pays huge dividends here, as we all know from years of experience how “things should work”. I never found myself looking at something and thinking “What the heck does that do?” This is quite a testament to the amount of refinement and playtesting which must have gone into this UI. Pretty impressive for a 1.0 release (now 1.01).

One thing I absolutely loved was how the entire interface is always still accessible, regardless of what subsystem you happen to be using. A concrete example is helpful to illustrate this.

Take for example the screen shot below. Here, I’m creating a Mission (more on that later), but I forgot to look at what aircraft are available at the base I wanted to stage the mission out of. You might think you’d have to drop out of the Mission planner, go find the base, and then see what units are there. But in CMANO, you can still fully access the entire interface, allowing me to simply find the base on the main map while still in the Mission Editor, click on the “Aircraft” button, and immediately see what’s there. Very nice.

It sounds like a small thing, but the interface is full of similar thoughtful details which add up to a very easy-to-use system that’s both intuitive and powerful. I call it an “Air-Naval Operating System”. 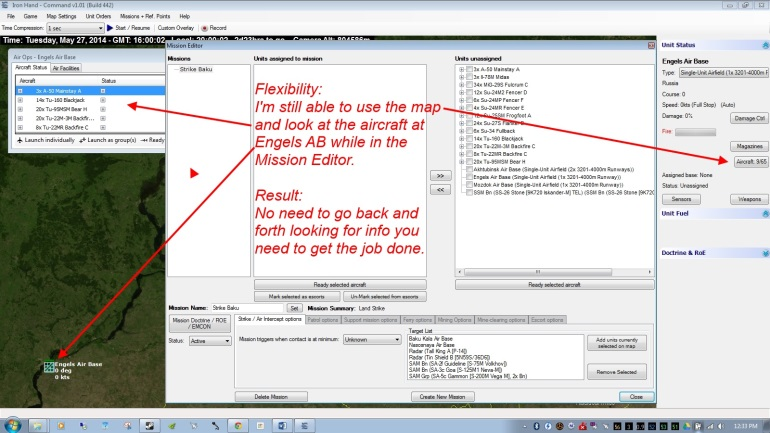 The interface looks quite clean (even austere) for something this complex. Despite this, it’s rich and flexible enough that I was able to get my “work” done without an excess of clicking, diving into sub-menu’s or (worst of all) going to another screen entirely. As far as how it looks, I think it’s pretty attractive for a game of this type. It incorporates only the graphic elements you need, while stopping short of adding unnecessary “chrome” that might otherwise clutter up the display. Bottom line: The graphics here have a purpose beyond just looking good, but they happen to look pretty good anyway.

CMANO’s look and feel goes in an entirely new direction, and takes Google Earth as its inspiration, rather than the OJ-663 console of a DDG. It’s rather impressive to have the entire globe available in every scenario, even if you’ll normally be using only a small part of it.

The map has an ability to show elevation at a glance using something called a Relief Layer, and does it better than anything I’ve ever seen that wasn’t true 3D. And this isn’t just eye candy – it’s actually important for mission planning.

With the Relief Layer activated, you’re able to see elevation changes much more easily, and therefore able to incorporate them into your planning. Because of the excellent sensor modelling, things like a ridge or a mountain can block radar, and you can definitely use this to your advantage. This opens up a lot of possibilities such as: If I can mask my airstrike behind a ridge, I might just be able to sneak up on that S-300 site. 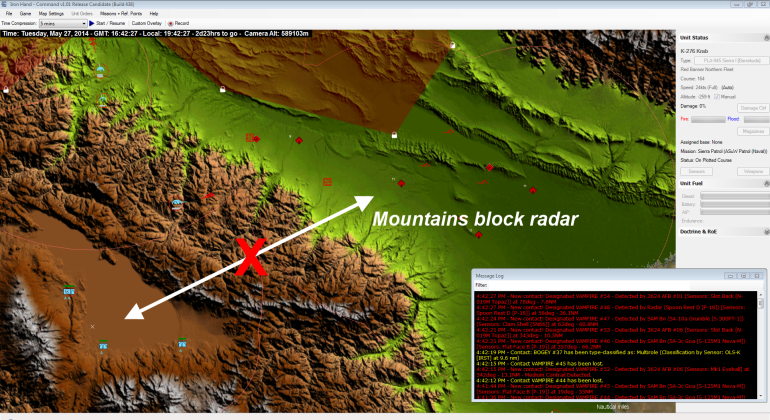 One area of improvement would be provision for multiple windows to cover different areas. Harpoon 3 allows this, and to this day it stands out as a great feature. It would be handy to have, say, a small window with a strategic overview of the operation, another larger one for actual operational planning, and yet another for a zoomed-in shot of your main carrier group or whatever. With multiple monitors, this could get pretty wild (and perhaps bring your PC to its knees).

As it is, you can already use multiple monitors to rather good effect. I have a triple-screen setup with the main window stretched across 2 screens, and the 3rd screen used to hold the Message Log. Because it’s a standard Windows app, you can resize the main window however you like, easily spanning it across whatever multi-monitor setup you may have. And as Windows itself changes, the accompanying interface refinements will then devolve upon CMANO as well.

More Hotkeys for some of the map elements would be a welcome addition. It’s a bit of a drag to have to toggle things like the various range rings using only a drop-down menu, and it makes things a little slower than it could be, especially if you’re wanting to toggle map features off/on.

I’d also like to be able to Shift- or Control- select multiple units, rather than just having to drag-select them. There are situations where the units you want to select aren’t arranged in such a way that you can get them all with a drag-select rectangle, and then there’s no way to add those other units to the one’s you’ve already selected. See the example below.

Update: The 1.01 release just came out and improved the already-good responsiveness of the game. The startup time also decreased massively and they continue to tweak the interface, incorporating improvements that were suggested by the Community via the relevant Matrix Games forum. One advantage here is that these guys used to be just like us, and they seem to take the suggestions of players very seriously. A quick perusal of the 1.01 “What’s New” document shows quite a few features that I saw requested in the forums – many from just a few days ago.