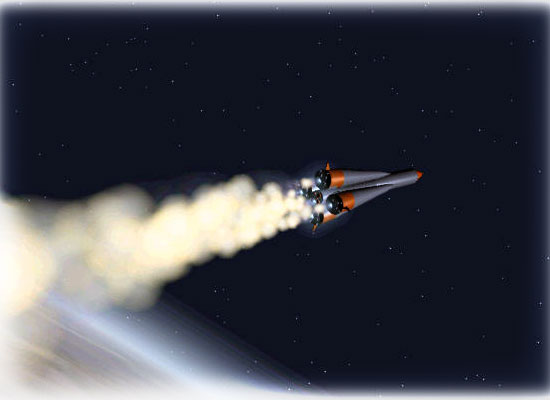 Microsoft’s Flight Simulator series introduced a lot of current-day flight simmers to the genre we’ve all come to know and love. It’s the quintessential civilian simulation, existing for nothing more than the glory of flight. It covers the entire world, not in the grandest or most glorious of detail, but it’s there and you can fly about anywhere you want. One of the most attractive aspects of MSFS is the very active modding community that produces all sorts of textures, airports, cityscapes, and aircraft for those who fly in it. You’ve all seen BeachAV8R’s great reviews of add-on aircraft for MSFS that are out there. It is simply the jack-of-all-trades of pure flight.

Take that one step further, now. How many of us grew up when great spaceflight movies like Countdown or Marooned were on late-night television? How many of us saw the Apollo 13 flight for real? Back in the late 1960s and mid 1970s, we all had a front row seat for the space race, the drama of the first moon shot (I was in kindergarten then, and glued to the television). Star Trek was on television, and I for one used to beg my mom and dad to let me stay up on Fridays at ten so I could watch. I wanted to fly in space… although girls weren’t allowed back then. I cheered when Sally Ride first flew on the space shuttle, but that’s another story. And recently, the Chinese have brought back some of that excitement with their first space flight, the first man in space that wasn’t launched by us (I’m an American) or by the Russians. I kept up with the first Chinese flight on CNN and the BBC, and remembered when spacefight wasn’t a routine thing. We went to the moon when I was a child. I’ll never forget seeing Neil Armstrong walk on the moon.

A Love of Space Flight

I bet a lot of us are frustrated astronauts, cosmonauts, or taikonauts. And spaceflight isn’t anything like as easy as Captain Kirk made it look. But Dr. Martin Schweiger, a British professor and scientist at University College, London, has opened the world of real-physics spaceflight to us all, with Orbiter. Orbiter is freeware. A FREEWARE simulation, picture that. Orbiter doesn’t have Starforce, or issues with large and monolithic corporations, or anything else-just one guy and a lot of dedicated mod artists all over the world who share one thing: a love of space flight. Dr. Schweiger has been working on this for years, since its first release in November 2000. Its current build is 050216, released in February of last year. It can be downloaded by anyone, from Dr. Schweiger’s school web site here or here, which is the same site. You download it in three .zip packages, and if you have a high-speed Internet connection it is a quick and painless retrieval. The three packages include the required Base package, which contains the 050116 version, the Hitex package, which adds certain high-definition textures, and the sdk package, which you’ll need if you want to plunge into the world of modding Orbiter. Modders should keep in mind that Orbiter is not open-source, but it is mod friendly and has an active community. Add to this the two patches to get you to the current version, and one file called OrbiterSound30, and you’re in business. You can get all but the sound file off the Orbiter web site. I had to use Google and hunt for the sound files, and trust me: you want this. Without it, you don’t get sound in your sim.