I had the chance to try out the TrackIR 5 with several games including IL-2 (yeah, it was modded), Aces High, and DCS: Black Shark.

For those that don’t know, I am a veteran of the TrackIR versions, having owned both a TrackIR 2 and a TrackIR 3Pro over the years. My reviews of both units can be found here and here on SimHQ. Needless to say that after playing with the TrackIR 2 and later the TrackIR 3, I became one of the biggest fans of Naturalpoint’s devices. I still use the TrackIR 3 regularly and it has given years of service for me.

My comments on the TrackIR 5 is a general overall opinion of how the device works with the games overall. In reality the TrackIR 5 works fundamentally the exact same way as the TrackIR 3:PRO that I currently have. The issue that most of us older TrackIR 3:PRO and TrackIR 4:PRO owners will want to know is if an upgrade is necessary.

First, lets address the claims by NaturalPoint regarding the new product. According to the TrackIR 5 web page, the device claims 640×480 resolution. More importantly the field-of-view of the device has increased to 51.7 degrees, which is an increase almost 6 degrees from the older TrackIR 4 and 19 degrees more than the TrackIR 3:PRO. What this is supposed to translate into is much more precise head movement and control of head movement in the game. There are additional claims about the pixels and other stuff but most of that seems like mumbo jumbo to me. They say it is more precise in these things and I will give them the benefit of the doubt in that.

Two of the games I had the opportunity to fly the game had native six degrees of freedom (6DoF) support. For those that have no idea what that means, essentially the TrackIR from version 3 to the current version 5 have the capability to track not only right and left head movements but also inward and outward movements and side-to-side movements. What this means for games like Aces High, Battle of Britain 2, DCS: Black Shark, Lock On and other air combat sims is the ability to not only look around in the cockpit but also the ability to actually move your head around to keep track of that bogey.

The first major difference is in the new TrackIR software. The TrackIR 5 uses new software which is much more precise with a completely different calibration menu from the software that was originally with the TrackIR 3:PRO and TrackIR 4:PRO. Instead of watching a head move around as you turn your noggin’, you now get a spherical axis that shows you exactly how fast you are panning. As you adjust, you can see how fast your adjustments work. While you can see the difference with the older software, it is much easier to tell if the changes you made have achieved the desired effect. In some sims, it takes quite a few sessions of in and out of the cockpit environment to get the panning speed where you want it, but the new software makes the precision adjustment much easier. The finalized version of Track IR5 software was released on August 10th. 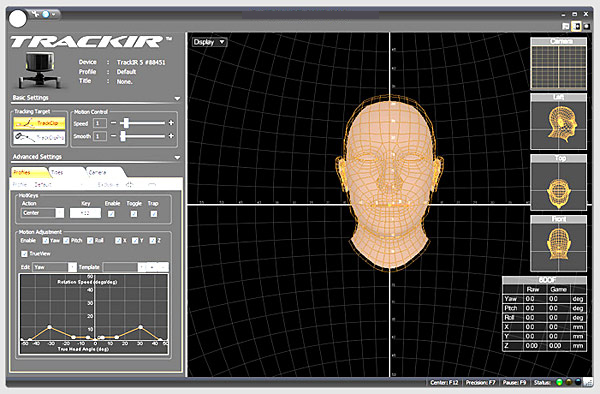 As I’ve said before, If you are serious about flight simulations and really want to get the most out of them, then you need to get a TrackIR system especially for dogfight situation awareness. The TrackIR has taken the place of the hat switch for me. I rarely, if ever, use the hat switch on my controllers anymore.

Okay, how does the device work in-flight compared to my TrackIR 3:PRO? I can honestly say that the TrackIR 5 is much better in both targeting accuracy and ease-of-panning. With the TrackIR 3:PRO I would still get nasty cases of what I call the “Carrie syndrome”. Carrie syndrome is a condition where you would turn your head to the right or left only to find your view located somewhere to either the rear and back or down and to the right. This would get very annoying if you were trying to figure out where the bogey chasing you went.

I can say that the TrackIR 5 has minimized (but doesn’t totally get rid of) this phenomena. If I jerk my head around I can still manage to virtually twist my neck, but it takes a lot more head jerking than with the TrackIR 3:PRO. Using the TrackClipPRO instead of the reflective hat clip also seems to help in minimizing this problem. Essentially, the TrackIR 5 hardware does a better job of keeping-up with the action.

Tracking in DCS: Black Shark was clean and precise. It took a few attempts to adjust the device to allow for full head movement. For some reason it would stop at the 9 and 3 o’clock positions, but I corrected that with the software. Once I got the calibration, it was much smoother than my TrackIR 3:PRO. In fact, I was amazed at how much better it was than my TrackIR 3:PRO. With the TrackIR 3:PRO you would tend to have what I would call “head weave”. Unless you were able to completely keep your head still you would get some mild head movement in the game. It wasn’t a game killer, but if you were easily prone to motion nausea, it could be a little bit of a problem.

The TrackIR 5, at least for me, has effectively eliminated this. Since the device uses a much larger resolution and field-of-view, it is more forgiving of those very slight movements that are unconsciously done while flying. If you are unable to keep your head relatively still, then you will probably see this effect but for the most part, unless you have the device set for extreme sensitivity, you will find yourself much more stable in flight.

Aces High was exactly the same way; the game was smoother and much more under control. I do admit that the difference, at least to me, wasn’t as noticeable as it was in DCS: Black Shark but it does tend to increase control and the “Carrie” effect was much less noticeable. The head shake proved to be better as well.

The IL-2 Series, as most people know, is not 6DoF supported officially, but there are mods out there that have given the game “kinda” 6DoF capability. In this case, the 6DoF works well for the most part, but like Aces High I didn’t notice as much of a difference as I would have expected. Probably because the game wasn’t designed originally for 6DoF and isn’t as precise. I don’t know, but still the TrackIR 5 works very well with it.

So overall, compared to the TrackIR 3:PRO the TrackIR 5 is a significant improvement, especially for newer games that are optimized and developed with full 6DoF in mind. We should expect upcoming sims to take even more advantage of the TrackIR 5 and its capabilities. If you own a TrackIR 3:PRO or an older device like the TrackIR 1 or TrackIR 2 then it probably is time to upgrade (as I now plan to do after testing the TrackIR 5 for this review). I thought about it when the TrackIR 4 came out, but after spending hands-on time with the TrackIR 5, I have decided that it is worth my upgrading.

While it isn’t critical to update from the TrackIR 3:PRO to the TrackIR 5, it is a significant improvement in the technology hence the quality of the SA. I suspect that if you are easily nauseated, the TrackIR 5 will help alleviate the feeling (but won’t get rid of it completely).

For me, it is like upgrading from a CH Combatstick to the CH Fighterstick. Both work fine. Both are similar. But you get a bit more from the Fighterstick over the Combatstick. It is the same with the TrackIR 5 over my TrackIR 3:PRO. You can still get the TrackIR 4 at a greatly reduced price from NaturalPoint. I am sure it is fine for any game currently out there, but if you are planning on seriously flying in furballs on the sims now in development, I honestly think the TrackIR 5 is the way to go.