Features and fixes Logitech should build Into the next G2x

Give the wheel-mounted buttons a unique tactile feel. Provide shape or texture variation in the button faces, such as Braille-style pips, to give each a unique tactile feel. Also, keep their location far enough from the wheel rim to ensure ergonomic operation. Future products could include one or two rotating switches, like F1 cars have.

Improve force feedback wheel’s on-center feel and response. Smoother, quieter steering action is nice, but not at the expense of a huge null at wheel center that compromises straight line tracking and increases workload.

A more capable LED/LCD driver display that is detachable. Ultimately a small, monochrome LCD, MOTEC-style display that interfaced with the game would really rock. Something only 3x bigger than a wristwatch would probably be enough, and could show things like relative rpm, speed, gear and laps remaining.

Pedal Refinement. The pedals are damn good in their current form. Perhaps the next product will be the right time to introduce an inverse-resistance clutch pedal, force feedback in the brake pedals to replicate wheel lockup or ABS, or a brake with a load-sensor instead of a potentiometer.

Include a Sequential Shifter. One way or another, the sequential shifter needs to make a return in the next Logitech product.

Logitech Profiler for Dummies. Offer tailored, game-specific settings options and suggestions as well as enhanced tool tips or tutorials on what each slider function does and how games will react to various settings. Work with simulation developers and leading sim racers to include their recommended game-specific settings to maximize the experience without excessive research or trial-and-error by newbies. 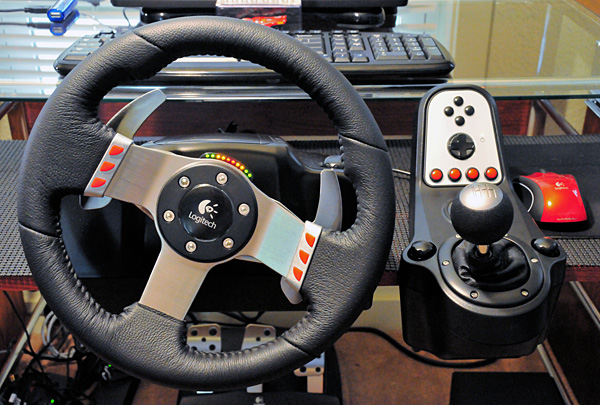 Despite years of media pundits predicting the simulation genre’s demise, Logitech continues its superb support of our small, demanding (and sometimes irritating) community with yet another high-quality, well crafted and feature-packed racing controller that improves the breed.

Although this latest effort is merely an evolved version of the already superb G25 wheel, the G27 reiterates Logitech’s commitment and desire to satisfy the sim racer’s needs. Overall, the G27 retains all the goodness of the G25, and piles on a wide array of highly desirable new features and refinements. The pedals are fantastic. The wheel is quite the work of art, both inside and out. The G27 is yet another product the Logitech team can take pride in, and something the simulation community will appreciate. But for all the improvements, the G27’s feature set fails to make one critical step forward, and takes one big, unfortunate step backward.

With the appearance of simulation-level racing titles on the Xbox 360 such as Race Pro and Forza Motorsports 3, Logitech’s failure to produce a wheel cross-compatible with the dominant gaming console hinders the growth of the sim racing genre at a critical juncture. For fans of modern GT or touring car racing, the decision to omit the sequential shifter will be a big disappointment. That omission may be enough to keep some consumers from parting with their G25 — or drive them to rival products that still offer the option. We can only hope that Logitech’s engineers are reading this review, and get the message: We need a quality, multi-platform racing wheel, and we need our sequential shifter back! (…and a handbrake would be nice, too). 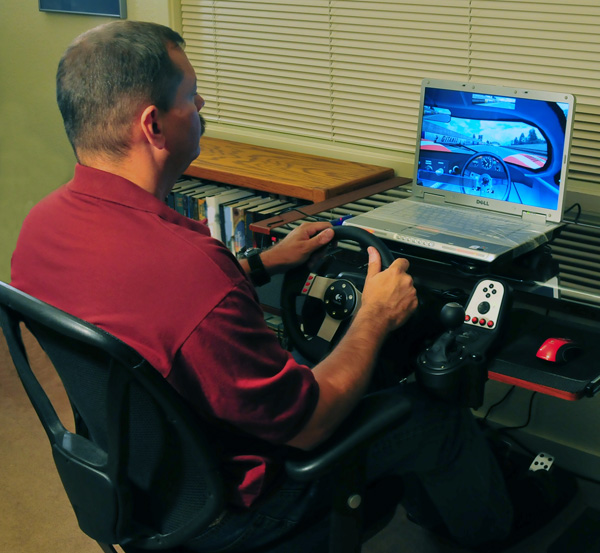