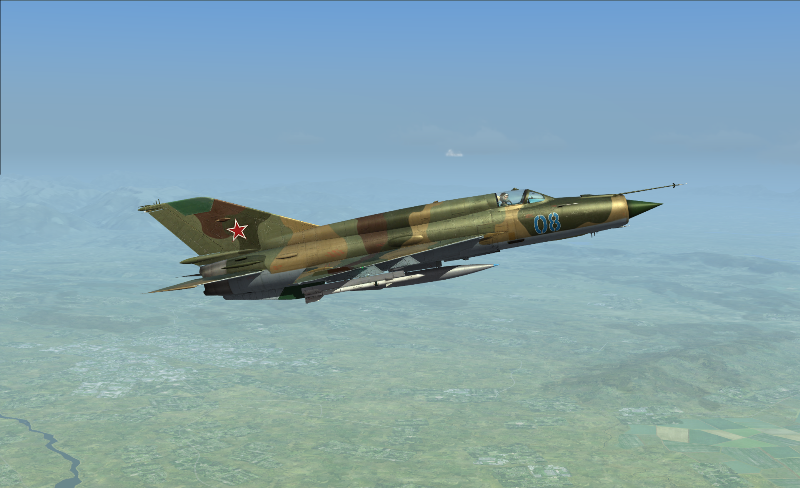 Some administrative details before we get to the fun stuff: this preview article is based on a limited pre-release beta that is believed to be a fair representative of what may eventually become the retail product. With the understanding that some features may be added, removed, or modified prior to the release, we give you this preview article which is simply a non-critical look at the features that may be included in the retail release. As usual, all material is subject to change, and all errors in content and facts are the author’s and the author’s alone. A note of disclosure: the author was provided a product key by Leatherneck Simulations for the purpose of this preview.

DCS World is a free-to-play flight simulation environment that ships with two free aircraft, the Su-25T Frogfoot and the TF-51D Mustang. You can download DCS World here and pick up any additional modules you’d like here. Remember that while you can download any of the other modules for free, a paid-for activation code (aka license, aka serial number) is required for each module in order to actually play it. Only install modules for which you have an activation code.

Back in 2008, Eagle Dynamics and The Fighter Collection set a new bar for combat flight simulators with the release of DCS: Black Shark and have been moving the bar progressively upward with each new module. Belsimtek was the first third-party provider to tackle a DCS-fidelity simulation, blowing us away with first the UH-1H Huey and then the Mi-8MTV2 Magnificent Eight helicopter simulators, both of which surpassed all reasonable expectations, topping off their accomplishments with the F-86F Sabre. Now a new contender has joined the arena: Leatherneck Simulations with their MiG-21bis. 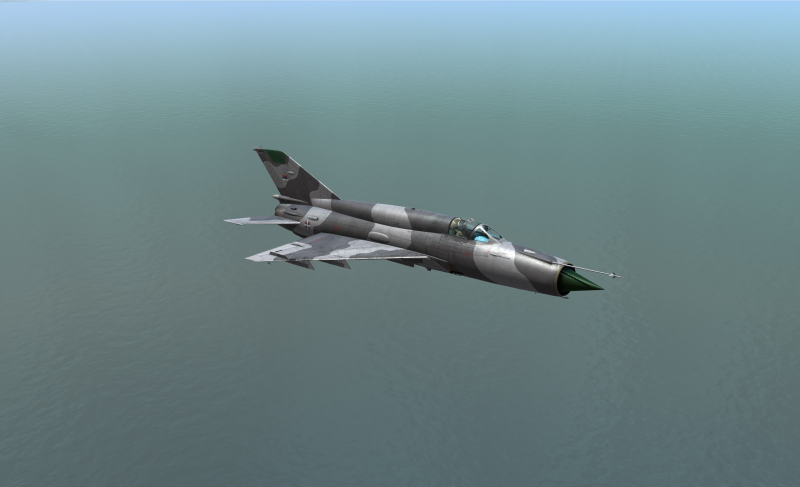 The MiG-21 (NATO reporting name: “Fishbed”) aircraft comes from a special time in aviation history, the era of transition from propeller to jet aircraft. While jet turbines weren’t exactly experimental technology in the early fifties when the MiG-21 was designed, there were still many lessons to be learned about the complexities of jet engines and supersonic flight and each new jet aircraft demonstrated a dramatic step forward in the technology. Today’s Nth generation fighters owe their success from climbing the shoulders of giants like the F-86, the F-100, and, of course, the MiG-21.

The “bis” in MiG-21bis is Latin for “twice” and, in this sense, the MiG-21bis represents a reboot of the aircraft line. Equipped with an more powerful engine, improved avionics, a lighter airframe, increased fuel capacity, and other upgrades, the MiG-21bis was a popular export fighter, shipped to at least 19 other countries. 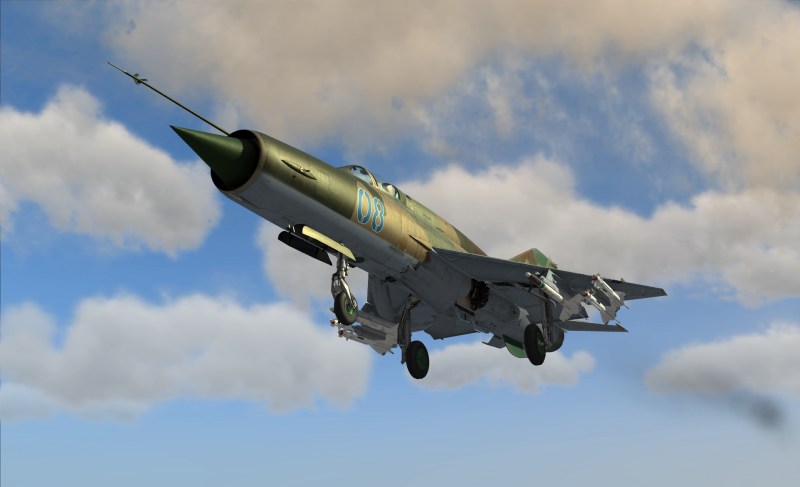 A lawn dart with bite!

Designed primarily as an interceptor, the MiG-21 has great acceleration, Mach 2.0 capable, high service ceiling, and a disappointing endurance. While a delta wing is better suited for supersonic flight than a Hershey-bar wing and boasts superior wing loading, the planform suffers from greater induced drag (drag when producing lift, e.g., maneuvering), shedding energy faster than Miley Cirus shed her decency (i.e., in a twerk of an eye). This supersonic lawn dart carries air-to-air missiles as well as bombs and rockets and deliver them all with decent precision.

The MiG-21 has a very characteristic look. The single-seat interceptor houses its twin-spool Tumansky 69.7kN (15,700 lbf) afterburning turbofan engine in a pencil fuselage and tailed delta-wing configuration. The single engine inlet at the front houses a prominent shock cone that contains the radar antenna for the RP-22SM Сапфир (“Sapfeer”, or “sapphire” in English) radar. An enlarged dorsal spine flows smoothly from the unmistakably Russian glass cockpit to the severely swept-back vertical tail, giving the MiG-21 a unique silhouette. The little antenna sticking off the chin like wiry whiskers show that Leatherneck Simulations has given us the Fishbed-N variant of the MiG-21bis with the Polyot ILS system (the Fishbed L had a Lazur datalink system instead of the ILS). The Fishbed N was the final generation of the MiG-21bis – the MiG-21bis bis, if you will. Or was it the bis bis bis? Anyways, I digress… 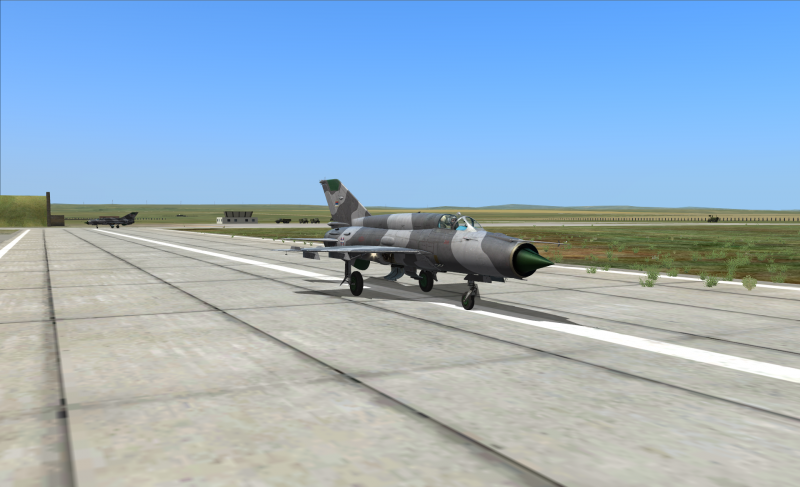 She’s a beaut to fly, but a bit of a beast to taxi.

The modelers of DCS: MiG-21bis not only nailed the MiG-21bis’s appearance, capturing its unique characteristics, but the attention to detail is nothing sort of astounding. Details are everywhere: in the external textures, the animated moving surfaces, the unique bumps and nodules and bits of equipment sticking out of random places of the aircraft, the plethora of cockpit controls, scuff marks around the rudder pedals, etc., etc. 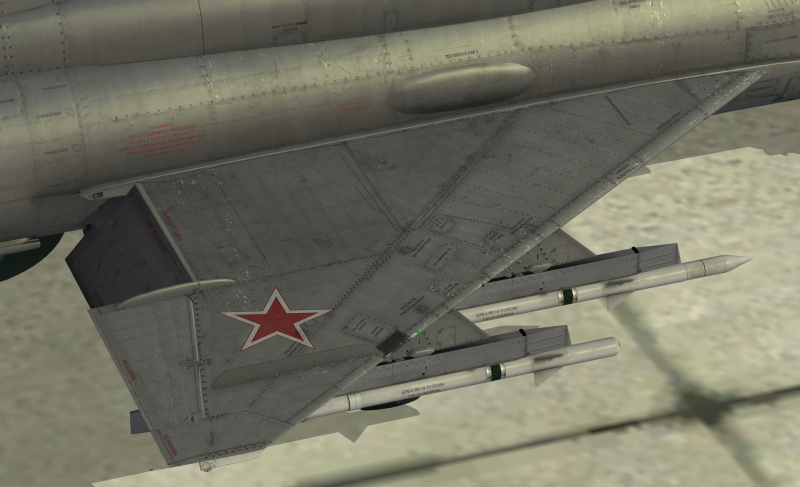 If you’re not blown away by the level of detail, you’re not paying attention. Rivet counters should be very pleased with these models and textures. 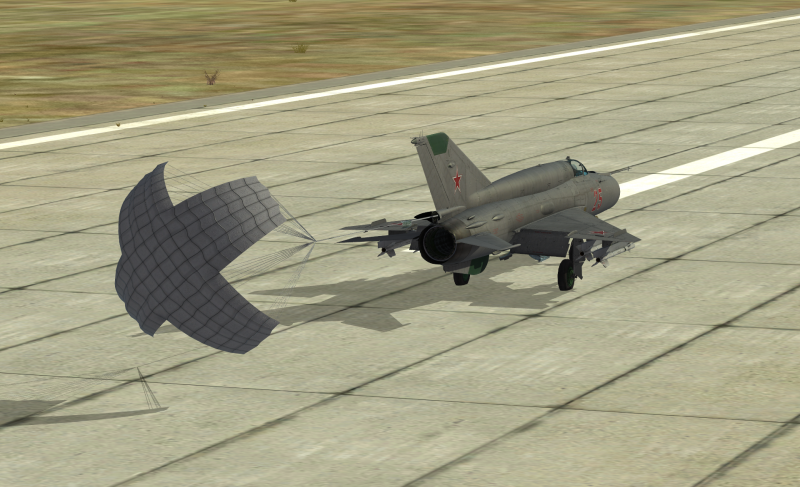 More proof that duct tape and bailing wire can fix ANY problem.

The landing gear bump and jostle as the aircraft rolls down the runway, the aircraft pitching and rolling on its suspension. 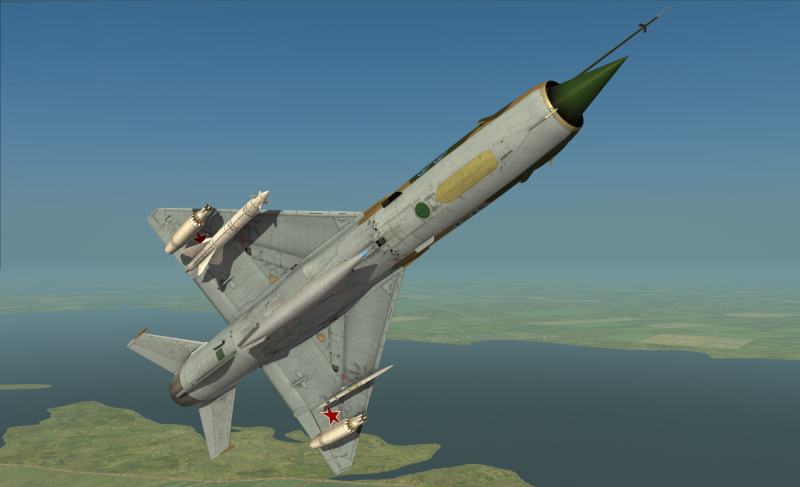 Don’t you just want to reach out and rub its belly? 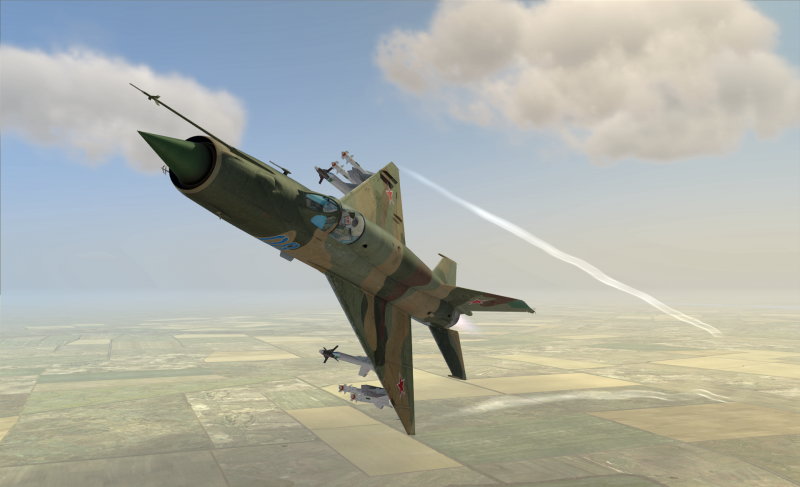 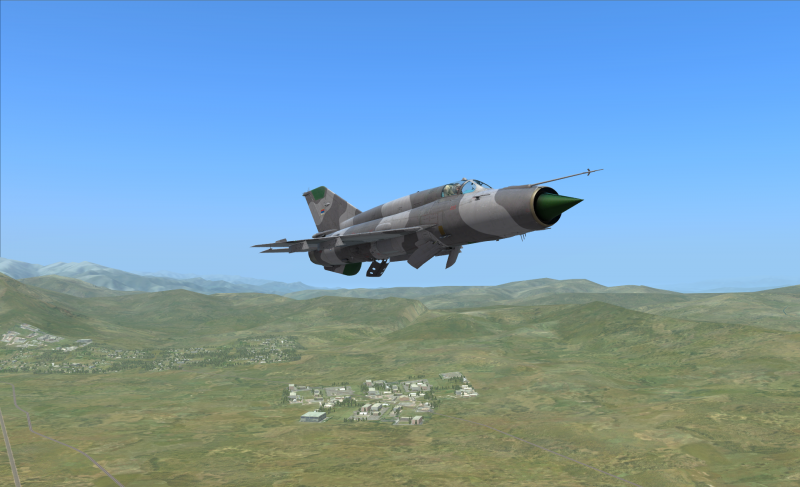 Is it just me, or do the underside airbrakes give the MiG-21bis a fishy look? 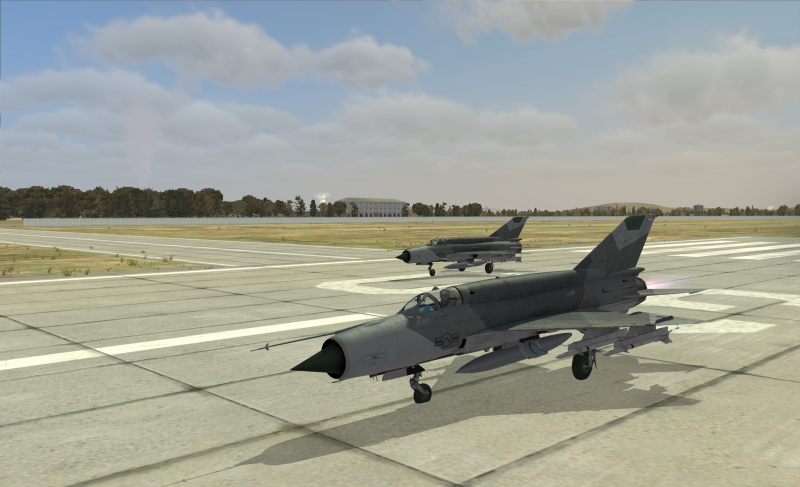 While not strictly monogamous, MiG-21bis’s are very social creatures, rarely seen on their own in the wild. 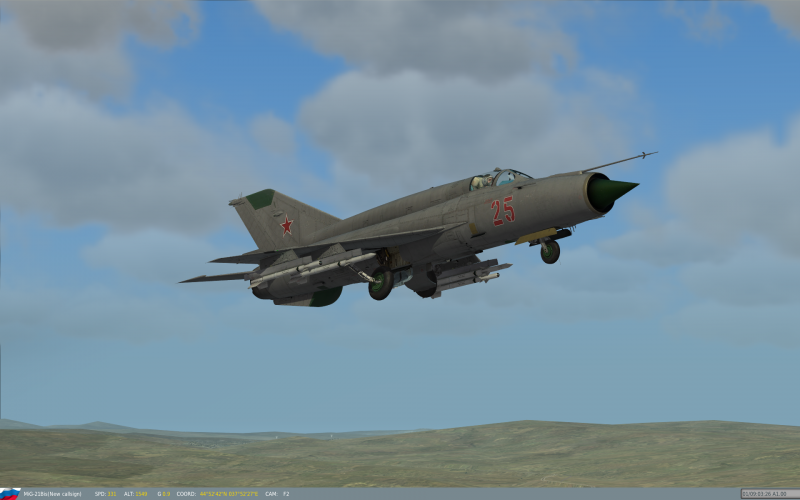 Watching the gear drop in their complicated but short little dance is mesmerizing – I could watch a looping .gif of it for hours. The flaps, gear, air brakes, stabilator, rudder, and afterburner nozzle are all animated. I had difficulty determining whether the shock cone actually moves in and out on the external model but would be surprised if it didn’t. 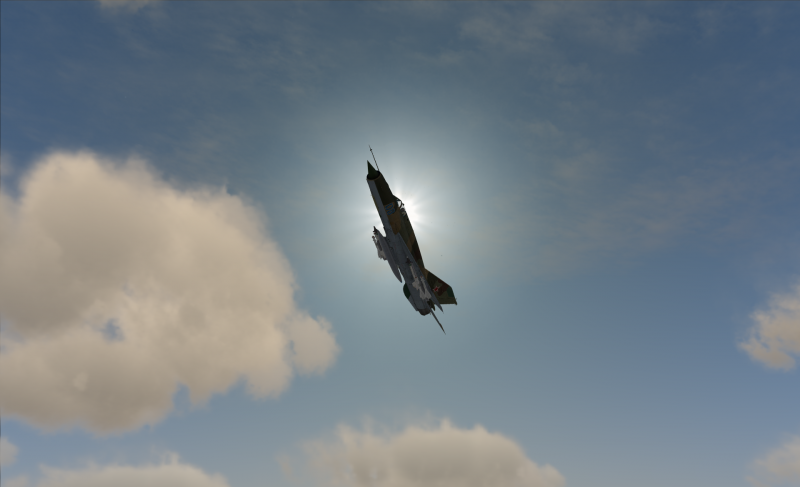 The MiG-21bis has a very distinctive look, instantly recognizable from just about every angle.

The released module will come with the following liveries:

I’ve also heard rumor of a bunny skin, but I’ll leave that as an exercise for the reader to find.