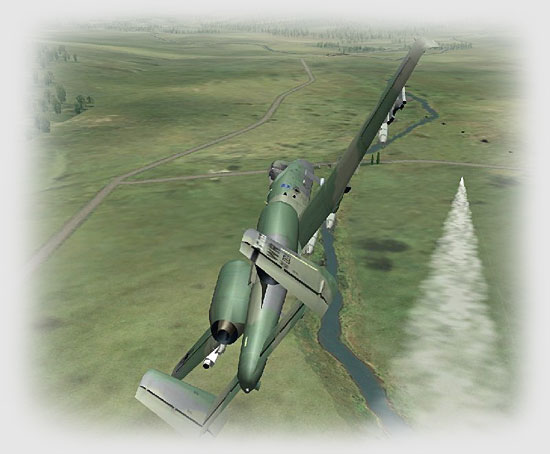 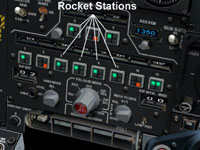 Select A2G by pressing the 7 key and then cycle the D key as needed to get Rockets to appear on the HUD. Check your cockpit weapons panel to confirm that your rocket stations are “greened up”

Fire the rockets with the spacebar or stick trigger. In the build that I am using, the weapons select panel does not seem to control the number of rockets fired. The longer I hold the trigger or spacebar down, the more rockets are fired. Perhaps this will be changed in the release version. Not a big deal for me… a half second of trigger pull gives me a good 6-10 rockets on the way… and that is good for a typical pass.

With the Maverick, we had pendulum effect to deal with. Not so with rockets… but we’re not out of the woods by a long shot. The HUD weapons mode for rockets is a CCIP pipper. This is a good news/bad news kind of a thing. Yes, you get a computed aiming symbol that can really take the guesswork out of shooting rockets… but… and this is important… the CCIP pipper brings with itself other issues. 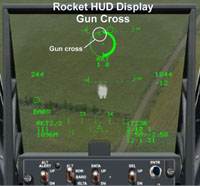 The main issue with the CCIP pipper is that you should avoid using it to maneuver with as you bring your nose to the target. The CCIP pipper responds to stick movement… pull g and the CCIP will move in the HUD… usually opposite the nose movement. You need a fixed maneuvering cue, not one that moves. That cue is the gun cross symbol. 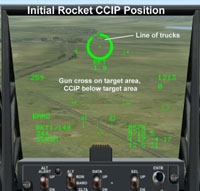 Now check your analog bar range. You want to shoot no further out than a 6 o’clock bar as a matter of technique (in high threat situations, you may disregard this advice!!). As the range analog bar reaches the 6 o’clock position. I’ll raise the nose slightly to position the CCIP pipper on the target… then I’ll make a positive effort to relax g. I want to shoot at one g. Not 1.1 g… one g! I use the “Track-Shoot-Track technique… I put the pipper on the target… I relax g to hold it there. As I squeeze the trigger (or press the spacebar), I again get real serious about holding the pipper on my aiming point. Only when all rockets are fired will I begin my pull out.

Why this emphasis on g?

Because rockets are super sensitive to launch g. They are supposed to be fired at or very close to one g. If you are pulling more than one g when you shoot, you will get a short impact due to “tip off” errors. Read the rockets section of my A2G article for more info on tip off. DO NOT PULL g WHEN YOU SHOOT ROCKETS!

Next point… DO NOT USE THE RUDDER WHEN FIRING ROCKETS! Why? Because tip off occurs with yaw as well as pitch changes. Keep off the rudder when making a rocket pass!

Here are the major considerations when shooting rockets: