Also added was complex engine management including the ability to fire up the APU and start (and shut down) the engines individually using multi-step procedures that are simple, but greatly enhance the feeling of realism when getting ready to fly. These changes are reflected in the engine/systems MFD page that allows you to see the status of the APU and engine throttle positions (OFF, IDLE, %, FLY). 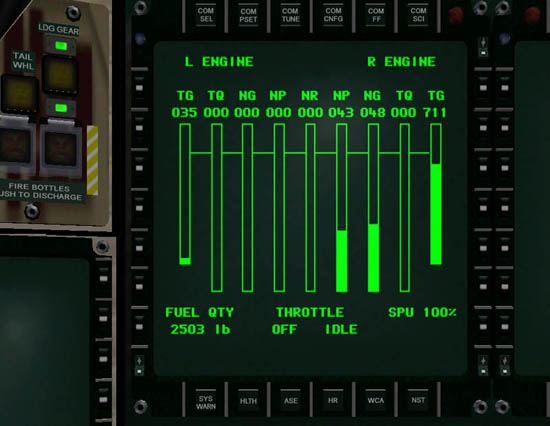 These are just a few examples of the many extensive improvements and additions the EECH modders have made to the original program. Obviously G2 had to decide on some final “version” of the modded EECH code to work with for their product, so I don’t fault them for not releasing a “bleeding edge” version. It is curious though that they disabled or removed certain features and additions that were originally included in the executable version they did use (version 1.6.1, compared to the most recently June released 1.8.5). Part of the reason may have been that adding some of the more advanced features would have also required writing additional documentation to add to the manual. Or it could be that the modifications to the graphics engine were incompatible with certain features. Who knows? It is worth noting that in our interview with the EE2 developersthere were encouraging signs that future modding would perhaps be allowed: “We are very happy to see so many people working to improve the game. We hope the community continues to do that and we will do everything we can to help them.”

There is no doubt that the graphics improvements of EE2 are significant. The self-shadowing, new 3D models, and detailed textures are fantastic. These improvements to the graphics engine do appear to require quite a bit more computing horsepower than EECH does. There are some perplexing issues with EE2 performance that I’m not able to really pin down despite spending hours entering and exiting the game, changing hardware and software settings, etc. What is clear is that EE2 has significantly lower frame rates (FPS) than even the heavily modded and texture improved EECH. I did a lot of testing in the Beirut area of the Lebanon map since that is one of the densest object scenery areas. What is really unusual is that I could more than double my FPS if I “Alt-Tabbed” out to desktop and then back into the game. I used both FRAPS and the in-game FPS counter (turned on via the “eech.ini” file) and they were in pretty close agreement. The following screenshot shows the FPS counter while sitting static under three different conditions: full cockpit view, full cockpit view after Alt-Tabbing, and the “no cockpit” view. As you can see the results are significantly different for the three different circumstances.

FPS performance is obviously affected by the number of objects on the screen (flat desert is less taxing than downtown cityscapes), the detail level set in your graphics settings (anti-aliasing levels, view distance levels, etc.), and definitely how much “action” is going on. Free-flight seems to have the best FPS, followed by skirmishes and then full-on campaigns. It makes sense that the additional calculations required to manage a campaign full of moving entities would have an effect on FPS. Overall the game is quite playable on my system at the highest detail settings in all cases. Another little quirk that is quite annoying however is the frequent “micro-stutter” than can occur on occasion. The very slight “pause” occurs at about 1 second intervals but the frustrating thing is that it doesn’t always happen. Again, I can’t pin it down to why it does it sometimes and it doesn’t at others. When it does happen the game is still playable and is very smooth, except for just the tiniest perception of a “hitch” in the scrolling of the terrain. It’s hard to describe because it doesn’t seem related to FPS and the movement of the helicopter doesn’t seem to be affected. It is frustrating though because EE2 is a gorgeous sim and the towns and terrains that are included are well done. 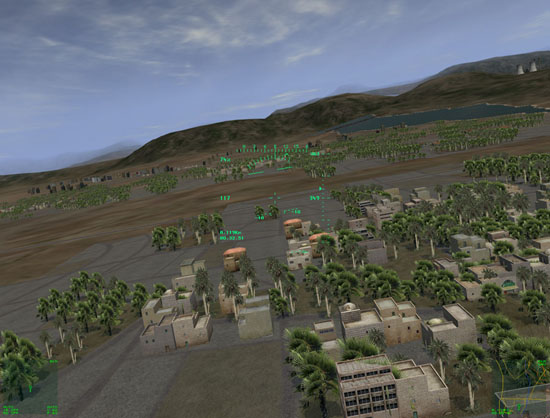 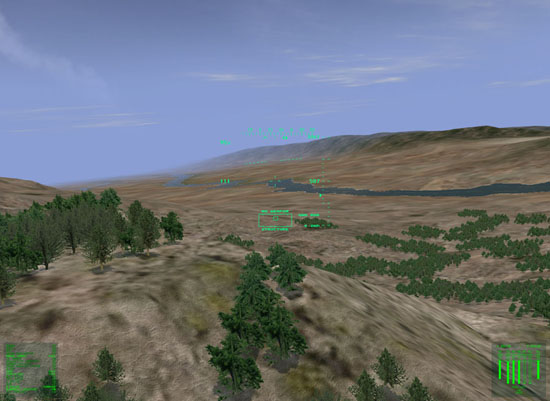 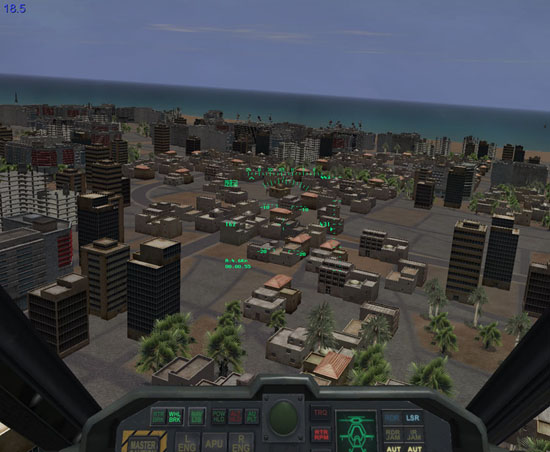 Here’s a video I created of Enemy Engaged 2 in action. You’ll need the DIVX plug-in to view the AVI. The file size is 13.1MB.

In Part 4, we will look at EE2 multiplayer and provide concluding remarks.

Note: For illustrative purposes some of the images in this article were cropped or marked on in order to highlight certain aspects of the software. All images were captured at 1280 x 1024 and were reduced in size and quality for bandwidth purposes.

If you missed any of the other reports in this review series,
you’ll find them here: Part 1, Part 2, Part 3, Part 4.