We’ve compared some of the 3D objects and compared some of the effects. Now let’s take a look at how the actual theaters look against each other. Again we can approach this from several different angles because of the range of users likely to play EE2: neophytes who never played the original or modified EECH, and those of us that have watched the development and breakthroughs of the dedicated modders over the years. I navigated to the exact same spot in both EECH and EE2 and tried to duplicate as best as I could the parameters (altitude & angle) of the following screenshots. The first is a typical urban area in the Lebanon map. You can see that EE2 adds much more vegetation and the trees consist of broad fronds instead of the sparse looking palms of EECH. While the number of buildings in each shot are similar there is a distinct hazing of the atmosphere in EECH that is probably a bit more realistic and tends to reduce the feeling of “pop-up” scenery. EE2 seems to texture the buildings out to a further distance though while EECH loads the textures at relatively close proximity as you fly.

In EECH you can experiment with the “eech.ini” file (more on that later) to increase the distance at which buildings are visible as well as their density, so there is a lot of variability that a user can tailor to their system. Changing the CBAR setting (a variable that effects how far out buildings are drawn) in the eech.ini file (it is still called “eech.ini” not “ee2.ini”) in EE2 did not appear to have an effect on draw distance. Further experiments with the eech.ini file indicate that some variables can be changed (i.e.: rotor downwash, display FPS, field of view, teleport, etc.) while changing others either has no effect or causes a CTD (TSD palette, CBAR, enemy color, high LOD hack, etc.). Indeed some of the parameters present in the more recently modded EECH don’t appear in the EE2 “eech.ini” file (i.e.: target camera monochrome green, restricted night vision FOV, etc.). 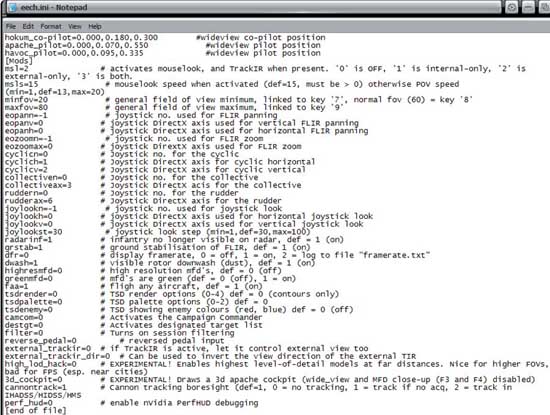 The next comparison shots show the port area looking north along the coast of Beirut. Once again you can see the hazing evident in EECH while EE2 seems to show its ability to show higher definition object textures at a farther distance. The ship models and textures are significantly improved in EE2, keeping with the “face-lift” theme that touches much of the sim. The shoreline textures are also nicely done with a less distinct boundary between land and sea via a foamy wave area. 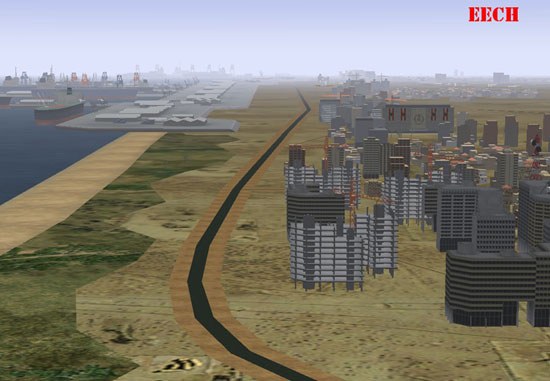 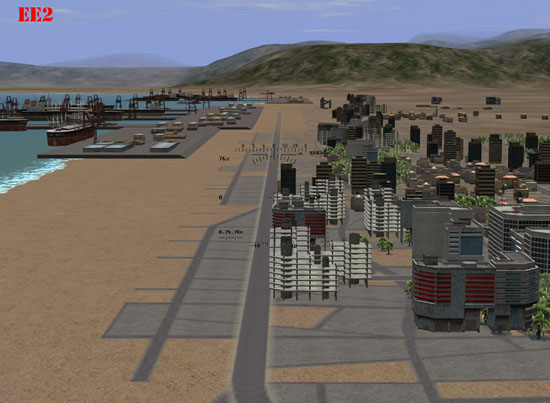