Level bombing is somewhat tricky in that release is just as the target goes out of sight. The approach is exactly the same, but our release point is when in the target travels down the vertical hash and goes just below the nose.

It never feels quite right and seems counter-intuitive, as we’re all used to seeing our target as we fire at it. However, we want Sir Newton firmly on our side and will just have to trust he’ll carry the day.

The reason it works is that the bomb will continue travel in the direction it is going and at the same speed of the airplane. However, gravity is going to pull it downward and the lack of thrust is going to slow it down: 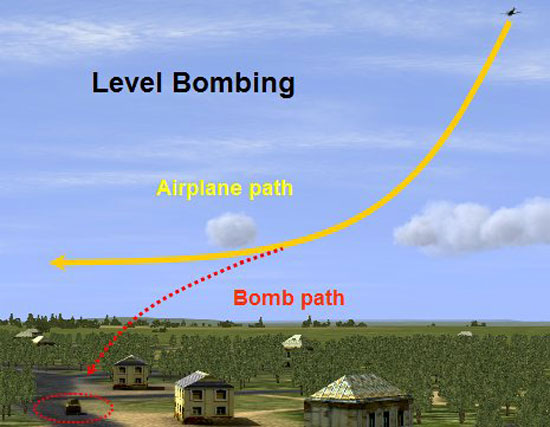 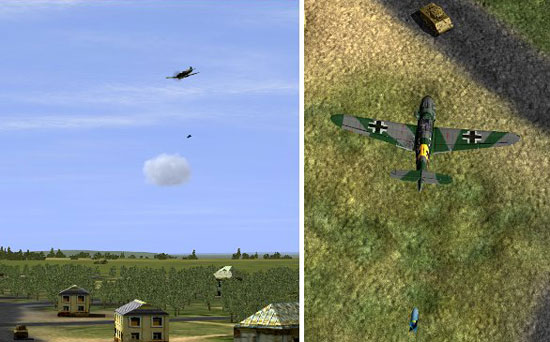 Often bombs will skip along the ground, particularly on roads, which is why we want to be straight and true to the target. We want the bomb bonking up against the treads or even nestling under the tank’s soft belly just before it explodes.

Level bombing requires the most practice and still has the greatest room for error regardless of technique. Fortunately, a close (ten meter) explosion is often enough to destroy even a heavy tank.

The last part of the Initial Line Up and the Aim and Strike portions of the attack run are the most dangerous. The plane is within effective range of the guns, is on a predictable course and so requires the least amount of adjustment to quadrant and deflection for the enemy gunner, and the pilot has no options for evasive maneuvers.