First comparison of the two Mustangs: cost. To fly the Accu-Sim P-51 version you need the base Microsoft FSX game platform. These days you can download the Gold Edition for about $30 USD. To that you need to add the A2A P-51 for $30 USD plus the Accu-Sim add-on for $25 USD. A total of $85 USD gets you what I regard to be the pinnacle of FSX Mustang simulation goodness.

By contrast, you can pick up the DCS World based DCS: P-51D Mustang for around $40 USD. No matter how you slice it, that makes the DCS offering a less expensive way to pick up a full simulation of the P-51D.

The A2A Accu-Sim P-51D is a minutely modeled sim, giving you incredibly realistic cockpit instrument control. Every button and knob in the Accu-Sim P-51 cockpit works, is clickable, mappable and adjustable. But Accu-Sim does much more than just bring your cockpit to life. It is a complete systems simulator, meaning that as you fly, it tracks in real time the state of all the aircraft systems (control surfaces, hydraulics, engine, cooling system, gear, etc.) and monitors and reports on their state. Your P-51D becomes a living, breathing machine. As you rack up the flight hours in your aircraft, systems will wear down, fluid levels will fall, mechanical systems will fail in a simulation of a “persistent world” as applied to a single aircraft. Your machine will need maintenance to stay in top condition. Fail to maintain it, and critical systems will fail in flight. Unlike an MMO, you don’t need to rack up “credits” to perform maintenance, it is just something you need to attend to, as with any real life aircraft!

The Accu-Sim P-51D functions as any other aircraft in FSX. So you can fly it in any of your FSX worlds or missions, which may include maps covering theatres in which the real P-51D was flown. Want to skim along the railway tracks through the countryside in Western Europe? If you have that regional scenery installed in FSX, you can! Or, if you want to fly out of the airport right near your home, and you have that scenery installed, you can buzz your own house in a Mustang. Look ma, no hands! 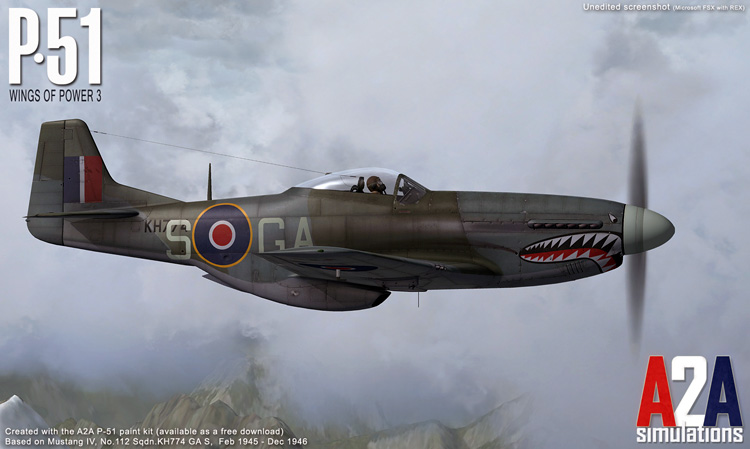 But as for doing what the P-51D was designed to do (blow stuff up), you can’t. Now, as you may know, Vertical Reality is to release VRS TacPack for FSX which may bring combat functionality to many of the FSX aircraft. According to the VR web site, “Weapons ranging from AGMs to LGBs and guns are all modeled with realistic physics, performance, effects and lethality envelopes rivaling stand-alone simulators. Not only will you be able to take out AI aircraft in single-player, you’ll be able to dogfight your friends (and enemies) multiplayer, take out SAM and AAA, or bomb a hostile airfield – all in free-flight. When the dust settles you’ll be able to call for a tanker, fuel up behind an AI refueler flying dynamic racetrack patterns, then RTB to review the action (and lick your wounds) via TacView – an ACMI playback system.“

Sound great? There is just one drawback, the VRS TacPack is neither fully released (product is now in open beta), nor tested with theAccu-Sim P-51D, so A2A devs will not vouch for whether it will work or not, as the SDK is currently not available to developers. If you are in the VRS TacPack beta and own the Accu-Sim P-51D, please comment in the SimHQ Article Feedback forum!

Both products minutely model the P-51D inside and out. While I found the cockpits to be faithfully rendered in both aircraft, the DCS cockpit has more functionality simply because it is designed to fly within a combat sim environment, so controls such as the “external stores” controls operate in the DCS: P-51D but are non functional in the Accu-Sim P-51D. 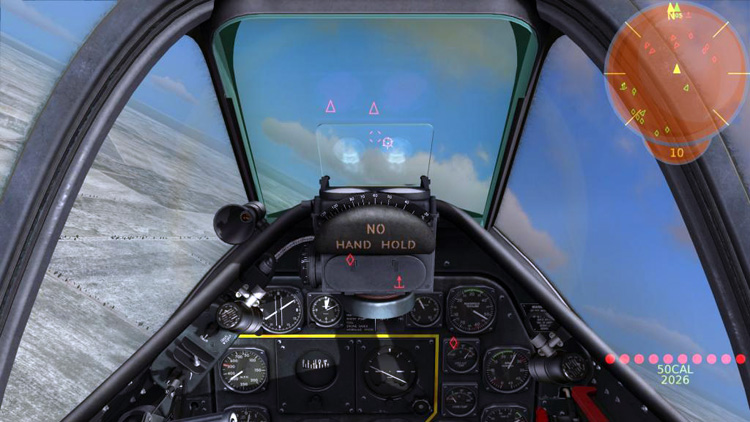 This deserves a mention, because the devs have put a lot of work into it. In addition to the wear and tear modeled in FSX planes, theDCS: P-51D also models combat damage.

Hundreds of aircraft systems and components are damageable, and the damage is reported in minute detail at the end of the mission. As an example, wheel fairing doors can be shot off or ripped off at over-speed conditions, engine wear or damage due to high manifold pressure at low RPM, overheating, and overuse of WEP has been implemented.Even tiny components like the radiator shutters’ thermo-sensors can be damaged in combat. 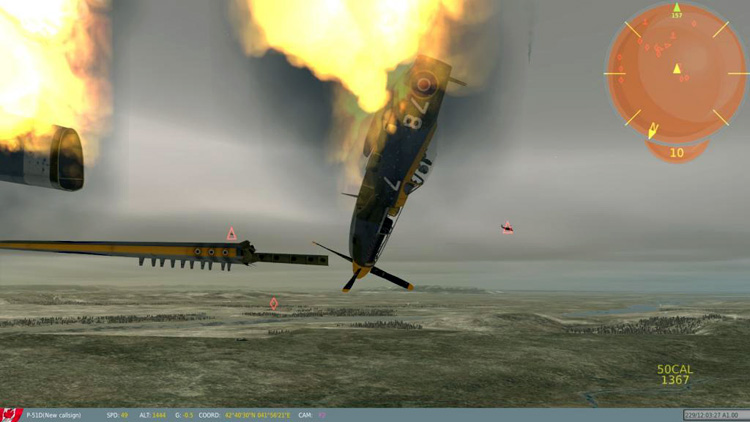 The DCS: P-51D Mustang’s engine has a beautiful low RPM growl and high RPM whine. I don’t know if DCS use the same source files as A2A (there are plenty of P-51D sound samples you can purchase for commercial use), but I put on headphones and ran back and forth between the two, without being able to say much except that the DCS flyby sounds better realized, while the in-cockpit sounds for the A2A Mustang have a more textured feeling, especially when starting, shutting down and taxiing.

Visually I can’t split the two Mustang sims. Graphics are always a matter of taste, and while I find the DCS: P-51D to benefit from some nicer lighting and in-cockpit shadows, the DCS World map is rather bare and featureless compared to the many gorgeous environments available in FSX these days.

Compare for yourself in these videos… 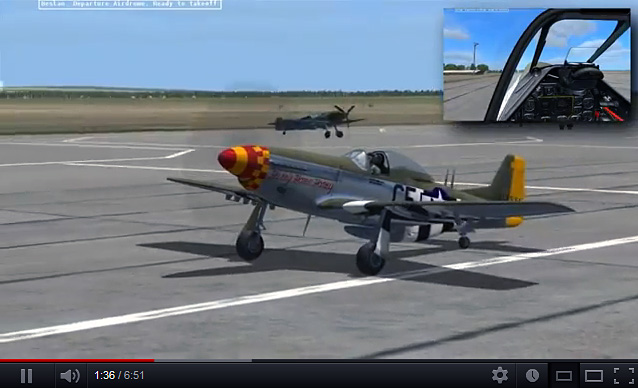 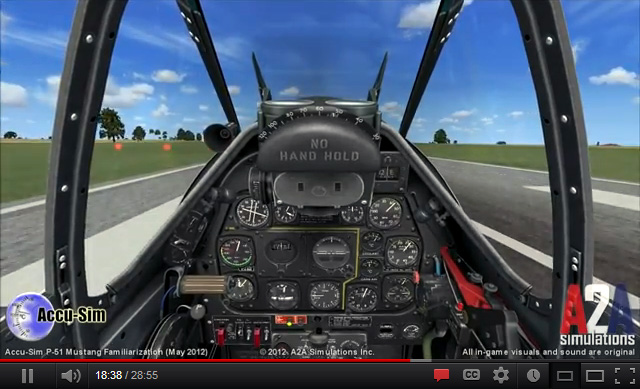 While I didn’t measure FPS differences, performance on my medium range gaming laptop (listed at the end of this review) is smooth in both sims even in clouds / bad weather / smoke flying.

Radio comms are extensively modeled in both sims. In the DCS release, whether between players, or AI wingmen, there is an extensive range of working commands and inquiries the player can draw on. “Easy” and “Realistic” comms are available as options, with color coding used to guide the player through a comms menu in “Easy” mode.

One bonus I enjoyed is that the player can land at friendly airfields, hit a command key, and get the ground crew to refuel and rearm you. You can also call on AWACS aircraft if they are available, or the air traffic controller, to get a vector to enemy targets, or your home field.

In a nutshell, the big differences (apart from price) are that while there is no “persistent state” systems simulation in the DCS: P-51D Mustang sim. You can fly it around just like the FSX version, with the added bonus of being able to blow stuff up in the DCS: P-51D. There is just one major drawback. You can only fly within the small DCS World map, which at the moment is limited to Georgia, Russia and Abkhazia. These are not the natural environment of this WWII warbird, and frankly I felt a lack of immersion zooming around shooting up the mountainous Russian landscape of DCS World and landing at airfields with names like Gudauta and Krymsk.

Once you’ve done this to your heart’s content, and had a look at the options for online flying (more on those in a moment), many pilots may find themselves with thoughts of upgrading to the Accu-Sim version, wallet permitting.

SimHQer “Lanzfeld113” summed up the pros and cons elegantly when he was comparing the DCS: P-51D Mustang and A2A Accu-Sim P-51 Mustangs:

“A2A Accu-Sim P-51 = GREAT system details and the globe to fly in. Persistent wear is GREAT but no weapons / combat damage…

So, the ultimate modern P-51D combat sim is yet to be born. You can go with DCS, take a smaller hit to your wallet, and live with a less fulfilling experience, or spend more and go with Accu-Sim P-51, get a much more detailed sim for your money, but still end up wishing you could fire the darned guns!