You will find this important since you will end up on the defensive. If you foolishly use all of your combined maneuvers offensively with no effect on the enemy you may find yourself helpless against him later in the turn. You will notice this quickly when you find yourself showing your tail to an enemy. It will become apparent when the enemy starts shooting and you have no way of shaking him off. 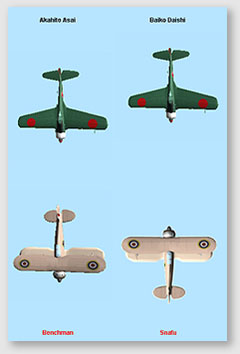 Countering the enemy’s actions while using your maneuvers in a way that the enemy cannot counter is the key to the game.

Each time you fly you gain experience. Experience is great, very important in fact but with that experience you add to the fatigue of your virtual pilot. The key to success is creating several pilots and rotating them through so that they gain the experience points needed to gain new aircraft and maneuvers. As you unlock aircraft you get to take on better enemy aircraft and skills.

The real fun is apparent when you try to pit your skills against online enemies. Your personas can stake their skills against some of the better pilots or go up against some newbies to gain some experience. For some unexplainable reason I couldn’t get into the lobby to play online. I have to give the folks at DVG thanks for all their work trying to get the thing working for me since I really wanted to play. Since I am the only one who can’t seem to get online with it there has to be some kind of configuration error on my side of the house.

To get an idea of how much fun an online game is, and how much better it is to play against real people, take a look here at The Wargamer’s after action report by a couple of Down in Flamesbeta players. 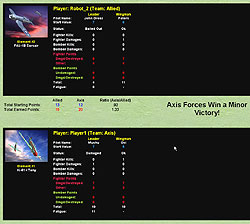 So what do I think of the game in its early manifestations? I find it very enjoyable. There are some things that I am sure grognards will complain about — most notably the lack of some USN aircraft — but overall the beta is pretty polished to this point. I do agree to some point that it would be nice to have the game like Dan Verssen’s original card game, with setups for early war, late war as well as Pacific and European conflicts. I would like to see some conflict with some of the aircraft that aren’t in the game now. I can see some people complaining that some of the best aircraft that were ever produced, like the F6F Hellcat and the Me 262, are not present in the game.

Those may be some legitimate gripes but that really shouldn’t limit the potential fun of the game. The whole concept has to be one of the more unique ideas brought forth to the computer. The idea of the game is less the great historical accuracy that people would want in a full blown flight simulator but rather the fun of playing a game that shows the abilities

This alone is what makes this potentially another hit for Battlefront. Battlefront caught lightning in a bottle the first time with the Combat Mission series and I personally think that they may catch it again with Down In Flames.

Down in Flames Page 2

Down in Flames Page 3

Piper Cub wheels, tires and hub. Used. For man cave display use only.
$50.0