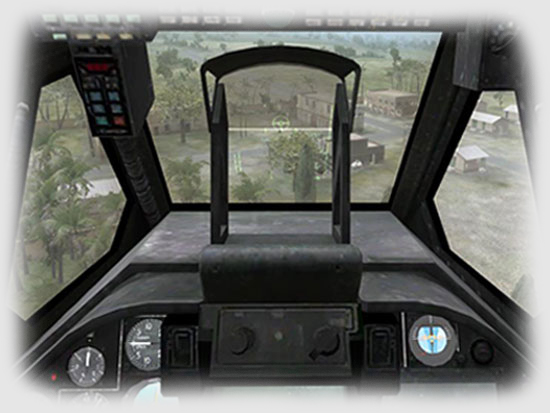 The interface is fantastic. As mentioned earlier, there are a lot of keys to remember, but that’s typical for this type of game. The start-up menus are well done. The in-game screen is clean and easy to read. As a leader, you control your men with your function keys, and then issue orders via a menu selection screen. If you’re an infantry man, then you’re on foot and usually in first person view just like any other tactical shooter. But you also have the option of moving to an over the shoulder third person view. If you’re in command, you have a third tactical view option that puts the camera even higher so you could see more of the battlefield and your men. Great for taking screenshots, but hard to battle in. All three views are easy to switch back and forth. Of course, you also have your iron sight view and / or your weapons optic sights view. This gives you the best image for sighting in and taking out targets.

If you’re in a vehicle, you can drive or ride from the cockpit view. You see all your gauges and drive like you’re in the truck, or armor vehicle. If you’re in an armor unit, then your field-of-view is small, and more realistic. You could also move to an over the shoulder view of your vehicle, and again take the tactical view. The interiors are not complete or realistic, but that’s not the purpose of this game.

It’s the same with the helicopters and aircraft in Armed Assault; you have the cockpit view, which is reasonably well done. But you also have the third person and tactical view. It isn’t easy flying in tactical view!

And big kudos to Bohemia Interactive for making Armed Assault the first tactical shooter to implement NaturalPoint’s TrackIR support. The TrackIR has been used quite successfully in flight sims and then race sims. It is a welcome edition in Armed Assault. Not only does it work with vehicles and aircraft, but it also works with your infantry unit. Sure, it takes some getting used to, but after a few hours it will seem “right”, and after a few days you’ll be glad to have it. As is the case in flight and racing sims, It allows a more natural, realistic game experience. For some reason it doesn’t work when in a tank. I would have liked to unbutton as the commander, and be able to look around the battlefield while we continued forward. Maybe in a future update? Take a lookhere (45MB) and here (47MB) at the two in-game videos I did using the TrackIR4 PRO in Armed Assault. Both files are zipped and in wmv format.

Joysticks are supported in Armed Assault, but in limited form. I don’t know if it can be adjusted, changed or added in the options, but do know that my twist stick don’t work the rudder as I had hoped, and I haven’t been able to get the throttle to work either as the throttle for the plane, or a cyclic for the helicopter. Would be nice to have better support for HOTAS and flight sticks.