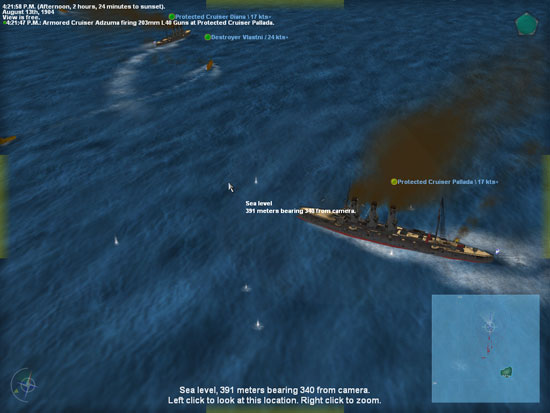 The game, in general, looks pretty good. I wouldn’t call the game a graphical marvel, but the ships rendered in the game are certainly above average in their detail and represent very similar models to the actual ships that fought during the period. The Capital ships in the game appear to be more exactly rendered but all of the ships that fought during the period were researched and recreated for the virtual battles. Zooming in on the ships shows some fairly good detail although not completely up to the level of some of the latest RTS games. The ships in the game are rendered properly and zooming in shows a level of detail to include crew members and smaller guns but they tend to look a little too clean. They tend to look more like the models of the ships you would see in the museum rather than real warships that have sailed for weeks and months at a time. 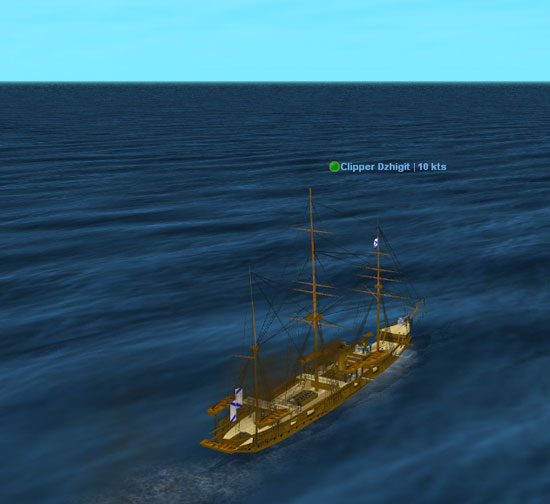 Weather effects occur in the game but there doesn’t appear to be much of a change in wave height. Technically this really is a minor problem since the game does model differences in fighting abilities and spotting abilities when the weather is bad but it would be cool to see these guys wallowing in some pretty good storms.

Ground effects are really generic. Land is generally represented as some kind of generic mass, similar to what you would have seen in Silent Hunter II. Towns are put in as buildings and have no specificity to what actual buildings were there at the time. This is fine as far as I am concerned, ports really are a minor aspect of this game and devoting too much time to building accurate looking ports really would be a waste of time.