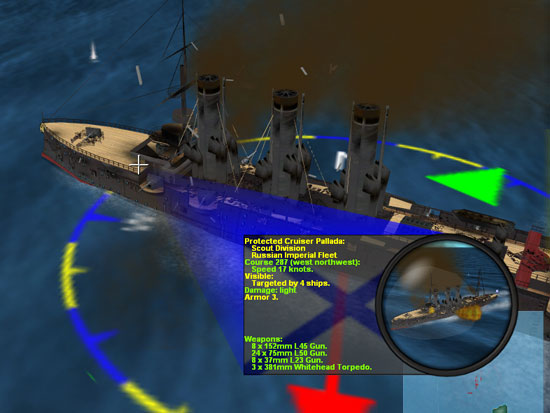 Probably the most contentious area of the game, at least from what I have read on the boards, is the in game interface. Some people really like it, some hate it, and most, like me, have found it OK after some getting used to. The interface in game does take some time to figure out but once it is done it isn’t that bad to play with.

Once you fire up the game and get past the opening splash screen, you come to a smartly designed front screen that has quotes from various sources and individuals that fought in the conflict as well as some pictures from the era. It is one of the better interface backdrops I have seen in a game. All the buttons to access the game’s features are on the right side of the screen. You have the option to play one of 13 historically based scenarios or have the computer generate a battle for you.

Computer generated battles can be as large or as small as you want but I didn’t see anywhere you can specify what ships are involved in these battles. In addition, there is no mission generator — something I would have liked to have seen in this game. It would be a nice add on later for those folks that have played all the scenarios and have done the campaign once or twice.

In addition the release version comes with the Grand Campaign, a full blown representation of the entire war starting from the beginning of hostilities until either one side or the other is defeated. More on this later.

The in game interface involves either a series of clicks or corresponding hot keys to make your warships perform certain maneuvers. One of the biggest problems early users of the game may have is figuring out how exactly to move around in the game world. Essentially players of the Combat Mission style of games will find the mouse movements around in the world to be similar. Moving your mouse to the side (in the yellow areas) will cause you to move left or right, forward or back. Outside of these areas cause the game to either rotate up and down or left to right on a pivot point. While technically simple it does get frustrating at times when you are trying to move quickly to a point only to fall off onto the rotation section, finding yourself upside down. Personally I think the yellow portions should have been larger, with the rotation sections only taking up a small corner in each side. That way there wouldn’t be any real trouble.

Clicking on a ship will select it, and possibly its task force. You can give your ships a variety of orders to include movements, firing orders, speed changes, and you can deselect ships and form new task forces for different missions. Making the ships change direction involves clicking on the lead ship, holding down the left mouse button and moving the line(s) to show which direction you want the warships to turn. After you let go, you right click to access a selection screen to order your ships to do various tasks like turn in a line, turn now, turn now and then regroup or to fall in behind the best ship going that direction. It also takes some getting used to and often you will find that you left click, get the direction you want and then screw up and forget to put the right order in at the right time and you have to do it all over again. It takes about six or seven missions before you really start to feel comfortable with moving all these little ships around. I highly recommend that you start out with one or two ship battles before you try some of the larger battles that ship with the game.

Just like in real life what you order a ship to do may not always be what it does. Ships will steer to avoid obstacles and will maneuver to avoid collisions. Ships won’t intentionally run aground in the game, I have tried it. They will try to get to your point in the best way possible without running aground.  Each ship has a maximum speed that is based upon historic records. As ships get damaged they tend to lose their max speed, get enough propulsion damage and you aren’t going anywhere.

In battle you have options to order the ships to fire freely (i.e. pick out the best target and attack it) or to concentrate on the closest ship. Warships can also be ordered to hold fire — although they sometimes don’t listen to your order. It is hard to hold fire when something is shooting at you I suppose. Each weapon has a maximum effective range and will fire at that range unless told not to do it. Weapons become more accurate the closer you get so conserving ammunition may be an important consideration. You may run out of ammo on that protected cruiser and find yourself low when you come up against more important prey.

Damage modeling in the game is somewhat esoteric. The game models the armor used in the games and calculates the potential damage to a system based upon the type of weapon that hits and the armor protecting an area. Damage can occur to propulsion, weapons, masts, searchlights, and steering systems on the ships. Fires and flooding are the ultimate enemies of these ships. Uncontrolled fires can rage and can cause detonation of magazines and ultimately the death of the ship. Flooding can be persistent or temporary and once it reaches beyond the capability of the ship’s pumping ability the ship will sink. Sinking ships will try to ground themselves and once sinking are beyond the control of the player. I have not seen any Glowworm type of suicide attacks in this game, ships won’t ram each other unless by accident. 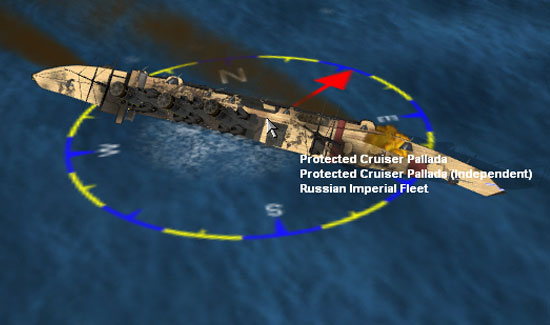