SimHQ included Futuremark’s 3DMark05 for examining the theoretical raster and shader performance characteristics of these graphics boards. The individual fill rate (multi-texturing) and pixel and vertex (complex) shader tests were ran at the program’s default resolution of 1024×768.

CrossFire exhibited very strong scaling in the three tests conducted in Futuremark’s synthetic suite. In fact, the performance increase showed a consistent scaling of basically 100% above the single-card results, a pattern that bodes well for the potential performance gains of software compatible with CrossFire’s profiled rendering modes.

Lock On: Flaming Cliffs was tested using the “SU-25T vs. two A-10” replay with the graphics settings at high (heat blrs off). 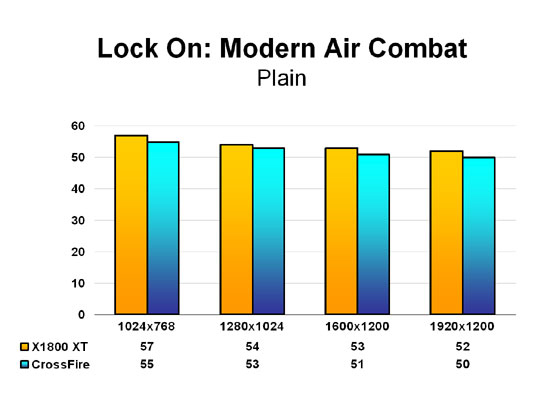 The above scores show that LOMAC has not yet been profiled by ATI’s driver team and that the application receives no performance gains from SuperTiling. In fact, there appears to be a small performance loss with CrossFire enabled, which could be a result of the PCI Express lanes being shared between the two graphics slots on the motherboard. The frame rate difference, however, is well within the margin of error. 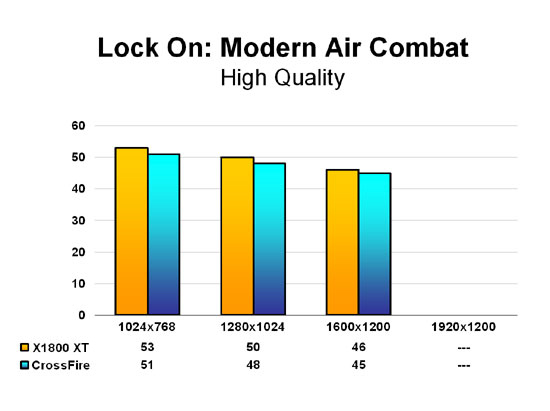 We again see CrossFire losing by a few frames to a single X1800 in each resolution. Cases such as this are a strong argument why ATI should allow end users to experiment with CrossFire’s rendering modes themselves. If, however, ATI maintains their current position then it is anyone’s guess when, or even if, titles such as LOMAC and its unofficial add-ons will be profiled by the company’s software team. However, it is worth noting that while CrossFire currently gives Flaming Cliffs no performance improvement the SuperAA modes can be used to improve the overall image quality of the simulation.

Pacific Fighters was run in OpenGL mode with all video options set to high (landscape at perfect) and tested using the “F4Utt” track. The conf.ini file was edited to enable the two non-4:3 ratio resolutions of 1280×1024 and 1920×1200. ATI boards perform better in IL-2 games in D3D mode, but SimHQ prefers to test with the landscape option set at perfect. 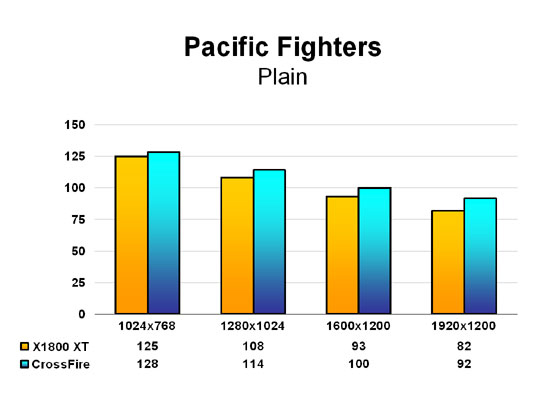 Tested in OpenGL, Pacific Fighters will therefore use CrossFire’s Scissor method as its default rendering mode. The title exhibits a performance increase for CrossFire, starting at a few frames difference at 1024×768 and increasing to a 10% advantage by 1920×1200. The title, however, is far from scaling as well as one should expect if it is benefitting from CrossFire’s second graphics board. 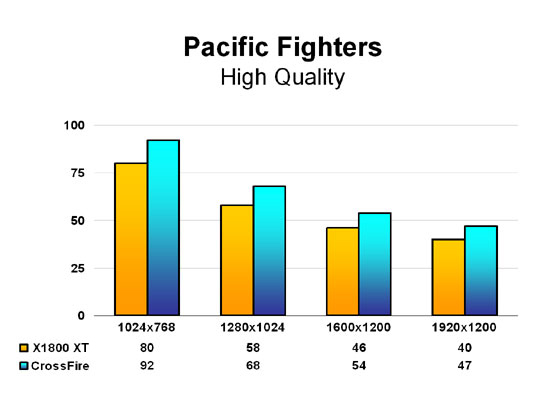 The marginal performance delta crosses over into the high quality tests as well, with the difference increasing from slightly over 10% at the lowest resolution to almost 20% at the highest. These scores actually left us somewhat puzzled, unable to reach a conclusion as to why the CrossFire results failed to scale with the addition of a second board as well as should be expected.