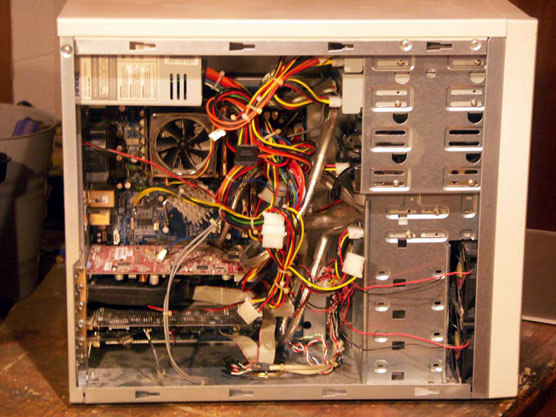 It’s a mess, isn’t it?  And it isn’t even the first machine I’ve built. I haven’t purchased a store-bought rig since 1999. It was a half-decent rig, but for next-generation software, it was a decidedly last-generation computer. My Socket 478 3.0GHz Pentium 4, 1GB of PC2700 of DDR, 128MB Radeon 9800 Pro, Audigy2, and Shuttle mobo weren’t cutting it anymore. I was tired of muddy-looking graphics on newer games. I had to endure a full two seconds of lag every time one of my AI teammates flash-banged a room in SWAT 4. It was time for change.

First, I had to figure out what I wanted in a new rig. Since I’d built my last one, a lot had happened that I had no experience at all in. What was PCI-Express?  It sounded like a new competitor to FedEx. Did it require a power connection?  Was it faster?  Would it deliver my packages on time?  Don’t get me started on dual-core processors. The way most of the people in our forums talked about them, I wasn’t sure if I needed to ask, “That thang got a hemi?”  Sweet.

I decided to go whole hog. The new machine would have a dual-core processor, a 256MB PCI-Express video card, 2GB of DDR, and a SATA hard drive. Whenever I build a new machine, new optical drives go without saying. I was also contemplating a new case. With that came a new power supply. After looking into the forums for help, I also discovered that PCI-Express motherboards require a 24-pin power supply. So that was needed, too. The only thing I was keeping was my Audigy2. Hanging on to older standards, I rationalized to myself, would be a bit like a Republican candidate asking President Gerald Ford for election advice.

My college-educated daughter and my wife also needed some upgrades as well, and it made sense that most of my old gear would eventually migrate into their machines, my wife’s for her business, my daughter’s…well, if her Sophomore Lit grades are any indication, I don’t know what she’s doing with it. My legacy machine, on the other hand, was in desperate need of retirement. It had chugged along since the latter half of the Clinton Administration and was beginning to show signs of decrepitude. A power supply would help, but when you have a motherboard that will only accept 384MB of SDRAM, there comes a point at which you have to say, “Oh, NO…she’s DEAD!  AAAUUGH!”

On top of that, the church needed a new computer. As the only computer-savvy person in the congregation (we’re a small, rural church), I was assigned the task of acquiring a new system. I immediately hatched a plan to hand down hardware until the church got a new machine. I presented this to my wife, “Look, dear. For all that money, you get a new machine, our daughter gets a new machine and the church gets one, too!” 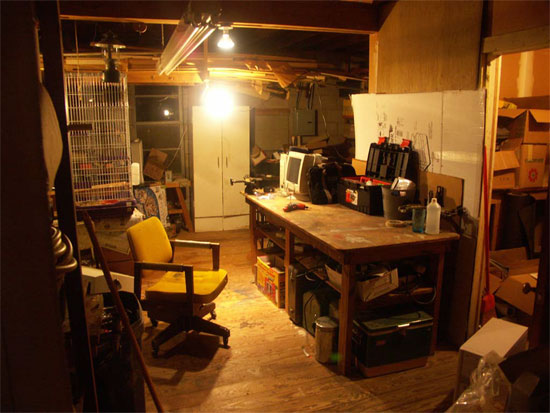 I prepared the shop, it was about to be the Shock-Trauma Ward for my home LAN.

Concentrating on the new machine first, I drove into the Metroplex, armed with a Fry’s Electronics sales ad. Interstate 35 going into town is becoming more and more of an exercise in survival. Darwinian theory at play in an SUV. Since the inception of concealed handgun licensing in Texas, it wouldn’t do you any good to wave a gun around to keep from getting cut off in traffic. The little old lady in the Caddy next to you probably has a howitzer under the passenger’s side seat. After negotiating through near-misses, I pulled in to the parking lot.

Let me tell you about Fry’s Electronics. It’s a combination of Wal-Mart, Best Buy, and Radio Shack all under one roof. And the roof’s a big one. The Fry’s Electronics on Matlock & I-20 in Arlington, Texas boasts more than 184,000 square feet of floor space and most of it is crammed to the gills with merchandise of just about every conceivable use. Where else can you buy an AMD dual-core processor, a 60-inch High-Definition TV, a four-slice toaster, and a washer/dryer set all in one building?  Maybe a symptom of rampant consumerism, maybe a sign of the Apocalypse, but you have to agree, it’s pretty darn cool.

The Fry’s staff is ever eager to help, but it’s kinda like shopping in the former Soviet Union during the Gorb’s time at the helm. This was particularly true for specialty items like memory, processors, and the like. You stand in one line to get a voucher for your item, you get in another to pay and collect it. Shop till you drop, indeed. However, their shelves are stocked with all kinds of stuff that no computer or electronics geek could possibly live without. The Austin, Texas location is even nicer, if you can get past the immense grand piano façade on the front of the store and the cashier with so many facial piercings she looks like she fell down a flight of stairs carrying a tackle box.

They had only one processor and motherboard combo left and it was one that someone had returned. They hadn’t even bothered to wipe off the thermal paste the previous buyer had put on it. This bothered me, but the “TESTED” sticker was on it and the ECS motherboard it came with, so I bagged it, along with a 256MB Radeon X800GTO, 2GB of DDR, an Antec 350W 24-pin PSU, a new copy of Windows XP, a bag of beef jerky and a bottled water. Those, and enough rebate receipts to account for at least one tree’s worth of old growth forest.

It took about a week before I decided that the AMD Athlon 64 X2 +3800 and the ECS motherboard that came for free with it weren’t going to work out. I drove back into town and gave it back without ever having used it. I used the resultant store credit to pick up the Abit motherboard I knew I’d need and a new flat-screen monitor. The ECS motherboard I’d first bought had one AGP slot, one PCI-E slot, and only two measly little PCI slots for expansion cards. With a USB expansion card, a WiFi card, and an Audigy2, I needed more room. I wasn’t about to go back to onboard sound, so I pondered my options. I decided that in order to get the most out of what I was doing, I wanted the next step up, the +4400 AMD dual-core. It might not be the fastest thing money could buy, but I didn’t want my next expenditure to be for a divorce attorney.

I would need more money, though. A lot more money.

This would not be good.