The accountant glared from behind her desk, her beautiful brown eyes flashing out the warning sign that all was not well with the news of the project having gone ‘over-budget”.

“A better processor, ma’am. The original deal didn’t work out. They sold me used items. They had to be returned, ma’am.”

“You didn’t think to check the boxes?” her tone suggesting that she was wondering which village was missing its idiot.

“I thought they’d work out, but it didn’t do what I needed.”

“How much do you need?” she sighed, knowing she’d have to acquiesce. Otherwise, she’d be dealing with a kicked puppy for weeks.

She exhaled, her patience stretched to the limit, “All right. But, I need you to do something for me.”

“Pick up a can of Piroulines for me. I’ve got a chocolate craving.” 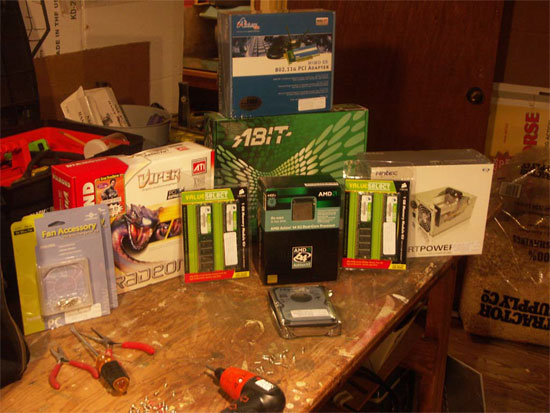 One thing I also wanted to try this go-around was a small attempt at case modding. Specifically, a window in the side panel. My reasoning was simple, if I was going to spend all this money on hardware, I wanted to make sure all the fans were turning. I didn’t want to wake up to a ruined processor. Actually, that’s a lie. I’m a guy and we’re attracted to bright objects, even if we’re the only people impressed by it. So, I scrounged around through my and my father-in-law’s copious amount of scrap material and turned up a 14”x14” square of ¼-inch Lucite and some green LED fans. I wanted at least one 120mm pusher centered right over the CPU. I had an ancient, beige Fudin ATX case that would be my test subject.

I began by carefully removing all of my previous components. They would eventually be used in other machines, so great caution was exercised. There’s a big debate over anti-static wristbands, do they work, or are they simply geek couture?  The short answer is, if you’re messing with more than a thousand dollars of valuable and delicate electronics, don’t take a chance. Use one. It could save your life. Actually, those of you closer to warmer coastal areas might not need to, but those in cooler or drier regions, you may want to invest in one as it’s easier to build up a static charge in those climates.

Unwrapping the new gear with all the care of a brain surgeon working on Anna Nicole Smith (there’s only so much to work with in either case), I gingerly laid the new gear in their places. I generally only use cordless screwdrivers on the case exteriors and fan installation, I prefer human-powered ones when installing motherboards and the like, I’m always afraid I’ll put a little too much compression on the wrong screw and snap a circuit board like a vanilla wafer.

Hard drives should be handled like eggs. There needs to be some sort of airflow over them as well. You can elect to use a hard drive cooler or place them in the direct airflow from your case fans, but your hard drive is the heart of your machine and you should treat it as such.

Like the anti-static wristband, there’s also a debate on whether or not heatspreaders on your system memory work, or if they just look cool. Every other build I’ve done, I’ve put copper heatspreaders on my DDR modules, but this time I decided to let them breathe free. I can’t tell a performance difference and they can really be a pain in the butt if they’re installed just one millimeter out of place.

CPU cooling fans range from brute force airflow/sheer utility to looking like something a woman would see at the gynecologist. There’s a raging argument over aluminum vs. copper cored, which cools better. Considering that the heat conductivities of either are nearly indistinguishable, the actual performance of both is essentially similar. However, copper, when it heats up, has more ‘give’. It has the ability to come more in contact with the item it’s attempting to cool, where cast aluminum is less able to do this.

Also, aluminum almost immediately after coming in contact with oxygen in the air makes a thin layer of aluminum oxide (a very hard substance found on most grinding wheels), this keeps the chip from coming into intimate contact with the heatsink. Copper will do this too, but to a lesser degree, which is why so many houses that used aluminum electrical wire caught fire when its use first came on the scene. The aluminum oxide would hinder the electrical current, it would promptly heat up and catch the house on fire. Watch for ATX-compatible fire extinguisher equipment to make the market eventually.

One nice thing AMD did was including a copper-cored heatsink with copper heatpipes within the louvres of the heatsink itself. For a stock fan, it’s fairly robust and really all you need to properly cool your AMD processor. By comparison, I’d like to know what Intel is shipping with theirs.

I then installed the case fans and power supply. I decided to try something new. Previously, I had a lot of problems with excessive noise from my rig. Specifically, it sounded like a Weed Eater hitting a metal T-post. Vantec offers some very nifty noise abatement products. I used vibration dampener gaskets on my case fans and PSU, drastically reducing the amount of sound my machine makes. Before, when I turned off my old machine, my wife used to say the silence was deafening. After building the new rig, my old case is now very quiet and the cost of these little devices has more than paid for itself.