All aspects of the CH Products HOTAS System have been covered earlier in this article.

The G940 is the only HOTAS system to come with backlit pushbuttons in the throttle base. It was anticipated that Logitech would provide a means of controlling these lights directly beyond their tech-demo-like program that currently exists.

In an ideal world every developer of a new sim would support these lights natively. That would mean that the light state and color (green or red) would automatically be synced with the sim. So far titles are lacking native support, including the recently-released DCS: A-10C Warthog public beta which seems to have every cool feature under the sun, but there are a few notable examples of good third-party support, such as FSX and DCS: Black Shark. In the words of Logitech, “The LEDs have significant potential and we continue to work with developers for more support.”

Logitech’s Gaming Software v5.09 also allows force feedback settings to be assigned to individual profiles, which means application-specific settings can be used. An included firmware update also improves centering and reduces center play. Additionally, Logitech is working on another update of the firmware to further increase the precision of the joystick.

In the meantime, Logitech recently released Logitech Gaming Software v7.00. Although it doesn’t support the G940, this application combines the former functions of the Logitech G-Series Key Profiler (used to program buttons on Logitech Gaming Keyboards) and the Logitech LCD Manager (used to program the LCDs contained in Logitech Gaming Keyboards). LGS v7 allows keyboard keys to be programmed to start default Windows programs, execute any application shortcut, type out text strings, and of course execute simple keystroke assignments. This new software is a good step in the right direction for Logitech. First, eliminating two programs and combining all of their functions into one helps get rid of the “taskbar full of Logitech” that one can encounter when owning multiple types of Logitech products. Second, any improvement in keystroke macro programming is a beneficial improvement that will hopefully be carried over for use in HOTAS programming. 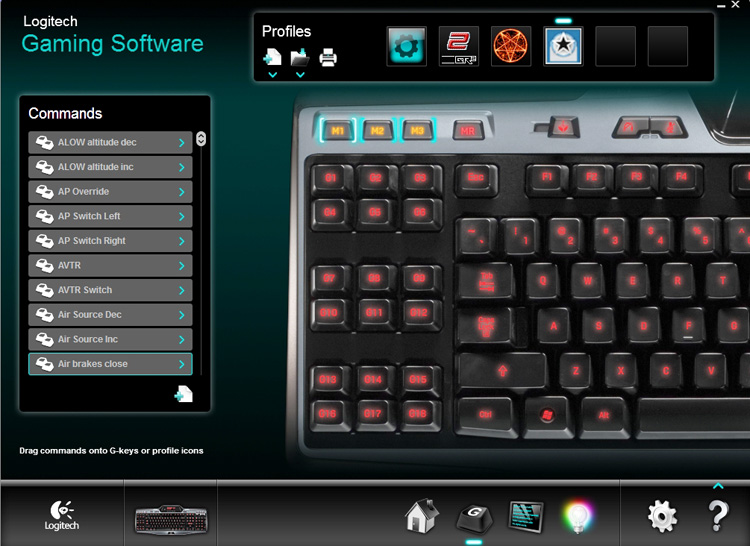 All aspects of the Saitek X-52 have been covered earlier in this article.

As reported in the SimHQ Review of the X-65F, the product does not have a means to calibrate the axes. Saitek has recently released beta drivers that will allow axis recentering, although they are currently lacking other features. SimHQ will continue to follow this issue and report on developments.

Thrustmaster has stopped manufacturing new Cougars, since the WARTHOG is Thrustmaster’s new flagship product. Expect new Cougar stock to become scarce in the next few months, if that matters to you.

All aspects of the HOTAS WARTHOG have been covered earlier in this article.

SimHQ asked each of the four HOTAS manufacturers for a publishable quotation regarding the future of their HOTAS software.

“We are looking into an increased feature set and expanding the Control Manager to cover more devices.”

“On December 6, Logitech released Logitech Gaming Software 7, which supports our gaming keyboards and game boards. It integrates the GamePanel LCD and G-Key programming into one program for easier use and functionality. LGS 7 has a higher level of programmability, macros and scripting support than 5.09. This software does not currently support G940 or other game controllers, but it shows the future direction for the software moving forward. Logitech does not comment on future releases of product or software.”

Saitek was contacted via email for a comment but did not respond.

“Thrustmaster is working on all aspects of T.A.R.G.E.T., which is a continuous development process that takes place over time. There are various things we’re currently improving like the Windows environment implementation (shortcut, resize…), but we are also finalizing functionalities such as the support of AxeMap1 mode under the GUI and the automatic layout printer. We’re also completing some GUI features regarding macro files. This will lead to T.A.R.G.E.T. Release Candidate 3.0. in late December.

T.A.R.G.E.T will evolve with time, and we’re also adding some special modes for the script, allowing the opportunity to program Thrustmaster controllers that are excluded from the virtual device. Then, a deeper evolution involving driver evolution such as LED management will lead to T.A.R.G.E.T. 1.0 in early 2011.

We want to give to all kinds of user the best programming tools step-by-step. Therefore T.A.R.G.E.T will enlarge to integrate more Thrustmaster products and features over the years.”

It is clear that there is no one HOTAS that has software that makes it overtly more capable than any other. However, the available products sort themselves into two categories. The CH Fighterstick and CH Pro Throttle, the Thrustmaster HOTAS Cougar, and theThrustmaster HOTAS WARTHOG are HOTAS systems with powerful programming capabilities that allow the user to do almost anything one might wish, either before starting up a sim or once the action has begun. Furthermore, the throttle hardware and associated software from Thrustmaster allow an effortless matching of the physical throttle detent position with appropriate corresponding electrical response. T.A.R.G.E.T. overall is the most capable HOTAS programming software out there, but while it is full of impressive features, its glaring lack of ability to create more than one virtual controller is something that CH Control Manager can surpass easily.

In contrast, software applications for the Logitech Flight System G940, the Saitek X-52 Pro Flight, and the Saitek X-65F Pro Flight also generally lack many of the more advanced features of the other two manufacturers, and once a sim is started the axis properties of these controllers by-and-large cannot be modified. Since throttle axis linearity and physical-vs.-electrical response for these products cannot be modified while maintaining a fixed bottom point, throttle detents for these products seem to be merely a marketing bullet point, and if anything they are more of a hindrance than a help when actually flying most sims.

The Logitech Flight System G940 is further hampered by software that was designed for simpler controllers and has been adapted just enough for use on a multi-axis, multi-mode HOTAS. The fact that the Logitech Gaming Software help file shows an inexpensive Logitech Force 3D joystick with the “advanced” programming to make the stick write “hi” in Windows Notepad speaks volumes about the extra effort Logitech has made to develop suitable software for this product. The fact that the Logitech Flight System G940 reports as three separate devices, with no existing method of combining axes into a custom single controller, is also a big blow to users of older or less-featured titles.

Although this article is a discussion of HOTAS hardware only, it is worth mentioning the fact that CH Products and Thrustmaster have made the effort to develop software that unifies different types and capabilities of hardware. For example, Control Manager supports four different CH yoke models, three different joystick models, a throttle, a throttle quadrant, pedals, the MFP customizable keypad, and an industrial trackball mouse. T.A.R.G.E.T. supports the HOTAS Cougar (joystick, throttle, and any connected pedals), the HOTAS WARTHOG joystick, the HOTAS WARTHOG throttle, the T.16000M joystick, and the MFD Cougar Pack. Either of these two programs can combine axes and buttons from multiple devices and present them on a single virtual controller. Conversely, the Logitech Gaming Software cannot do this, and in addition Logitech product programming is further divided; LGS is used for wheels and joysticks, while mice, keyboards, and headsets with programmable buttons all have their own unique software. The end result presented by Logitech is a disjointed system less capable than any other high-end HOTAS manufacturer, despite the fact that the new LGS v7.00 is a step in the right direction.

However, programming capabilities are only one part of the whole story. Hardware capabilities play a big part in HOTAS preference, and in this realm each product from the four manufacturers is rather different.

CH Products has a sliding (not rotating) throttle and their HOTAS components can be purchased as individual items.

The HOTAS Cougar accepts gameport rudders, has adjustable throttle detents, and is metal. Arguably, its internal construction is not as durable as the CH Products HOTAS based on the CH Fighterstick and CH Pro Throttle.

The HOTAS WARTHOG does not come with rudders, but arguably has the smoothest and most precise stick and throttle on the market.

The X-52 Pro Flight has a display in the throttle base, an adjustable grip, lighted buttons, and sells for significantly less than any of the other products.

The X-65F Pro Flight comes with Pro Flight panel controls and is the only manufacturer-produced force-sensing HOTAS.

If you’ve ever wondered how the major HOTAS programmability options stack up, now you know. There is no HOTAS with everything, nor do we even all agree on what the perfect HOTAS would be (mine would be a force feedback, all-metal, split-throttle with lots of rotaries, 18-axis, adjustable grip, adjustable tension device with swappable sticks and a hybrid of the T.A.R.G.E.T. / Control Manager interface — in other words, elements of the HOTAS systems discussed here plus some features that none of them have).

For now, flight simulation enthusiasts are lucky to have multiple manufacturers producing quality HOTAS devices for our entertainment enjoyment.