Ever since Elite: Dangerous went to Kickstarter in 2012, fans have been asking for the ability to land on, and explore, planets. With the announcement of Elite Dangerous: Horizons fans will be getting just such a feature, along with another full season of major gameplay expansions.

The Planetary Landings expansion will only include airless, rocky, procedurally generated worlds to start. On top of that, the assets developed for planetary creation (including the creation of the planets themselves) are “using the proper scientific processes, from first principles, in terms of how the solar system was formed… You get rocks forming first, when planetesimals stick together, then liquid forming on the surface.” Frontier Developments is promising players that they’ll…

…be able to fly over the surface in low orbit and choose your spot to land, you’ll be able to venture out in your Surface Recon Vehicle and hurtle across the surface at high speed. You’ll be able to sneak around or go in all guns blazing. The nimble SRV is tiny compared to your ship, and is virtually invisible on a long range scanner – ship-based weapons will find it very hard to hold a lock on them, but airborne and ground-based players can explore the same worlds together, so watch the skies! 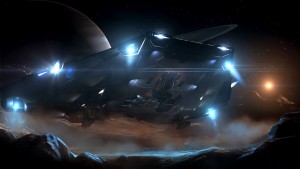 From a technical standpoint, Planetary Landings represents a large leap. The planets we’ll be able to visit are reported to be huge, planet-sized sandbox environments that will have, among other unannounced points of interest: Surface starports, crashed ships, mineral deposits, and hidden bases. Planets will also obey some common sense exploration rules, such as the presence volcanos strongly suggesting a mineral rich planet.

The introduction of Planetary Landings will bring with it new types of missions in which players scan planets and moons from orbit and then chose whether or not to land and explore. If you make the decision to go suborbital, you’ll be greeted with a seemless transition from space to atmosphere to open skies to hard ground – no loading screens. Planetary gravity also promises to change the flight model of your ship, making you adjust to, and relearn, how to fly in suborbital conditions. From there, players will be free to “swoop through canyons and skim mountain-tops.” 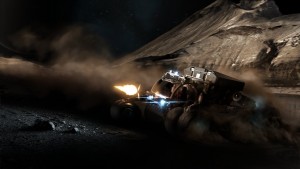 Of course, your ship isn’t equipped for total planetary exploration. To remedy that, Frontier Developments is introducing the first SRV (Surface Recon Vehicle) – the Scarab. This sturdy, tough terrain trooper comes with new mechanics and features native to ground exploration, such as thrusters to jump gulleys, as well as to do the reverse and help pin you to the ground in low gravity environments. Let’s just hope it controls better than the Mako from the original Mass Effect.

Other than the headline features, the new season will continue to give players more content and updates to the core game. While these new additions haven’t been talked about much, Frontier Developments has mentioned that missions, player roles, and galaxy events are definitely three of the areas in which we can expect some improvements. While some of these updates will be for the entire community, they have said that some will be aimed at only Horizon owners (and by extension, Lifetimers). Speaking of Lifetimers, due to popular demand, the lifetime expansion pass is back on the Elite store for a very limited time – if you’ve got the desire and extra cash laying around.

While info on the smaller updates is scarce, the guys at Frontier did hint that a new loot and crafting system is coming early 2016 in the first season update of the year, which promises to “transform the gameplay experience.”