Frontier Developments released Elite: Dangerous, their popular and ever growing space sim, at a very opportune time. At the end of 2014, hype for Star Citizen and the still enigmatic No Man’s Sky had a lot of gamers anxious to take to the stars and explore. Enter Elite: Dangerous, the next addition to the Elite series which had been in development since 2009. With all the space hype, suddenly there was this beautiful game that seemed to fill the void which Star Citizen and No Man’s Sky had been creating for the past couple years. Even better, Elite: Dangerous wasn’t just a cash grab hoping to take space enthusiasts money. Instead, players got to jump into the newest entry in the Elite franchise knowing that Frontier Developments had big plans for the game in the coming months and years.

Fast forward to the latter half of 2015 and ED was still doing pretty well for itself, with a steady stream of updates and content patches. In August of last year players were treated to the happy announcement of a new, big expansion called Horizons, with some truly exciting new features. However, there was one rather large caveat: Horizons was being marketed as a stand-alone expansion. Meaning that existing players would have to re-buy the game in order to get access to the new content. Predictably, the move by Frontier angered a lot of fans, and that anger was further exacerbated by the fact that the announcement came mere weeks after Steam’s famous summer sale had ended. This meant that a lot of new players had bought the game on sale only to discover that, in a handful of months, they’d have to re-buy the game to get access to the newest expansion. Granted, Frontier did offer a “Loyalty” discount to owners of the original game, but even that move was harshly criticized by fans. Using the word “Loyalty” discount while underhandedly abusing your customers isn’t exactly praise worthy. The move was undeniably shady, and regardless of how much you might enjoy ED, it’s really hard to forget about those kinds of business practices.

That said, it seems Frontier Developments is attempting to mend the fences they’ve broken. Late last week the developer announced they were about to fix the Steam store confusion by essentially doing what should have been done in the first place:

To reduce confusion, Horizons will be added as a season pass DLC for Elite Dangerous, rather than an individual product. It’s a relatively small change but it means that on steam and on our store there will now be three options

The deluxe bundle will include the base game, Horizons season pass DLC and some digital goods

This kind of setup looks way more familiar, doesn’t it? Elite Dangerous is now considered the base game, which it is necessary to own in order to utilize the Season Pass (Horizons). The Deluxe Edition, as you’d expect, includes the base game, as well as Horizons. 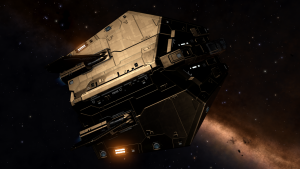 If you’ve already bought Horizons, prior to the change, Frontier Developments tossed out a gold paint job for the Asp Explorer, as well as access to the Cobra Mk IV which was an original bonus. I’m not sure the gold paint job really does much in the way of apologizing for the fiasco considering it will eventually be released to all players –effectively neutralizing it as a status symbol.

I, and the greater gaming community in general, understand that developers like Frontier Developments don’t operate on the same level as Activision Blizzard, Ubisoft, and EA. We understand that games cost money to make and that money has to come from somewhere. In fact, as crowd sourcing has shown over the past few years, we’re all very willing to give money to these small developers who deliver quality content. All Frontier Developments had to do was announce the new expansion (before the Steam sale), explaining that the expansion would be slightly more expensive due to its scope in comparison to the size of the studio. Of course, there would still have been plenty of fans upset at the expensive expansion. Of course, it would have caused drama and a bit of backlash. However, after the dust settled, no one would have been able to accuse Frontier of shady business practices. Short-term drama is always preferable to long-term black marks on a company’s reputation.

All of that said, it is, somewhat, commendable that Frontier Developments fixed the problem last week. It’s hard to overlook the fact that it took almost two months to do it but better late than never, eh?

So what’s in store for the game’s future?

Despite the recent months’ drama ED is still moving forward, if with a little less momentum, into its 2016 release schedule. Indeed, there are some things here to be pretty excited about:

Everything changes. Introducing an expanded mission system and game-changing loot. Craft exotic weapons and modules for your spacecraft and build a ship unlike any other.

Take what comes and strike back with double. Bring a second ship to every combat encounter with Ship-Launched Fighters and defend your passengers against the deadliest threats in the galaxy.

Team up and stand together. Forge your own identity with the new Commander Creator, then share your bridge with Multi-Crew and fly with friends.

A secret to be revealed in Elite Dangerous: Horizons’ final expansion! 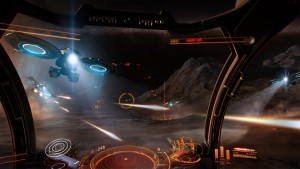 [UPDATE:] The information above, which I’ve kept here so people can see my mistake and I can rectify it, is a complete misreading on my part. I’m happy to say that Elite Dangerous will be continuing after 2.4 and that the “final expansion” is the final expansion for Horizons, not the game in general. I apologize for the confusion. Thanks Cast_Iron_Nephilim and komemiute!

As for the first major update this year, 2.1 Engineers, Frontier will be focusing on mission gameplay and creating more compelling content that will spur on player interaction. In short, they’re going to be focusing on five goals: Personalization, Progression, Variety, Consequences, and Rewards.

Frontier is looking to make missions more meaningful by adding recognizable NPC’s, which maintain a level of persistence in their interactions with the player. These interactions can be colored by the players ranking and reputation with the minor factions –meaning, lowly NPC’s will possibly respect you, while unfriendly NPC’s may be a handful to deal with.

Details are still a little sketchy on 2.1’s finer points, but there’s sure to be more to come as the month progresses.

Discuss Elite Dangerous and more over on our forums!