The year may quickly be coming to a close, but Frontier Developments is still warping forward with Elite: Dangerous’ development. November is shaping up to be an exciting month for ED, as two new beta releases have been announced, with each bringing a substantial amount of content to the game.  Starting sometime next week, the 1.5 “Ships” beta will be released, raising the ship count from 20 to over 30, and then, starting November 23rd, the planetary landings beta will begin. Of course, the planetary landings beta is part of the next expansion – Horizons.

Among the various locations you’ll come across while visiting planets in the Horizons expansion, settlements and ground ports are some of the more robust. Ranging from small outposts to much larger station-type locations, each area provides new gameplay content and experiences for solo and multiplayer players. Ports behave much like starports, with each having its own economy, dependent on the planet type, and there have also been new economy types added to the game that are native to surface ports. Similar to orbital ports, you can grab missions which will require you to visit other locations to complete objectives. As you’d expect, surface ports will also have their own unique mission variants which are restricted to surface locations. 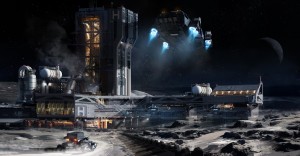 Naturally, with the addition of new surface locations coming to ED, Frontier Developments has also added in new commodities and resources which will be available on the surface areas. These new resources can be gathered from various Points of Interest on each planet. Points of Interest consist of: …”military bases, research establishments, hideouts, starports, mining complexes, crashed ships and debris to investigate, and perhaps a few other things too.”

There is essentially a scale of items on the surface from starports and settlements, down to interesting mineral finds. Points of interest cover the encounters at the lower end of that scale, so as you travel across the surface you have a chance of encountering one of these points. The nature of the encounter will vary depending on where you are, the type of planet and the local topography and geology.

In general, Points of Interest are broken into two categories: Natural and Constructed. Gathering resources and using them is all going to be part of the Looting and Crafting system, which we’ll, hopefully, get our first glimpse of in January 2016. However, aspects of the system will be implemented during the planetary landings beta on November 23rd. 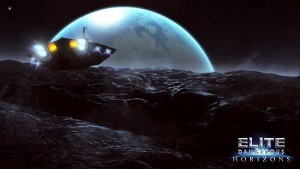 Surface installations are going to be quite a bit bigger, and offer more variety when it comes to approaching missions than previously seen in ED. While some worlds may hold no manmade structures on their surfaces others may be home to lawless or militant factions. Breaking the laws in these areas is going to present some exciting obstacles and mission types for players. For instance, maybe you need to get into a room guarded by turrets but don’t want to go weapons free? No problem. Go and see if you can find a nearby data link to hack, and turn the pesky turrets off (and possibly the lighting for that section of the base, too).

There’s a chance that you might come across an area protected with armaments able to cut you down instantly at some of these locations. In these scenarios, it’s probably going to be best to jump into the new SRV an out maneuver the defenses. However, smaller scale protection (turrets and skimmers) will still bring the pain to your SRV. This kind of variety is going to make gameplay on the surface of planets interesting, especially when you bring along some friends for multi-vectored approaches.

The end of the year (and future) is looking bright for Elite: Dangerous. This new season of updates is promising to greatly expand on the content and gameplay opportunities in the game. Being able to, eventually, hop out of your ship and control your own avatar, in both space and surface instances, is going to give the game an entirely new feel. Head on over to the forums and let us know which aspect of Horizons you’re most excited to experience!