The main menu screen is a source of seemingly endless controversy. Opinions are split between the original “hangar” menu and the “new” museum menu. 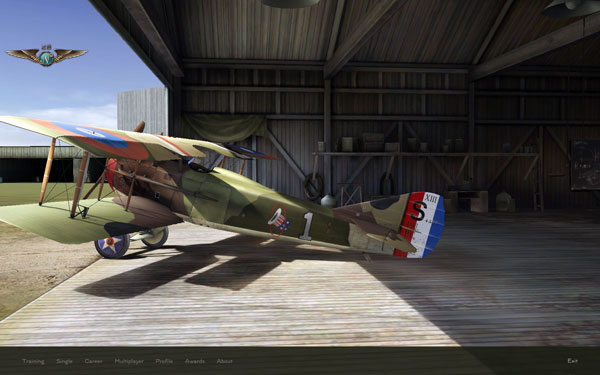 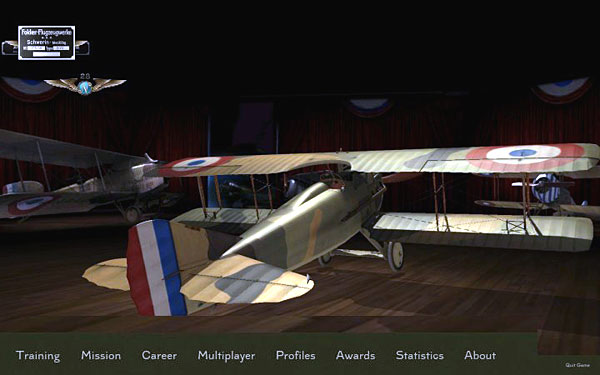 Now lets go through the various menu sections in Rise of Flight.

The training missions are okay, with a pretty good job of covering the basics of flight and providing a decent tutorial for the simulation. The films that start each section are well put together and entertaining in the some of the language in the scripts. I must confess that I passed up on them beyond the first one, as I prefer to just learn in a trial and error fashion in quick missions.

Here one will find all the stand-alone single player missions, including community made ones.

The missions break down into three major categories: Free Fly, Scenarios, and Community Made.

There are actually three types of missions in Free Fly, with others nested under them: 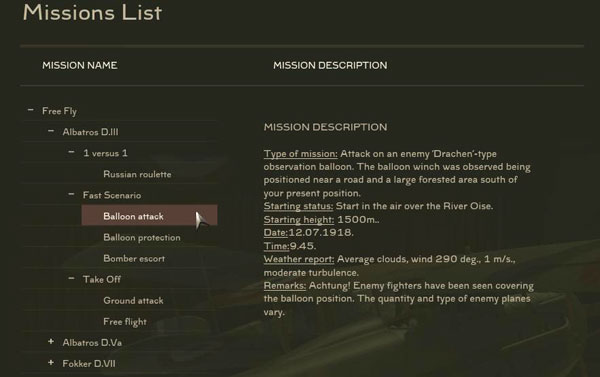 Every plane has the same set of standard missions, which vary only by the planes one will come up against (except in the “Russian roulette” mission, where one will fight against the entire rotation of flyable and AI aircraft, including ones on the player’s side!). Selecting a mission will populate the briefing in the description area.

One of the ways neoqb “suggests” that one purchases planes that are available is to show you everything in the flyable inventory. So even if one hasn’t purchased the Albatross D.III, it will be selectable, only to dun the player by reminding them they aren’t allowed to use it.

Each of the Free Fly missions has variable triggers, meaning that one will encounter different types and numbers of planes in each one. The Balloon attack is my favorite, and the variability of flights and types makes it an excellent melee mission.

These are the RoF equivalent of crack cocaine missions; they are quick highs that become very, very addictive in a short amount of time, and I find myself trying a different strategy every time I fire them up.

The problem with the single player missions is obvious, though — there are really only six of them, replicated for each flyable. There’s some wash-wash that happened as well, with the Nieuport 17 balloon attack mission starting one in the clouds. The tiniest of testing of that mission would have revealed that, and a small tweak would have fixed it.

neoqb has placed unique missions for each flyable in this area, a departure from the cookie-cutter “Free Fly” area above it.

Each is a demonstration of the strengths of the simulation, whether in triggering, the featured aircraft’s best tactical situation, or the simulation’s engine itself. The Nieuport 17’s scenario, for example, is best described as a weather and trigger demonstration. The mission itself is simple: fly to a tented area nearby, land, wait to be cleared for take-off, and return. However, it’s in a rainstorm with very short visibility and the whole thing has to be done in twenty minutes.

I’ve opened up the selection in a few planes in this picture to show the variety: 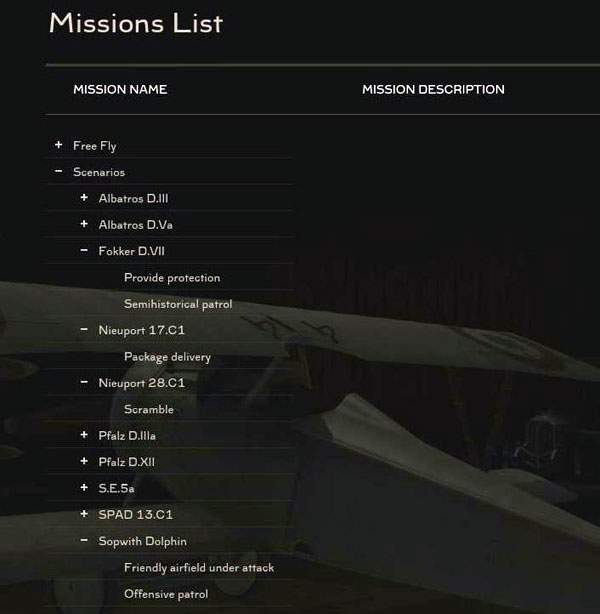 Again, even if one hasn’t purchased a plane as flyable it will still show in the menu and only refuse a player at the start of a mission.

The scenario missions give a tantalizing look at what the community will be able to come up with once they decipher the Full Mission Builder.

The Community made missions are listed individually at the bottom; as you can see, I have three downloaded. 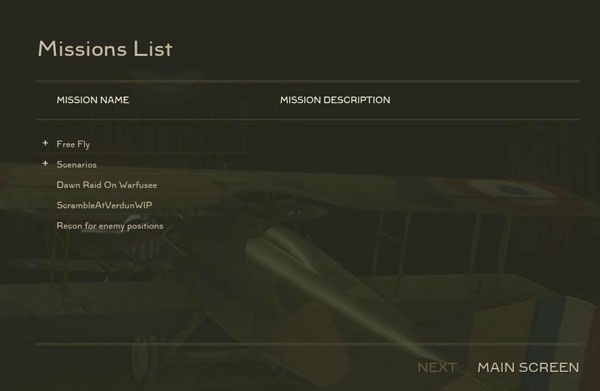 Looking in the mission tree screenshot, there are three missions stuck down at the bottom, listed by title. Those are single missions made by, well, the community. All three can be found in the SimHQ Rise of Flight Mission Builder sub-forum and downloaded.

“Laser” made a “Quick (‘n’Dirty) Dogfight Generator” that can setup dogfight missions in… well… a quick and dirty way.

The fact that we’re seeing the first trickles of community content is highly encouraging. neoqb has taken the latest path of least resistance in mission content by developers with the sadly common “slap the mission builder on the DVD and make the customer provide content!” with the unfortunate obstacle of including a very complex (and powerful) editor that really needs a manual to understand. Well, there is a 165-page manual, but for now it is only available in Russian.

The Million Dollar Question: Will the community be able to learn the Full Mission Builder and start making quality missions and campaigns before the stock ones become stale and the sim goes idle on the hard drive?