In our new series of articles we’ll be looking at some budget titles that will give you a lot of bang for your buck. Older sims, overlooked, overshadowed, or just plain under-marketed, some of the sims we’ll feature are worth a second look, and fortunately you’ll be able to find some of these titles in bargain bins at giveaway prices.

I’m a helo junkie. I admit it. As a fixed-wing puke I always look with grudging envy at the helicopter pilots at our hospital as they climb into their sleek crafts and depart our ramp straight up and head out to accident scenes. The dynamic nature of helicopter flight and the variety of missions they are able to accomplish is truly remarkable. Fortunately, helo sims have been well represented over the years, so there must be a lot of us out there that enjoy the challenge of helicopter operations. Going back over a decade with the 1997 release of the original “Search and Rescue”, the small developer Interactive Vision has repeatedly updated their franchise with new iterations of their sims including: Search and Rescue 2, SAR 3, SAR 4: Coastal Heroes, and Search and Rescue: Vietnam Med-Evac. Each new version included new types of missions and took advantage of new graphics hardware. Never quite pushing the boundaries of graphics or gameplay the series had its fans, but since the sims focused more on precision flying and not combat action they were largely overlooked by mainstream simulation fans.

At some point in early 2003 the series was bought out by Activision Value and the developers moved away from the “Search and Rescue” theme of the previous titles and added combat capabilities centered around the AH-64 Apache. With the addition of guns, missiles, rockets, and an enemy that fired back, a fun and challenging “lite” helo combat sim was born. While the combat missions and helicopter systems are not terribly realistic, under the surface there exists a fine and fun simulator that will provide many hours of challenging and entertaining flying. The combat series started with Apache Air Assault and was followed a year later in 2004 with Apache Longbow Assault. 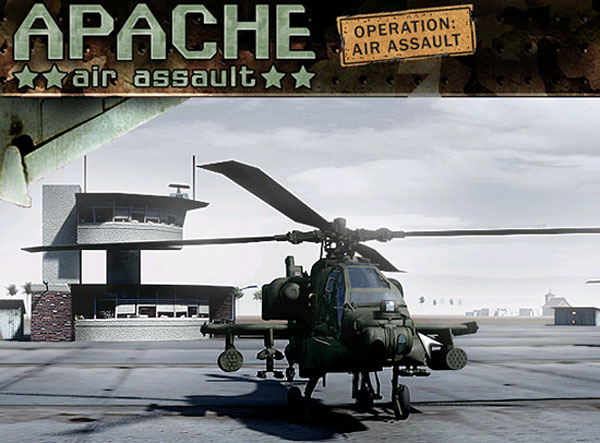 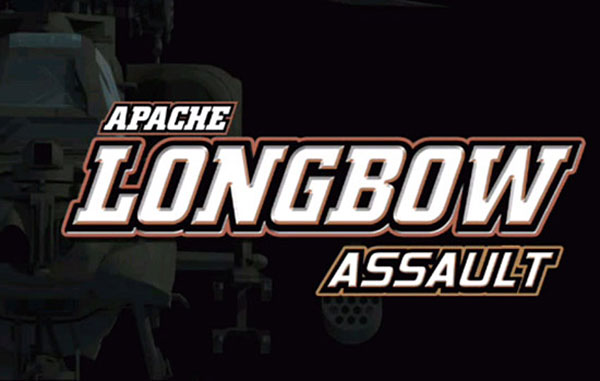 Both titles feature the AH-64 Apache, and each consists of 30 single missions that are somewhat linked by a storyline campaign. The missions range from ridiculously simple to frustratingly challenging. Depending on which version you’re flying weapons consist of the 20mm chain gun, Hellfire missiles, Hydra rockets, Zuni rockets, and Sidewinder missiles. Only later in the campaign in Apache Air Assaultwill you gain access to the devastating Zuni rockets which make quick work of enemy compounds. Apache Longbow Assault added air-to-air capability and you’ll find the enemy Havoc helicopters will be your most formidable foe on the battlefield. Missions in both titles range from search & destroy, convoy escort, precision strike & recon, RESCAP, anti-ship, SEAD, and many others. Generally the missions in the later title (Apache Longbow Assault) seem to be more complex and diverse. 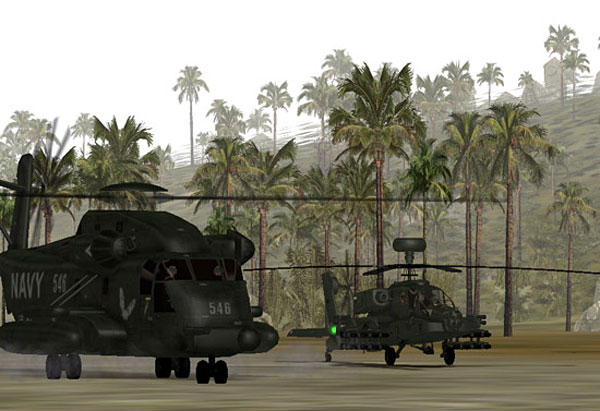 Graphics are quite good with atmospheric and lighting effects that can hold their own against current titles, and actually far outshine older more nostalgically loved helo sims like Longbow 2 and EECH. Explosions, smoke effects, flares, and terrain graphics are well done and the moodiness obtained with the clouds, rain, thunderstorms, and turbulence all combine to provide a fun and challenging environment to fly in. Theater dimensions are somewhat limited but varied. Again, Apache Longbow Assault has a bit more diversity with winter terrain, forests, mountains, and even island locales. 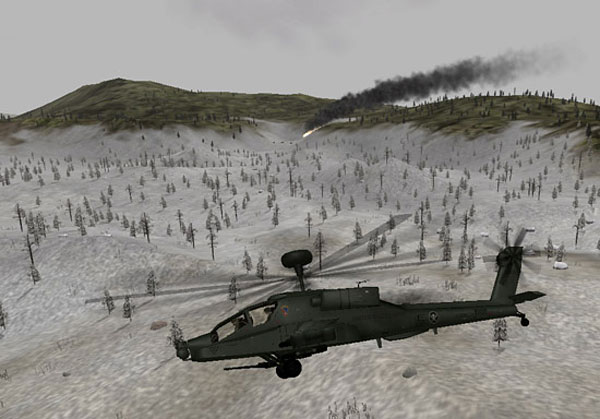 Cockpits are not very functional, providing a bit of frame of reference but little more. There are gauges, lights, moving maps and other features, but for the most part you’ll be referencing the HUD symbology to provide flight, navigation, and targeting data. Both titles feature different cockpits but there is a good bit of commonality between the sims. It is possible to use TrackIR™ technology with the virtual cockpits if you use the mouse-look mode and you can even use TrackIR to target the 20mm cannon to provide true “look and shoot” capability much like the TADS targeting system of the real Apache. External views are great including spot plane view, tail-mounted camera view, fly-by, and overhead views. It would have been nice to have a target and weapon view included. 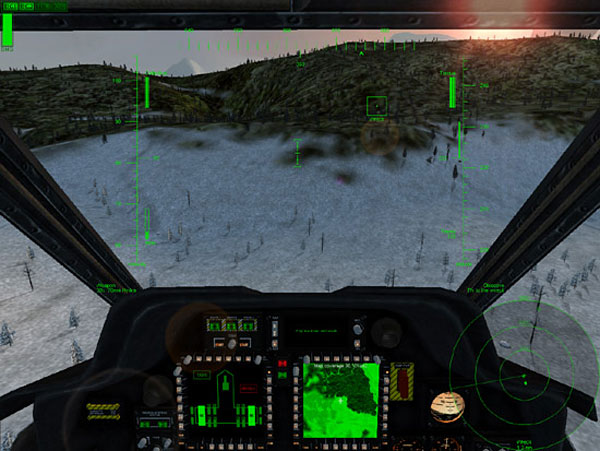 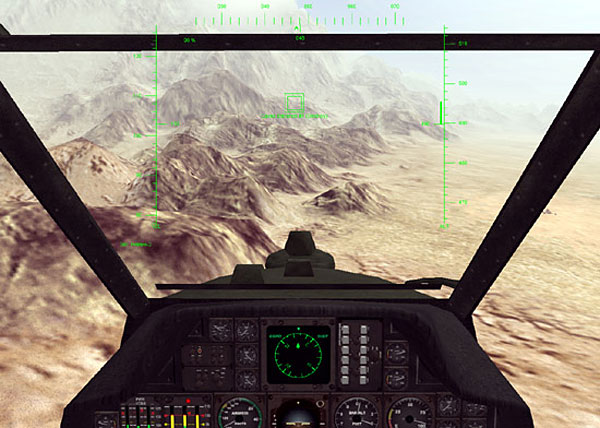 The highlight of both titles is the fantastic flight modeling that the helicopters exhibit. While the flight models don’t seem to include things like retreating blade stall or vortex ring state, the actual feel of flight is very fluid and dynamic. I’d say the overall feeling is better than both Longbow 2 and EECH but not as good as Black Shark. Anti-torque forces on the tail are a bit under-modeled, but loss of the tail rotor results in the degradation of tail rotor control unless enough forward motion is maintained to allow aerodynamic forces on the fuselage to have a self-aligning effect. Translational lift does appear to be modeled and loss of an engine will teach you a lot about maintaining rotor RPM and operating on the margins of a helicopter’s lift ability. 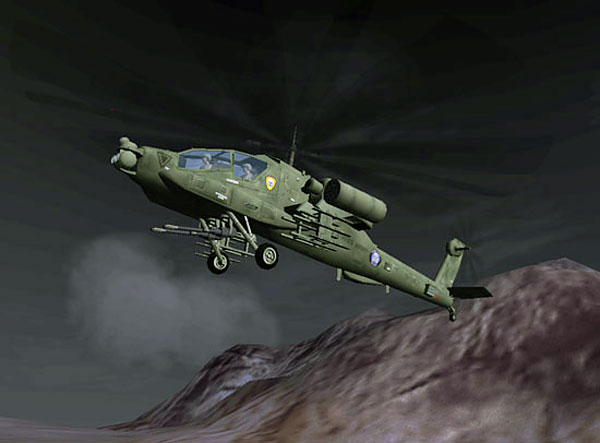 Enemy units include infantry, anti-aircraft emplacements, SAM sites, armored vehicles (BRDMs, BMPs, tanks, APCs), jeeps, trucks, helicopters, bunkers, gunboats, missile boats, and other threats. Missions range from straight forward “attack armor column here” to multiple target missions and escort roles. Rarely will fuel be a factor, but often careful attention has to be paid to how and what you use your ordnance against. Bypassing targets that are not immediate threats in order to accomplish the primary and secondary missions is often needed since rearming is not featured. Wasting missiles on targets that can be destroyed with canon rounds will lose you valuable stand-off range and perhaps prevent you from accomplishing the mission. Your Apache is quite resilient, but suffer a couple RPG hits and small arms fire and you’ll soon start losing systems, engines, and rotors. 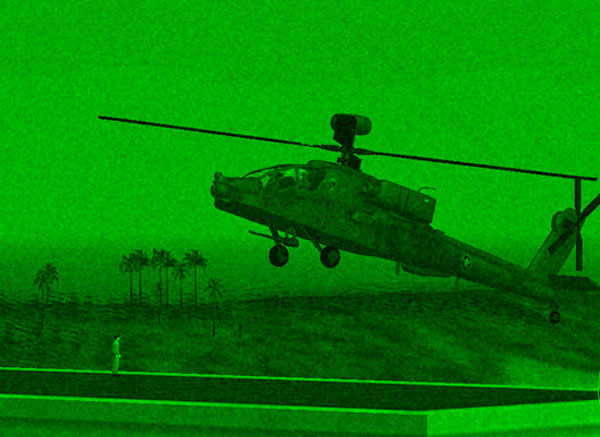 Overall both titles are worthy of a look and should provide hours of fun. It is a shame that neither game includes multi-player capability since there would be some fun in pairing up with a teammate to tackle some of the missions. A quick scan of the internet shows bothApache Air Assault and Apache Longbow Assault are at bargain basement prices of as little as $3.00 on some of the popular auction sites to an average of $10 for brand new packaged CDs. For those looking for some cheap thrills the price can’t be beat. 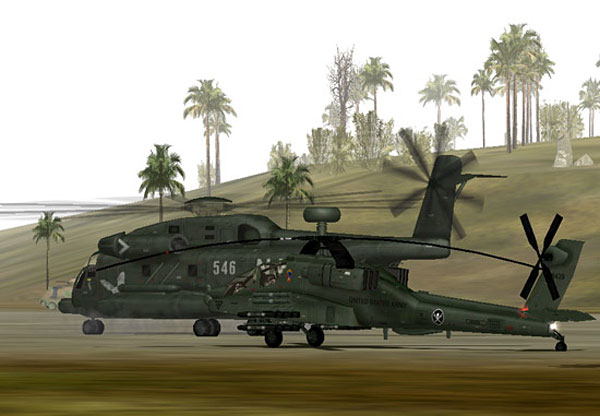 Check out this 9-minute video featuring gameplay from both Apache Air Assault and Apache Longbow Assault.