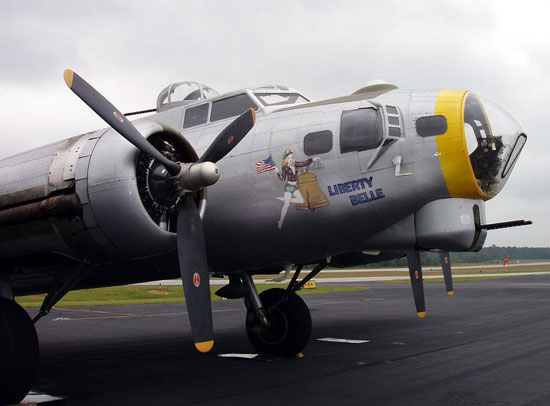 October 12th, 2005. On this date something very special happened for my son and I and a few other fine gentleman. On this date what many would consider a dream came true. Now a lot of folks on this site and the forums here and elsewhere know me fairly well. I have never hidden my passion for aviation from anyone. It’s not a secret that my love of aircraft and being in the sky is an all consuming thing. I live it, breathe it, and speak it. I find all things even remotely related to the topic wildly addicting. So, when the opportunity to hitch a ride in one of the most recognizable military aircraft of all time fell into my lap, the result was predictable. I became like a little child, who on Christmas day, can’t wipe the surprise and happiness off their face. SimHQ needed someone in the Atlanta area to go check out a B-17 and maybe even go for a ride! I jumped at the chance!

After many schedule snafu’s and contact difficulties, I was put in touch with Ray Fowler. Ray is one of the Pilots for the B-17G “Liberty Belle” and a true renaissance man when it comes to aviation. I found out over the course of discussions that Ray was a pilot for the airline I work for and lived up on the north side of Atlanta. Unfortunately due to the vagaries of the airline industry he was furloughed from Delta a few years back. He had plenty to do though. He was recently hired by Continental as a 737 First Officer and spends his free time flying around in World War two vintage aircraft and bombers with the Liberty Foundation. Ray has been very involved with the restoration of the Foundation’s B-17G “Liberty Belle” which was faithfully and lovingly restored to flying condition last winter and this spring. 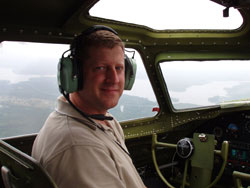 Ray also is a member of the Alabama Air National Guard and flies the F-16 on weekends out at Montgomery, Alabama. It’s really obvious when you get talking to Ray about airplanes that he is a kindred soul. His eyes light up and he starts talking fast and recounting stories of past aviation experiences. After talking for just a few minutes I knew I was in for a special treat.

I had been in touch with Ray since July, and due to his busy schedule and mine it had started to look like the opportunity to see the aircraft and maybe go for a short hop might slip by. July gave way to August and as the autumn approached I feared I might miss this golden opportunity. The aircraft was really busy with air shows and events around the country. During early October, Peachtree City, Georgia has an Air show each year. Wings Over Dixie is not one of the “big” air shows but it is a fun day to go out and look at airplanes, see them in the bright, clear, fall sky, and smell the aroma of hot dogs and hamburgers out on the ramp. Air shows are great gatherings of those strange folk who can’t seem to get enough of watching things in the sky, especially when it includes beautiful vintage aircraft dancing as if in a ballet among the clouds. The “Liberty Belle” was present this day and proudly sat with it’s glass nose pointed skyward waiting for her next crew to climb aboard. I wasn’t able to attend the show due to work, but by all accounts, Georgia Air shows did a super job once again.

I got in touch with Ray once I found out about the B-17’s presence in my home town and we set up to visit after the show with the aircraft and before it’s next commitment on the following weekend. When Ray got a hold of me I was on a trip and would not get in until very late on the 11th of October. He suggested that if I could make it, we could ride along with the airplane on the short flight to Augusta for it’s next appearance in a few days. I was speechless! I could not believe my ears. I was going to get to ride in one of the few remaining flyable B-17’s in the world! As a matter of fact there are only 14 flyable examples in existence. I left Ray a message and planned to meet with him the next day out on the ramp at Peachtree City’s Falcon Field. I called my 18-year-old son Brian, who is training for his private pilot license and asked if he wanted to go, and like a chip off the old block, he just about fell over. I don’t think he really understood me at first or he thought I was pulling his leg. 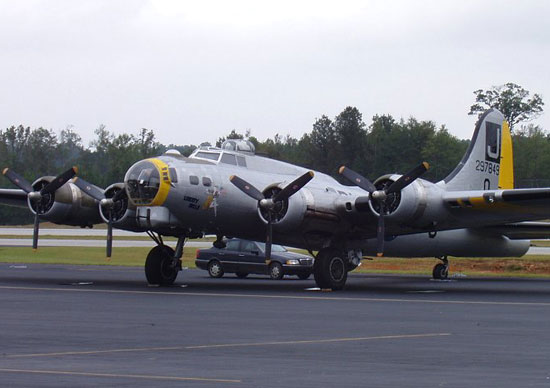