Medal of Honor: Pacific Assault. The next installment in the Medal of Honor series is set in the Pacific Theatre battlefields. There will be the typical linear storyline for the single player campaign. But what about the multiplayer aspect of the game? There hasn’t been much multiplayer information released yet, but I did learn there will be a character class system, the first time in the series, complete with a medic, engineer, sniper, rifleman, and gunner. So you can choose the role that you’re best at. There will be at least eight multiplayer maps which will be based on the single player campaign locations. It’s scheduled for November.

Brothers in Arms. Ubisoft saw all the success that Activision and Electronic Arts were getting with their “run and gun” type WW2 squad tactical shooters, and decided they wanted a piece of the pie. Enter Brothers in Arms. This one is also set in the WW2 time frame, but Ubisoft claims that Brothers in Arms will be more intense and more tactical then the others. Brothers in Arms will have a personal, more direct squad control system, where you can order teams to attack, flank, lay suppressive fire, retreat, and other squad command functions. You will be in total command of your men so be prepared! There will be a multiplayer aspect of this game, but no details as yet. Just expect the same type of multiplayer action here as in the MoH series and CoD. Brothers in Arms is expected in the first part of 2005.

Men of Valor. Men of Valor is a Vietnam squad tactical shooter, wherein you are a Marine dumped into camp in the jungles of Southeast Asia. You play through ten single player campaign missions in different areas of Vietnam. In scripted vehicle levels you’ll man the door gunner position on a Huey, and defend a riverboat from the VC hiding in the jungle banks. You’ll have scripted squad mates during your single player missions. Multiplayer is included with different styles of uniforms and equipment, and there are tons of multiplayer modes. The only one I didn’t see listed is a co-op mode for the missions, which I would hope they add before release.Men of Valor should be on shelves at the end-of-October.

Conflict: Vietnam. Yes, another Vietnam game! Notice how these things always come out in groups. Not much information on this one except that it’s set in Vietnam and you’re one of four trying to survive your tour of duty. There are 14 levels, and it seems to be scripted with the options to choose your path. No word on multiplayer, and don’t forget the first two “conflict” games, maybe they will get this one right. That’s all I’m saying. According to Electronic Boutique, it should ship first week in October. 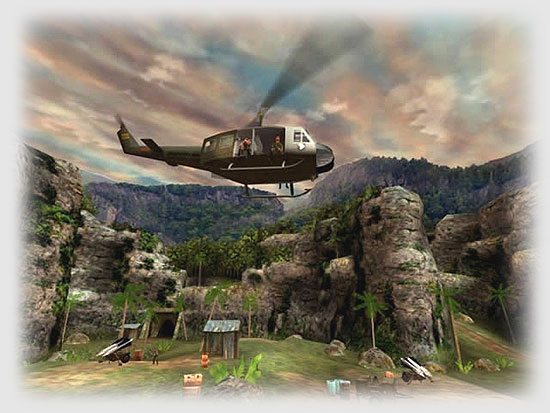