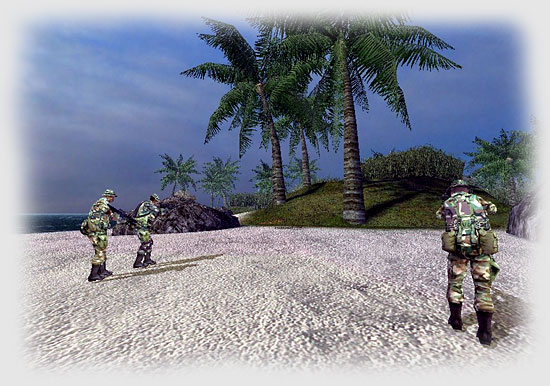 I remember back when I first played a Red Storm Entertainment computer game, it was the original Tom Clancy’s Rainbow Six. I met many of my current online gaming buddies in Microsoft’s “The Zone”, a game matching service, playing that game in co-op. It was an experience that has continued to grow on me as the years go by and new cooperative games come out.

I remember when we first heard about Ghost Recon, and how great it was going to be. I remember the day it came out, and how everyone of us in my new gaming group (over five years ago) immediately went out and bought it. That evening we connected on my Sidewinder Game Voice, (see how times have changed, now we have Team Speak), and we played all night long till something like four in the morning. I remember being off work that night, but had to start my work week the next evening. I remember coming down with a severe head cold, and having to call in for three days straight just so I wouldn’t miss any of the multiplayer action of this new and fantastic squad based shooter.

Many years later, I still have Ghost Recon installed on my hard drive along with its two official add-ons, Desert Siege and Island Thunder, along with a number of mods and mission packs. To this day, it is still one of the best computer games ever made, and one of my classic favorites.

In Tom Clancy’s Ghost Recon, the ghosts, named for the ability to be unseen, mobilize to Eastern Europe to neutralize radical ultranationalists dedicated to bringing the former Soviet Union back to super power status.

Ghost Recon wasn’t just a squad shooter, it introduced a number of new elements of gameplay. Like the ability to “take over” any person in your squad, jumping back and forth in “personal” or in “teams” to play all aspects of the game. It also introduced “points” that were rewarded to a soldier after a mission that could go into a number of stats for that character, making it kind of a role playing game in a way. Each soldier used would gain points, then you, as the gamer could assign those points in things like stealth, firepower, or leadership, (along with a few others). It also allowed the gamer to “unlock special characters” with new and special weapons by completing a task assigned in the mission briefing. The game also introduced a tactical map that was superbly well done, you could click on a fire team, assign waypoints, and even direct their cone of fire. You could control how that team reacted, if they remained stealthy, or if they should lay suppressive fire, or fire only when fired upon. For it’s time Ghost Recon was the bomb of squad tactical shooters.